Nailing the title of your movie is an essential element of the filmmaking process. In just a word or two you want to tell the audience what the movie is about, but you also don't want it to be too on the nose that it gives away the entire movie. Every now and again you get some movies with genuinely bad titles that leaves the audience scratching their heads and keeps them from having any interest in the movie. In 1981, the movie going public was given a spaghetti western by the name of 'Comin' at Ya!' a film whose title wasn't an indication of the story, but instead the wild and crazy 3D effects that would leap off the screen.

It was supposed to be a day of love and bliss for former bank robber H.H. Hart (Tony Anthony) and his wife Abilene (Victoria Abril) - it was supposed to be they day they exchange marriage vows and begin a new life together. The dream of peace and quiet was shattered when the no good, dirty, murderous Thompson Brothers Pike (Gene Quintano) and Polk (Ricardo Palacios) burst through the doors of the church. First they shoot and kill the priest delivering the services. Then they shoot Hart, leaving him for dead. As Hart is about to pass out from blood loss, the last thing he sees is the two brothers dragging his bride away.

When Hart awakens, he has one thing on his mind - revenge. Hart travels from town to town trying to find his wife and the Thompson brothers, but all he sees is the death and destruction they left in their wake. When he locates an old Irishman (Lewis Gordon) Hart learns that his wife wasn't the only woman kidnapped and stolen from their homes - the Thompson brothers have been raiding border towns all over kidnapping beautiful young women to be sold off as labor or prostitutes down in Mexico. With little time left, H.H. Hart has one chance to stop the auction, save his wife and the rest of the women, and deliver true justice to Pike and Polk.

'Comin' At Ya!' is one of those wild and crazy movies that sets up a premise and delivers the goods in a grand spectacle only in this case the premise is "how much stuff can we throw at the screen?" Nearly every single shot of the film is designed to have some sort of object leap off the screen, whether it be flaming arrows, bats, gold, beans, or even a gun barrel. Now, with the visual expectation of the film covered, I'm actually pleased to say that the pseudo-exploitation film storyline works really well. It doesn't take much to latch onto the revenge storyline and the Thompson brother's motives give their evil schemes a little extra dimension and character. 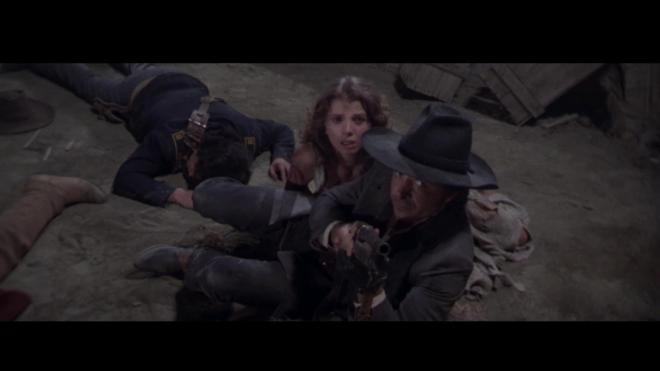 Tony Anthony is one of those filmmakers and actors whose resume is filled with titles you've probably heard of but haven't yet seen. As a natural talent for the Western genre, he almost feels too late to the party since genre veterans like Clint Eastwood and John Wayne were already in the process of hanging up their spurs by 1981. The concession that Westerns weren't in high demand doesn't keep Anthony and his fellow filmmakers and cast members from making 'Comin' At Ya!' a fun and exciting little revenge flick. The story itself is rather thin, but sometimes the thinnest stories make for the meatiest movies. While I wouldn't say that 'Comin' At Ya!' is a thematically dense film in any way, I will say that given the film's reputation as the movie that started the 1980s 3D movie craze, I was actually pleasantly surprised at how effective the main story was. 'Comin' At Ya!' is hardly original, and in point of fact, if the 3D elements weren't included the movie would be about half as long, the film still proves to be a good watch - even in 2D.

'Comin' At Ya!' is a film that is meant to be seen and enjoyed in a certain way - in 3D. The main focus of the film is to ensure that audience is ducking for cover as objects fly off the screen with a relatively thin story connecting everything together. It's an experience film. It's not as wild and off the wall as Tony Antony's 'Get Mean' but it isn't entirely something as disposable as a 3D gag film. it rests somewhere in between. How well you take to the movie is going to depend on entirely how well you enjoy this film's stylistic choices. I took to it because this film is one of those movies that is entirely self-aware. It knows that it's taking an odd time out in the middle of an action sequence to have a random object point out at the audience, and it does this frequently. For me, these breaks in flow just make it all the more enjoyable. The filmmakers and cast are clearly having fun here and if you're on board for this sort of flick, you should come away entertained.

'Comin' At Ya!' arrives on Blu-ray thanks to MVD Visual pressed onto a Region Free BD25 Disc. Housed in a standard Blu-ray case, the disc loads directly to the film's main menu. Depending on your television set, the disc will autoload to 3D or 2D without any clean and easy way to select which version you want to see.

After undergoing a recent full restoration effort produced and supervised by Tony Anthony himself, 'Comin' At Ya' makes a very strong 2.55:1 1080p debut. In 2D, the film takes on a vibrant appearance with bright and bold colors. Primaries have plenty of pop and presence to them. Some sequences are filtered into Black and white with flourishes of color peppered throughout. Film grain is retained throughout offering up plenty of amazing details to see and appreciate. The print is in pretty fantastic shape with only an instance or two of mild speckling. Occasionally the grain field would intensify during some night scenes, but otherwise, the image is stable and very good looking. Black levels are rich and inky without any contrast issues and plenty of shadow separation giving the image a natural sense of depth to it.

As for the 3D presentation of 'Comin' At Ya!' the results are a little mixed. This isn't a problem with the restoration effort but instead the technology at the time this film was made. Through the vast majority of 'Comin'At Ya!' the 3D image features an incredible amount of 3D depth with plenty of deep backgrounds and plenty for foreground pop to it. When objects fly out at the screen - they really come out of the screen, for better or worse. While my screen isn't very prone to ghosting, this film's 3D presentation comes with a regular course of it. Part of this is to do with how the effects were filmed as an object gets just too close for the 3D to keep focus. The best way to describe this is by suggesting you take your index finger, point it at your nose and slowly move it closer to your face. There is a point where no matter what you do your eyes just can't keep the image centered anymore - that's how a number of the "out-of-the-screen" effects for 'Comin' At Ya!' feel. It's almost as if the filmmakers let the object get too close and didn't cut fast enough before the blurred double image kicks in. With that in mind, I'm pleased to say that is the only real issue with this 3D transfer to report. The 3D effects come fast and furious and are a gas to watch.

'Comin' At Ya!' comes packed with an English DTS-HD MA 5.1 track as well as a DTS-HD 2.0 audio track. Overall, there really isn't a lot of difference between the two tracks. Dialogue clarity is on par between the two ensuring that every spoken line is clearly heard. Sound effects have their own special place in the mix allowing for enough atmosphere and space to give them presence as objects come whipping around the screen. The score by Carlos Savina also features fantastic resonance and never overpowers any given scene. Where the 5.1 mix may have a bit more space and during some scenes offers a better sense of imaging - especially during the flaming arrow fight - but otherwise they're a relatively equal presentation. Levels are spot on letting the quiet moments have their place while also letting the big action sequences - namely the big explosions - have their big moments.

Preview: (HD 5:35) This is a collection of highlight moments from the film, it plays like an extended trailer.

'Comin' At Ya!' is a movie that is best seen the way that it was intended - in 3D. If you don't have a 3D setup, that isn't to say the movie isn't as fun in 2D - it is - but the added depth can bring a lot of fun to the image you would otherwise miss out on. MVD Visual has brought 'Comin' At Ya!' to Blu-ray with a strong but sadly, not a perfect 2D/3D presentation. The 3D is limited by the technology of the time causing some notable ghosting issues. The audio is a blast and works wonderfully for this release. Extras are only promos and trailers. Since 'Comin' At Ya!' is really only for the 3D enthusiast out there, I'm calling this one For Fans Only.

Sale Price 9.99
List Price 14.95
Buy Now
3rd Party 5.5
In Stock.
See what people are saying about this story or others
See Comments in Forum
Previous Next
Pre-Orders
Tomorrow's latest releases