The incredible story of a hard-working student and the warped way of life that made her go wacky!

Virginia Madsen (Candyman, Sideways) and Richard Cox (Cruising) star in this humorous thriller about the bizarre happenings that occur in a prestigious boarding school. It seems to Andrea Miller (Madsen) that the upper-classmen act like robots. They're the perfect students – dedicated, involved and loyal. Their clothes are perfectly pressed and their hair is perfectly styled. It seems that the teachers have something to do with this ingratiating behavior. And when Andrea, the new kid at school, sees her friends turning into clones, she starts to suspect the worst.

The film features a great supporting cast including Sherilyn Fenn (Twin Peaks, Ray Donovan), Scott Coffey (Mullholland Drive, Lost Highway) and Paul Feig, who would go on to create the TV series Freaks And Geeks and direct such films as Spy, Bridsmaids and the 2016 remake of Ghostbusters.

I've said it before and I'll say it again - it is a hard task to create a good horror comedy. Some movies rise, some fall, some hover in the middle not quite sure where to land. It's a special sub-genre that requires a deft touch to know when and where to make things funny but then also know how to maintain an element of terror and suspense. Too much comedy makes the film a silly bore and too much horror makes the comedy awkward and tough to digest. 1987's Zombie High, directed by Ron Link and starring Virginia Madsen and Paul Feig is a movie that didn't get the balance right. The front end is too silly and the last half is an odd mishmash of horror/sci-fi elements that don't congeal into Jell-O.

For over a hundred years, the prestigious prep school Ettinger has been open exclusively to only young men. This year, however, the established faculty lead by the aged Dean Eisner (Kay E. Kuter) and under the suggestion of younger faculty Dr. Philo (Richard Cox), the school will be allowing a select few female students to attend classes. For Andrea (Virginia Madsen) this is a dream come true. For her boyfriend Barry (James Wilder) this is a nightmare because it means the end of their relationship.

As Barry leaves Andrea at her new school, something about the place just doesn't sit right. Something about the students there creeps him out and he can't get the nervous feelings out of his head. Even the presence of "normals" like the goofball Emerson (Paul Feig) and the boy-crazy Suzi (Sherilyn Fenn) fail to put Barry's worries at ease - no matter how much Andrea insists that he does. It doesn't help things when Barry finds out that one of Andrea's teachers, Dr. Philo, has an attraction towards her.

Andrea does her best to convince Barry - as well as herself - that Ettinger is a normal school, but she soon learns that things aren't what they seem. When some of the more outgoing students suddenly disappear and then reappear having conformed to the school's aesthetic, Andrea starts to get more than a little worried - especially when she notices the little puncture wounds in everyone's necks. After the death of a classmate, Andrea learns that the school isn't what it seems at all. Instead of being an educational institution, Ettinger is, in fact, an abattoir for the faculty to ingest the precious brain matter of the students in order to prolong their lives! Andrea is caught in a nightmare world that she may not be able to escape - at least not with her brain intact. 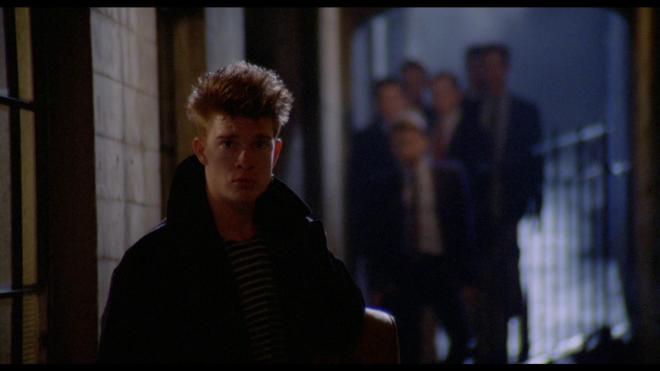 'Zombie High' is a movie that roams all over the map. It's entirely too funny one second and then entirely too deathly serious the next. One scene is a comedic satire about the state of higher education and the next becomes a cheap run-of-the-mill horror film. This seesawing back and forth between genres would have been fine if either of the genre elements had worked. The comedy flies about as well as a lead balloon and the horror aspects are too preoccupied with ripping off story beats from films like 'Invasion of the Body Snatchers' to be truly terrifying.

The biggest problem facing this film is that it telegraphs its story cues long before they arrive. Whether the next scene is going to try and be scary or silly is known well in advance and the final impact of those moments is either groan-inducing or eye-rolling. The film spends so much time going over the same ground of Andrea being creeped out by the school and Barry telling her it's not a good place that by the time anything interesting is about to happen, the momentum has long stalled out.

'Zombie High' is one of those movies that you can see the cast doing their best to make the material work, but they're just not given much to work with. Virginia Madsen tries her best, but it's almost like she's being forced to play too young. She does what she can, but she was already 26 years old by the time this film was made and fails to portray a convincing 80s high school girl. Paul Feig provides a couple of good laughs as Emerson, but even he can't save the film. About the only really convincing performance came from Sherilyn Fenn, but she's hardly in the movie beyond the need to regurgitate the point that she's a sexually active young person looking for a date.

With a name like 'Zombie High,' there is a certain set of expectations that need to be met. While I certainly didn't expect to be blown away by the film in any artistic sense, I can't deny the fact that I wasn't even entertained by this movie. It also doesn't help that in the years since this movie's initial release we got the solid fright flick 1998's 'Disturbing Behavior' which stuck to the horror elements of 'Zombie High' and used the material to better effect. Plot beats and structure-wise, they're virtually identical movies. The disjointed focus of 'Zombie High' leaves it being a mess with few scares and little genuine laughter.

'Zombie High' arrives on Blu-ray thanks to Scream Factory and is pressed onto a Region A locked BD25 disc. Housed in a standard 2-Disc Blu-ray case, the Blu-ray comes with an identical DVD of the film. On the reverse of the artwork is a small blurb about the film being shot on the USC campus and how it features a number of up and coming talents who were going to school at the university at that time.

Where to start with this 1.85:1 1080p transfer of 'Zombie High?' Perhaps this transfer is best described as if you were watching two movies. The first half is an extremely problematic and unsightly in brightly-lit scenes while the second half is stable and solid looking. Now, I don't know the condition of the print this transfer was struck from or if it was mastered from the negative, all I know is the first half is a smeary ugly mess in a number of scenes. While film grain is retained throughout, finer details are virtually nonexistent a lot of the time. Contrast is blown out to the point that the sun looks like it went supernova, colors are pasty and pale leaving flesh tones looking iridescent white. Black levels? Didn't see any real blacks or shadows to speak off as everything appears a shade of bright white. Toss in some banding, haloing, and some crunchy edge enhancement, the front end of this transfer is pretty bad in a lot of places. Then the latter half of the film kicks in and things get a bit better. Colors come back, blacks get a little more inky with only a tad bit of crush, and details are much sharper and crisper allowing you to appreciate facial features, the campus architecture, and the set design work that went into the film. Even with improved conditions, scenes shot in bright areas suffer a lot of the previously mentioned issues. It isn't a terrible image, but it's very frustrating to say the least.

Unfortunately, things don't improve much with the DTS-HD MA mono track supplied for 'Zombie High.' If you want to hear this film at all, be prepared to have to have your volume raised and then be ready to lower it as fast as you can. Levels are unbalanced as quiet conversational moments can be extremely difficult to hear and then the immediate music-fueled jump cut can blow out your audio. It's a constant battle of raising and lowering your volume. Thankfully there are some stretches in the middle and towards the end where you won't have to monitor the volume as much, but whenever the film decides to be funny, it can cause a lot of issues for the rest of the track. Because of the levels issue, dialogue can be tough to hear - especially when someone is whispering. There are some dialogue moments where a character can sound almost entirely dubbed, almost like they're talking in a different room entirely but are clearly in the shot, and yet you still can't really hear exactly what they're saying. Perhaps the best way to describe this track is as if it were once a beautiful 5.1 mix that has had all of the surround channel information forced through a single mono output. For the most part, you can hear and appreciate what is being said and happening throughout the film, but the various anomalies I mentioned become increasingly distracting.

Trailer: (HD 1:05) This trailer pretty much sums up the entire movie in 65 seconds.

'Zombie High' was a movie that I had heard of, but never seen before, and I was genuinely looking forward to - but the end result was a scattershot mess of a horror/comedy. It wasn't really all that funny and it wasn't ever scary or suspenseful. The titular zombies aren't those of the classic Romero movies so its title is a bit of a misnomer. This movie just didn't measure up to even my already low expectations. Scream Factory has brought 'Zombie High' to Blu-ray and the results are uneven. Both the image quality and audio have some glaring and obvious issues and the only extra is a very short trailer. Unless you're a big fan of the film, I'd suggest you rent it if you're curious otherwise skip it.

Sale Price 16.99
Buy Now
3rd Party 11.86
In Stock.
See what people are saying about this story or others
See Comments in Forum
Previous Next
Pre-Orders
Tomorrow's latest releases