Wings of Desire (Der Himmel über Berlin) is one of cinema’s loveliest city symphonies. Bruno Ganz is Damiel, an angel perched atop buildings high over Berlin who can hear the thoughts—fears, hopes, and dreams—of all the people living below. But when he falls in love with a beautiful trapeze artist, he is willing to give up his immortality to come back to earth to be with her. Made not long before the fall of the Berlin Wall, this stunning tapestry of sounds and images, shot in black and white and color by the legendary Henri Alekan, is movie poetry. And it forever made the name Wim Wenders synonymous with film art.

In the years prior to the fall of the city's infamous Wall, angels Damiel and Cassiel (Bruno Ganz and Otto Sander) roam the streets of Berlin, invisible to all but young children. They have always walked these grounds, since the time before the first hairy biped created in their image stood upright. They have seen great beauty, and tragedy, and wonder, and indifference. They observe, record, and testify to one another on the minutiae of the human condition. Not the grand dramatic events that mankind might believe shape its history, but the important details – the way a man suddenly looks over his shoulder into space, a woman inexplicably putting away her umbrella in the middle of a rainstorm, an old lady grasping her watch. They witness everything, even intruding into people's thoughts, but cannot have direct interaction. The angels live on a spiritual plane lacking the true richness of human life, which they can intellectually examine but never truly understand.

'Wings of Desire' (its English-language title; in German it's known as 'Der Himmel über Berlin', literally translated as "The Sky over Berlin") is a film with no big action scenes, stunts, explosions, or expensive special effects. It has no surprise twist ending, and in fact very little story or plot at all. The movie's grandest set-piece involves a group of characters looking over people's shoulders at a public library. Yet this is a work of pure cinema, a mesmerizing stream of words, images, and sounds fused together in a way that only the motion picture medium will allow.

For its first 90 minutes, the film is essentially a non-narrative tone poem. The movie is less about story than about detail, as the angels collect little fragments of daily life for their journals. The picture is moody, contemplative, and existential. It's a meditation on the human existence, and an exploration of post-war Germany, a region still haunted by its past, still trying to rebuild and to reconcile its identity, even decades after the end of World War II. Cinematically, director Wim Wenders affects a tone of forlorn detachment. His camera floats dreamily through the city streets like the angels themselves, stopping to observe briefly and then move on.

Eventually, a narrative does surface. The angel Damiel longs for earthly ties, yearns to experience and finally understand those things that the living take for granted – things like color, warmth, the taste of hot coffee, or the sensation of touching the crook of a woman's neck. The price for this knowledge is mortality, and ultimately death.

Damiel is drawn to a woman who cannot see or touch him (the late Solveig Dommartin, at her most radiantly beautiful). He's fallen in love, even though he can't comprehend what that actually means. The woman is a circus acrobat, a trapeze artist in costumed wings. While this human pretends to be an angel, the real angel wishes to forsake his immortal existence to become human. The path to that transformation requires unexpected assistance from, of all people, Peter Falk (as himself), in Berlin to film a World War II drama that forces the city to reopen a wound it has tried unsuccessfully to suppress.

In years past, I've taken issue with the last half hour of the movie, which transitions from dreamy black & white to dull color, and forces a somewhat standard love story onto the material. The lovers' first physical meeting climaxes with an interminable speech that still tests my patience. However, in subsequent viewings, the thematic weight of these scenes has become more clear and resonant.

'Wings of Desire' is certainly Wim Wenders' masterpiece. It's a beautiful piece of visual poetry with images and ideas potent enough to haunt you for years.

'Wings of Desire' was last released on DVD back in 2003 by MGM Home Entertainment in a less-than-satisfactory Special Edition. The Criterion Collection has now licensed the title and re-released it as spine # 490 on both DVD and Blu-ray. The Blu-ray disc comes packaged in one of their new clear keepcases with very nice cover art and a 27-page booklet. 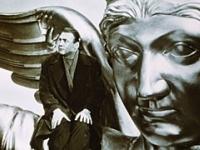 The old DVD from MGM had an extremely problematic video transfer that was marred by nasty Edge Enhancement artifacts, as if someone at the studio took the movie's angelic themes too seriously and decided to give all the characters bright electronic halos. The disc was also presented in a compromise 1.78:1 aspect ratio (halfway between the 1.66:1 European and 1.85:1 American theatrical ratios), and had color temperature issues with the black & white imagery. As expected, Criterion's remaster is a significant improvement in all respects.

According to the liner notes in the accompanying booklet, the Blu-ray's 1080p/AVC MPEG-4 transfer was supervised and approved by Wim Wenders. The movie is presented in his preferred 1.66:1 framing, with small pillarbox bars on the sides of the screen. The opening credits mark this as an English-language print with the 'Wings of Desire' title (rather than the original German title, 'Der Himmel über Berlin').

The black & white sections of the movie have accurate gray scale and no Edge Enhancement artifacts at all. The photography is grainy by design, and that grain has been retained with its original filmic textures. Perhaps more than any other title available on Blu-ray at the moment, this disc makes a very strong argument for the beauty of proper film grain.

The picture is not necessarily razor sharp, but is decently-detailed and has a consistently pleasing film-like appearance. The contrast range appears correct, without any unwarranted artificial boosting. Although black level never reaches especially deep, it doesn't appear as if it's supposed to. Shadow detail is always well preserved.

The color portions are also much improved over the older transfer. Like all modern black & white productions, the movie was shot on color film stock and later desaturated in the lab. Nevertheless, the previous transfer left the color interludes with the appearance of having been colorized from black & white stock. That's not the case here. Colors are true, and these segments are sometimes remarkably crisp and clear. They don't have nearly the same luster as the black & white images, but that's thematically appropriate.

My only complaint is some occasional but repeated streakiness in the movie's grainier scenes. That's very likely an artifact of the original film elements, not a transfer flaw. This is a beautiful disc all around. 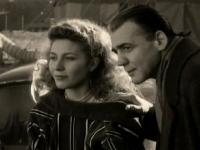 The movie's soundtrack is encoded in DTS-HD Master Audio 5.1 format. Back in 1987, the movie played with a Dolby Stereo mix. Criterion's usual policy is to preserve the original sound format. However, the remix here was also supervised and approved by Wim Wenders. As with the video, it's another big improvement over the 5.1 mix on the MGM DVD, which had flat dynamic range and buried the dialogue track to near inaudibility. That's not at all a problem on the Blu-ray.

The new 5.1 mix is less aggressive than the old one, but also less gimmicky. The surround channels are used to create an effective sense of envelopment. Dialogue is perfectly audible at all times, though the thought narration is generally clearer than the speaking parts (intentionally so). Music is reproduced in excellent fidelity, especially the resonant cello strains. This is a full-bodied track, with a few surprisingly loud stretches, such as the Nick Cave concert. Dynamics are deep and rich.

The disc contains only the original language track, which is primarily in German with a few sections in English. The default English subtitles translate only the German parts. You'd think that should go without saying, but again that's something that the old MGM DVD got wrong.

The Blu-ray shares all of the bonus features from the comparable Criterion DVD. Although many of these features are encoded on disc in 1080i resolution, the majority have clearly been upconverted from standard definition (either NTSC or PAL) sources.

'Wings of Desire' is one of the true masterpieces of modern German cinema. Criterion's Blu-ray edition finally does justice to the movie's wonderful photography and sound design, and also has some interesting supplements. Highly recommended.

Sale Price 25.4
Buy Now
3rd Party 26.96
In Stock.
See what people are saying about this story or others
See Comments in Forum
Previous Next
Pre-Orders
Tomorrow's latest releases