Rookie police officer Jessica Loren (Juliana Harkavy - “The Walking Dead”) has been assigned the last shift at a closing police station and must wait for a hazmat crew collecting biomedical evidence. Ordered not to leave the station under any circumstance, Jessica comes to learn that it’s more than just an outdated station, it’s home to the ultimate embodiment of evil and his devoted followers. Cult leader Paymon has haunted the station ever since he and two of his followers committed suicide on the night of their arrest. Jessica is left to fend for herself in the devil’s playground.

Low budget horror movies are a dime a dozen, in fact, they're practically a staple of the direct to video or VOD marketplace. What isn't as common place is actually finding a good low budget horror movie. It feels like a lot of times a filmmaker that is looking to strut their stuff turn to horror because there is this prevailing misconception that it is an easy genre. It isn't. Just like a drama or a comedy, it's just as hard, if not harder, to scare the daylights out of someone as it is to make them cry or laugh. That's why when you find a good low budget horror movie it's especially exciting. 'Last Shift' may not be a groundbreaking entry into the genre but as what amounts to a haunted house flick, it lines up a lot of the best elements in the right places producing a film that provides more than a couple good scares.

For rookie officer Jessica Loren (Juliana Harkavy), her first night on the job was supposed to be an easy one. As the police station she's been assigned to is moving to a new location, the old one is supposed to stay open for just one more night. As her gruff veteran superior officer Sergeant Cohen (Hank Stone) tells her, this is an assignment a trained monkey can do. All of her calls should be already forwarded to the new location. That leaves her with taking care of any stragglers that come by and waiting for a hazmat team to dispose of some outdated evidence left in the storage room.

Even though this is a slow boring first night, Jessica is grateful to be a part of the team. Her father Steve (Randy Molnar) was a hero cop who died in the line of duty saving a group of women who were kidnapped by a satanic cult. The reason the precinct location is being shuttled is the fact that the cult leaders who were captured killed themselves on the premises after their interrogations. It doesn't look good for the local police when three prisoners hang themselves in their holding cells.

Everything starts slow and easy for Loren. The only eventful moment was a homeless man that decided to wander into the precinct and urinate on the floor. After Loren cleans up that mess, she gets a strange phone call. A young girl on the other end of the line tells her there are dead bodies everywhere and she's in danger, only the girl hangs up before the intrepid junior police officer can get a name or an address. That's when all hell starts to break loose. First the lights flicker, and in the darkness Loren hears and sees strange things, things that can't possibly be real. As the nightmarish sights and sounds continue, Loren's sanity is pushed to the brink. Is it some hazing ritual designed to intimidate the rookie? Or could it be the damned souls of the cultists out to terrorize Loren on her first night as a police officer? 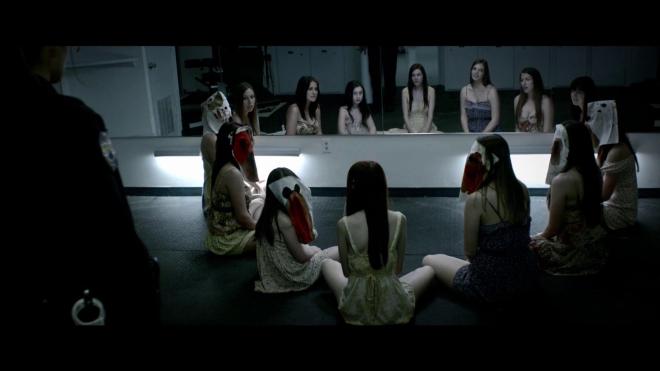 'Last Shift' in essence is a slice of 'The Haunting' mixed in with a few sprinkles of John Carpenter's 'Assault On Precinct 13' for a little extra flavor. As a haunted house sort of movie, it's a fairly by the book affair, but the location of an abandoned police precinct, the slim cast, and some impressive practical visual and makeup effects make up for any story shortcomings. Writer and director Anthony Diblasi and his co-writer Scott Poiley have done a fine job of playing up all of the best elements that make a fright film work. A singular hero in a creepy location along with some great uses of lighting and sound create an atmosphere of dread that slowly builds until a rousing and frightening climax.

If you ever need an example of a horror movie that understands the importance of pacing, look to 'Last Shift.' This is a movie that takes its time to setup everything, introduce the characters ,and then start populating the scenery with a couple quick scary views of the ghosts, before is taps the brakes ever so slightly. It then presses the gas a little harder, revs up the engine, and then lets off a little to give you a breath right before it nails you with a surprising and effective jump scare. Along for the ride is poor Juliana Harkavy as Jessica Loren. I gotta give her credit for being able to play her character with some weight and confidence, even when all hell is breaking loose. While I like to pretend that I'm someone who would know what to do and hold it together, in reality in a situation that looks and sounds exactly like playing the first 'Silent Hill' game for Play Station from years ago - I think I would have run out the door long before the film's grand finale.

It's been a while since I had a movie hit me like that with some solid jump scares and 'Last Shift' delivered the goods. While I thought the movie struck the right mood and atmosphere, the viewing conditions for this one need to be just right. Make sure you have the lights out, it's dark outside, and that you have your surround system ready to rumble. This is a movie that I feel like would lose some of it's extra oomph in the scares department had the sound mix not been given so much TLC.

In a year where we got flicks like 'It Follows' and 'The Babadook,' 'Last Shift' is a welcome addition to the pack. It may not stand out from the large shadows those other films cast, but this movie does a great job at standing on its own. Given the cover artwork, I wasn't expecting to get this much enjoyment out of it. The film's use of practical makeup effects is a welcome sight and the creature designers have conjured up some impressively gooey and disturbing images that will swim around in your head when you go to bed. I'm really trying not to over sell this one, but I genuinely think that 'Last Shift' is absolutely worth a watch on a dark and stormy night.

'Last Shift' arrives on Blu-ray thanks to Magnet and is pressed onto a Region A locked BD25 disc. Housed in a standard eco-friendly Blu-ray case, the disc opens to some trailers for other Magnet releases before arriving to its animated main menu.

When you take into account that most of this film takes place in the dark, 'Last Shift' offers up a frightfully effective 1080p 1:85:1 transfer. This is a rather cool looking film throughout. Flesh tones are a little on the pale side and the film's main lighting sources are bright white office lights. To the effect that this has on creating a creepy film, it works strikingly well. This scheme allows for some deep and inky blacks with rich shadows to create a film that has a fantastic sense of depth, even in tight and claustrophobic spaces. Detail levels are very strong throughout allowing you to appreciate fine facial features, the disarray of the precinct, as well as the fantastic makeup effects for the precious brief moments you get to see them. By the time the film gets to its rousing finale, most of the film is lit with a flashlight, but what you see in that narrow beam of light can be terrifying and comes through with fantastic clarity. All around this is a creepy and effective image.

Sporting an English DTS-HD MA 5.1 audio track, 'Last Shift' earns some strong marks for its use of atmosphere and sound effects to create a creepy vibe throughout. Most of the track keeps to the midranges but as the tension of the film builds I could detect, ever so slightly, this low rumbling dissonant tone that slowly builds. It never creates any kind of distortion or interrupts any of the other sound elements, but it starts to push the subwoofer a little and by the end it's a nice effect to hear. Dialogue is crisp and clean, even though it's really one actor on their own for most of it reacting to the creepy sights and sounds that happen all around them. This leads me to the track's incredible use of imaging. Even when nothing much is happening on screen, those surround channels are constantly being engaged and used to great effect. Also there's a damn creepy song some disturbed children sing throughout a lot of the movie, so there is that extra fun bit of nightmare fuel that this sound mix does a great job of needling into your head.

A Journey Into Hell: The Making of Last Shift: (HD 10:19) This is a fairly standard EPK style extra feature with the producers, cast, and other crew talking about the making of the film. It's not able to go very in-depth, but it's still pretty good.

The Sound of Evil: Behind The Foley/Sound Design: (HD 5:59) A fun but interesting look behind the scenes look at what went into the making of the film's sound effects.

Paymon Interrogation Viral Video: (HD 0:44) A quick bit of viral marketing and look at the creepy cult leader in the film.

Behind The Scenes Photo Gallery: (HD 3:20) The gallery is made up of a bunch of set photos featuring some of the shooting, but mostly the makeup application for some of the signature ghouls.

Poster Gallery: A series of 8 photos that you can control the navigation of. It's an interesting look at the evolution of the film's marketing and the eventual title change from 'Pamon: The King Of Hell' to 'Last Shift.'

The Ballad of a Green Screen Guy: (HD 4:40) This is just straight funny, mostly because there is very little actual digital effects on display throughout the film. Nice to see the people who made this movie have a sense of humor.

'Last Shift' was one of those flicks that I had pigeonholed as a run-of-the-mill cheap independent horror movie that was light on scares and even lighter on genuine talent. Thankfully that assessment was dead wrong in all of the best ways. Perhaps it was because I went into this with low expectations, but in the end I thoroughly dug this effective little fright flick. It had me jumping and that is no easy feat to say the least. With a strong and creepily effective A/V presentation and a few informative extras, Magnet did a bang-up job bringing this Blu-ray disc together leaving me to call this one recommended.