When corrupt Roman leader Tiberius (Adrien Brody) arrives with a giant army to claim the Silk Road, Huo An (Jackie Chan) and his group of trained warriors teams up with an elite legion of defected Roman soldiers, led by General Lucius (John Cusack), to maintain the delicate balance of power in the region. To protect his country and his new friends, Huo An gathers the warriors of thirty-six ethnic nations together to fight Tiberius in an incredible, epic battle.

Historical Epics have been a staple of blockbuster filmmaking since the very beginning. Take a relatable story about a few people and place it against the background of a major event in history and you've laid the groundwork for a tale that captures the hearts of an audience. However, that doesn't mean every historical epic works. Take 'Dragon Blade' for example. It's an entertaining movie, but it also never quite overcomes the strangeness of the fact that it's a film starring Jackie Chan, John Cusack, and Adrian Brody in a Roman/Chinese war epic.

The Silk Road is a convergence of cultures. It is the place where the West meets the East in an intersection of trade and commerce. This is a fragile place and it needs protection from outside forces. Huo An (Jackie Chan) and his men are members of the Silk Road Protection Squad where it is their job to ensure peace is maintained and that any conflict between cultures and nations is solved quickly and with as little violence as possible. When Hou An is betrayed by his superiors, he and his men are banished to Goose Gate, a far off city that is the center of the Silk Road and is in desperate need of repair. Hou An and his men are now part of a prison camp tasked with rebuilding the walls. Hope for Hou An comes from an unlikely source.

On the horizon is a brigade of elite Roman soldiers lead by the fearless Captain Lucius (John Cusack). Lucius and his men are part of a disgraced legion who are dedicated to saving the life of the young boy Publius (Jozef Waite) who is the true heir to the leadership of the entirety of Rome. After narrowly surviving an assassination attempt by his older brother Tiberius (Adrien Brody), the now blind Publius is in the protective arms of Lucius who will do anything to ensure the safety of his charge - including giving his own life. Seeing a kindred spirit, Huo An forms a friendship with Lucius and together they set out to rebuild Goose Gate as a home for outcasts who have nowhere else to go. But the dream of a peaceful convergence of cultures and nations is threatened by the news that Tiberius and an entire Roman legion are headed for the city. 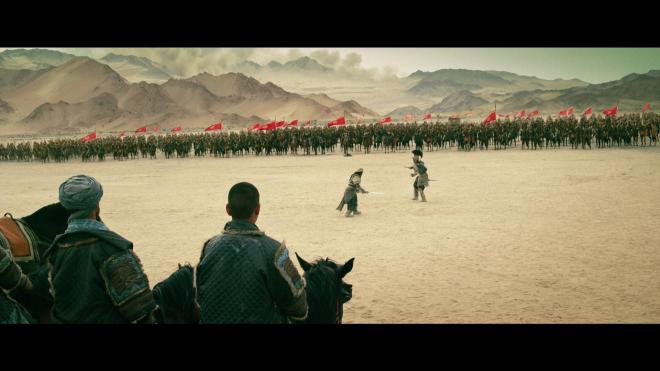 'Dragon Blade' is a movie that is more than a little difficult to make sense of. Part of the problem is the way the film is edited. Jump cuts abound in such a frequent and fervent manner that the first third of the movie is nearly incomprehensible. It would take a roadmap and an annotated script to understand what is happening at what time within the story at any given point. Once Hou An and his men arrive at Goose Gate, things even out for a bit and even though the jump cuts maintain throughout, it does get easier to get a hold of.

Where this movie is a bit of an oddity is the fact that it takes place sometime around 50 B.C. and yet the vernacular is modern. While an accent can be forced and sound fake, but at least some actors give it a go. John Cusack, on the other hand, just sounds like he got off the Red Line in Chicago to go to a White Sox game in full roman soldier regalia. Jackie Chan, for a while anyway, tries to make the film feel like a formal piece of history, but by the time some kung-fu hokum is called for, all pretenses are thrown out the window. Then you have Adrian Brody, one of the finest actors working today. Here Brody just looks and sounds like he's inhaling and exhaling his lines through his nose, I've never heard so much exaggerated sniffing while someone talks. It'd be irritating if it wasn't so hammy and entertaining to watch - clearly the man was having fun!

If you're going to watch 'Dragon Blade' as an honest, true-to-history epic, you're going to be disappointed. If you're going into it as a ham and eggs action adventure film, you should be in a good place to have some fun. This movie is just so odd that if you try to take it seriously you risk mental injury - so don't do that. It took me awhile to just turn my brain off and stop trying to understand it and just enjoy it. The best part of the film is Jackie Chan and the impressive fight choreography, it's pretty cool to see wild kung-fu action with heavy armor and ancient weaponry. That said, this movie is absolutely not for everyone, so don't be surprised or upset if you don't gel with it, it took me two attempts to finish myself.

'Dragon Blade' arrives on Blu-ray courtesy of Lionsgate and is pressed on a Region A locked BD50 disc. Housed in an eco-friendly Blu-ray case with identical slipcover, the disc loads directly to an animated main menu. A Digital HD voucher is also included.

It's rather difficult to know what to make of the 2.40:1 1080p transfer that has been provided for this Blu-ray release of 'Dragon Blade.' I say difficult because this was one of the largest produced and biggest 3D successes in China over this last summer. The 3D is the main sticking point here. This is a film that has the look and design for 3D with objects and people flying right at the screen complete with cheap looking CGI effects to make the film look bigger and deeper along the Z axis than it is - unfortunately, this film isn't in 3D. This 2D presentation looks oddly flat at times. Some scenes where you can tell there was some impressive 3D depth is void of any depth at all in 2D. Details are strong for this digitally shot film, especially facial features and costuming and the impressive set design look fantastic. Colors take on a warmer yellow tone but don't distractingly skew primaries or alter flesh tones. Black levels are strong with blacks reaching that rich inky tone, but again, that sense of depth is oddly absent for a number of scenes. This is one of those movies that I would have really liked to have seen the true 3D version because it may have helped me appreciate the film a tad better.

Sporting an English/Mandarin DTS-HD MA 5.1 audio track, 'Dragon Blade' is a bit of an auditory mixed bag. Some moments in the film sound absolutely fantastic. Fight sequences are full of life and thoroughly immersive allowing you feel every punch, kick or turn your head when an arrow zips around the channels and across the screen. Then people talk. It's not that you can't hear what is being said, it's just that so much of the dialogue sounds canned. No one appears to have been dubbed by another actor, but at the same time, there is a flatness to dialogue at times that is very distracting. Overall the track is pretty fantastic, but the hollowness to some of the dialogue really stands out for me. Levels are just fine as there aren't any notable spikes or drop-offs that would require you to adjust your volume.

Behind the Scenes of Dragon Blade: (HD 21:28) This is your tried and true Cast/Crew E.P.K. material here, but it's still pretty good and informative.

Extended Interviews with Cast/Crew: (HD 56:13) So there is actually a great deal of content here that didn't make it to the final version of the Behind the Scenes of 'Dragon Blade' extra feature. While that extra was pretty good on it's own, this extra stuff is a nice complement should you feel the need to enjoy it.

'Dragon Blade' is one of those movies that can be chalked up as entertaining, but it's still not a very good film. The confusing story structure doesn't help, but seeing as how this film was clearly designed for 3D, I'm having a tough time saying that I've truly experienced this film with this 2D only presentation. Lionsgate has done a decent job bringing the film to Blu-ray with a solid A/V presentation and a couple of pretty good extra features. Martial Arts fans and people who dig on Jackie Chan should have fun, but otherwise, it's tough to recommend the movie. Give it a rent.