Action veteran John Flynn (Rolling Thunder) directed this tough-as-nails thriller about a merchant seaman (Jan-Michael Vincent, Vigilante Force) taking on a gang of thugs. Merchant mariner Tommy (Vincent) is stuck in New York's tough Lower East Side, waiting for his next ship to sail. He mostly keeps to himself, though he takes a liking to a pretty local woman named Marsha (Theresa Saldana, The Evil That Men Do) and befriends a kid (Fernando Lopez, Frankie and Johnny) and an old veteran (Art Carney, The Late Show). But he also finds the neighborhood plagued by a rough, violent gang called the Souls, led by Angel (Rudy Ramos, Quicksilver). Tommy stands up to the gang, and his behavior encourages others in the neighborhood to fight back against their tormentors. The supporting cast includes Danny Aiello (Fort Apache the Bronx), Frank Pesce (Killer Fish) and Tony Sirico (The Sopranos).

The 70s and 80s saw the rise and fall of the everyman action hero. These were the men who were just regular guys that were called upon to deal with a major societal problem, and it usually involved them grabbing a gun or picking up a two-by-four or a big stick. These movies work because the heroes are in some way average enough to be relatable and they're dealing with a tough moral issue that strikes close to home. 'Defiance' stars Jan Michael Vincent as the everyman who aims to take on the tough New York gangs with a stickball bat.

Tommy is a seaman who just got kicked off his last ship, trapping him in New York City with limited funds and no place to stay. With a union suspension hanging over his head, he's got a tough few weeks of not being able to work ahead of him. When his union boss lets him know a friend offers cheap apartments in the city, Tommy has no choice but to move in - even though it's located in the heart of one of New York's toughest neighborhoods. If Tommy had his way he'd keep to himself until his next ship came in, but unfortunately, he has a bad habit of befriending the colorful locals.

The first person he meets is the beautiful Marsha (Theresa Saldana), a nice accommodating young woman who develops an instant attraction to Tommy. Then there are the ragtag Kid (Fernando López) and former boxer Whacko (Lenny Montana) who provide Tommy an infinite amount of amusement while also being the first to accept him into the neighborhood. Coupled with friendly grocer Abe (Art Carney) and the former tough guy Carmine (Danny Aiello) - New York living isn't so bad for Tommy. Of course everything changes when Tommy runs afoul of the local gang known as The Souls lead by the murderous Angel Cruz (Rudy Ramos).

Because Tommy confronted one of the Souls for harassing him, he earns a savage beating in a subway restroom. Because he stood up for Kid after they broke the boy's arm and destroyed the kid's rooftop garden, Tommy is threatened at gunpoint in his own home. After the Souls attack and kill someone from the neighborhood, Tommy has no choice but to stand up against Angel Cruz and The Souls and unite an army of fed up locals into an all out war for the neighborhood. 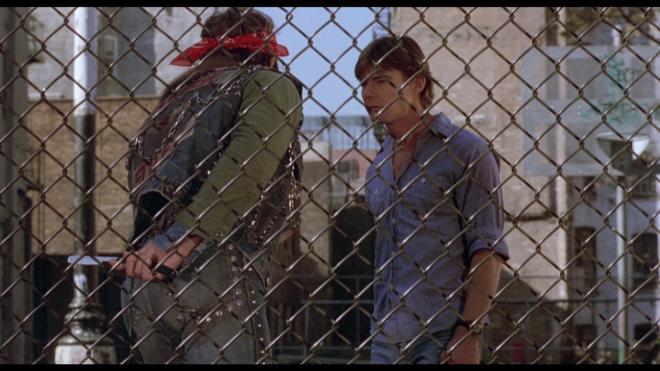 'Defiance' in a nutshell, is 'Walking Tall' without a pudgy Joe Don Baker and replaced with a shaved Charles Bronson-style everyman from 'Death Wish.' Having not been from New York, let alone actually being alive in 1980, I can't really speak to the accuracy of the depiction of the conditions of the neighborhood. There certainly is a sense that New York, especially The Bronx, of being overridden by colorful gangs. After all why else would we have 'The Warriors' or '1990: The Bronx Warriors' let alone the countless other gang movies of the time? Putting accuracy aside, I'm left with story and character to judge the film by.

Written by Thomas Michael Donnelly and directed by John Flynn, 'Defiance' is a movie that knows what it is and doesn't try to be anything more than the sum of its parts. Sure there is this message for civic and societal responsibility towards dealing with the gang troubles, but that's pretty standard stuff. Overall the film is fairly paint by the numbers as our hero played by Jan Michael Vincent is reluctant to integrate himself too deeply within the community, nor is he very willing to stand up to The Souls, even after they beat the crap out of him. He's a guy that doesn't want the burden of responsibility until he has no other choice but to take a stand. To that end, the movie works really well. The love plot involving Vincent's Tommy and Theresa Saldana's Marsha is a little hammy, if only because it seems like they become an item awful quick. Who I really enjoyed seeing again is Lenny Montana as Whacko. Even when he was being garroted to death in the 'Godfather,' Montana had an innocent charm to his big tough guy personality and it's on full display here in 'Defiance.'

As a piece of pulp entertainment, 'Defiance' is a winner. It has simple but compelling characters, a strong cast, and just enough of a mix of drama and action to be interesting. If you try to take away 'Defiance' from this simple 80s B-movie structure the whole thing falls apart. As I mentioned with 'Walking Tall' and 'Death Wish,' this movie has been done before, many, many times over. There really isn't anything new to the show other than a different villain with Angel Cruz and the fact that Jan Michael Vincent uses a stickball bat. But even to those ends, the film is a great little piece of entertainment.

'Defiance' arrives on Blu-ray from Kino Lorber and their Studio Classics line pressed on a Region A locked BD25 disc. Housed in a standard case, the disc opens directly to the main menu.

Given its status as a B-movie from 35 years ago, I wasn't expecting much from 'Defiance' but I'm pleased to report that the film's 1.85:1 1080p transfer looks pretty darn good. With film grain retained and no signs of DNR or any egregious usage of edge enhancement, detail levels are strong throughout and preserve the natural look of the film. Actors, costumes, the rough looking buildings, and especially the awesome cars of the era get a kick out of their improved detail levels. The print is in fine shape with only slight to minimal speckling apparent. Color for the film still maintains that 1970s olive drab kind of vibe but are still reasonably accurate with strong primary presence and accurate flesh tones that leave some actors looking a little pink but otherwise healthy. Black levels and shadows separation are strong and look the best during daylight scenes. The only thing really knocking back my score for this is the amount of crush during night shots that can create a number of floating heads during the film's big climax.

Sporting a DTS-HD MA 2.0 audio track, 'Defiance' sounds about as good as it looks. This stereo mix offers up just enough imaging to keep things interesting - especially during street sequences where there are plenty of background and ambient noises moving between the channels. The dialogue is clean and easily heard and there weren't any detectable age-related hiss or other anomalies worth reporting. The movie is for the most part fairly quiet and conversational. The only spikes come during the big action beats when the music kicks in and there is a lot of yelling. Even during the intense moments, levels stay nice and even keeping to the midranges. Dialogue, sound effects, and the film's score by Dominic Frontiere have plenty of space to breathe without any distracting overlap or distortion. A fine audio track all around.

Defiance Trailer: (SD 2:27) An aged trailer that actually serves the movie well, also makes it easy to appreciate how much better 'Defiance' looks now that it's on Blu-ray.

Vigilante Force Trailer: (HD 2:49) All I can say about this trailer is that I want to see this movie really badly now! It looks like a great bit of B-movie fun!

'Defiance' is by no means award-winning filmmaking, but then it never sets out to be, it's just good fun entertainment. It may not do anything new as an everyman action movie, but what it does do works and proves to be a worthwhile watch. Kino Lorber has done a pretty solid job bringing this back catalogue title to Blu-ray with a solid A/V presentation. The only extra features are a couple of trailers. 'Defiance' is certainly worth a look.