I Spit on Your Grave III: Vengeance is Mine

Jennifer Hills (Sarah Butler) is still tormented by the brutal sexual assault she endured years ago (I SPIT ON YOUR GRAVE 2010). She’s changed identities and cities, reluctantly joining a support group where she begins to piece together a new life. But when her new friend’s murderer goes free and the tales of serial rapists haunt her, Jennifer will hunt down the men responsible and do what the system won’t – make them pay for their crimes in the most horrific ways imaginable. Only this time, no jury may be able to save her. Jennifer Landon (“The Young and the Restless”), Doug McKeon (ON GOLDEN POND) and Gabriel Hogan (“Heartland”) co-star in this unforgiving, unmerciful and uncut new chapter of one of the most notorious franchises in movie history.

Filled with brutally violent and often cringe-worthy moments of graphic gore that will have male viewers crossing their legs and shrinking in shock, 'I Spit on Your Grave III' is a direct follow-up to 2010's remake of the highly-controversial 1978 cult classic. It picks up some years after the gruesome events of the first movie with Sarah Butler reprising her role as Jennifer Hills, now living an average 9-to-5 life in Los Angeles under the new alias Angela. Despite being a micro-budgeted, direct-to-video sequel — and it definitely shows in the production value and the barely competent journeyman camerawork — the movie manages to surprise with a reasonably engaging story on the aftermath and psychological damages caused by the horrific experiences. Suffering from PTSD, Jennifer/Angela is abrasive and withdrawn, immediately assuming men only think her as a sexual prey, ruining potential friendships with benevolent, well-intentioned coworkers. Although she attends nightly group meetings in an effort to remedy and manage a passionate rage stewing deep inside, Angela is really a sleeping dragon waiting to be woken.

It's this very element and aspect of the script, written by Daniel Gilboy making his move from producer and other miscellaneous functions, which makes this third feature in the franchise a marked improvement over the terribly-misguided remake while also distinguishing it as the best entry in the series. The first sequel from 2013 introduced a new, unrelated character with the similar vigilante concept of inflicting violence upon her assailants, which made for an interesting but ultimately tolerable and forgettable watch. Here, Meir Zarchi returns as producer — who, by the way, is also working on a follow-up to his own original film set nearly forty years later — where filmmakers explore a damaged heroine attempting to cope with a society she views as still treating women as second-class citizens. Fascinating a premise as that already is, the movie unfortunately takes a while to find its proper footing, exerting more time and effort on setting up towards Angela's ill-fated breakdown, which can be seen coming within a matter of minutes. This gradual build up is at once well-paced and somewhat slow and a tad prosaic. 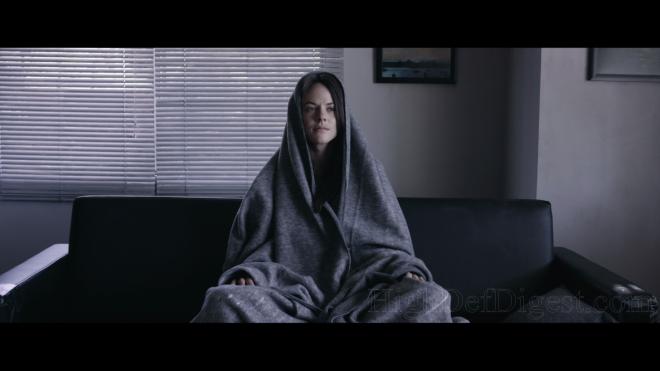 Much of this donkeywork, which some might argue necessary for character development, is largely the result of Angela's perception of the men in the city, lacking a convincing context bearing any resemblance to 21st Century reality. The problem is viewers not being given a clear-cut way of discerning if Angela is really being verbally assaulted by random men on the street or if that's how she perceives herself being viewed by the opposite sex. Is a homeless man near a bus stop as vocally explicit as the random thugs who menacingly surround Angela just so that they barrage her with disgustingly unwelcomed flirtations? The only clue offered to audiences are Angela fantasizing savage acts of violence, which not only hint a break from reality but also indicate a deep-rooted desire she exhaustively works at suppressing. This provides respite from the other monotony while adding to our protagonist's dilemma. And for a moment, she finds a healthier means of expressing her darker inclinations through a budding friendship with Marla (Jennifer Landon), a vocal, high-spirited personality and survivor. The two join forces for exacting justice to the victims of sexual assault without the torture or killing, but this only lulls Angela's desires for a while.

Through all this, director R.B. Braunstein interrupts the proceedings with scenes of Angela in therapy sessions wrapped in a gray, itchy-looking blanket, suggesting she's working through her issues by day while finding deliverance from her demons by night. But those demons are soon aroused into a fit of vengeance after Marla is unexpectedly murdered and the likely suspect released for insufficient evidence. This then becomes the recurring theme of 'I Spit on Your Grave III: Vengeance is Mine' while also launching into depictions of brutal, gorily vicious acts of retribution for the guilty when the law fails to provide justice for the victims. In Angela's descent to psychopathy and violent derangement, the morality of her actions are effectively distorted and complicated because we're privy to the stories of other victims in the group, for whom Angela believes to be a service. There's just enough in the movie to warrant a recommendation and appreciate the filmmakers' lofty aspirations, especially for fans of the franchise, but it also comes with some drawbacks that keep it from breaking loose of its limited budget and production.

Anchor Bay Entertainment brings 'I Spit on Your Grave' to Blu-ray on a Region A locked, BD25 disc housed inside a blue, eco-cutout case. After a couple skippable trailers, viewers are taken to the standard menu window with full-motion clips and music playing in the background.

Jennifer returns to spit on more graves with a squeaky-clean but equally bland 1080p/AVC MPEG-4 encode. Shot entirely on HD cameras, the video comes with an ultra smooth digital appearance that lacks any texture or style, making it largely unattractive yet highly detailed. Fine lines and objects are razor sharp, exposing every crevice of every room, the distinct stitching in clothing, and lettering on store windows and buildings. Facial complexions are sadly lackluster and the cast generally looks pale, but the smallest blemish, wrinkle and pore is very well-defined and discrete. Contrast levels fall on the lower end of the grayscale and often somewhat flat, making for a rather dreary looking presentation, yet whites remain crisp and bright. Primaries seem affected by this with colors appearing pretty drab and flavorless though still overall accurately and cleanly rendered. The most attractive aspect are strong, deep blacks with excellent shadow details throughout, providing the 2.35:1 image with a great deal of dimensionality.

Partaking in the gruesome vengeance is a very good Dolby TrueHD soundtrack that nicely delivers some worthy justice to the guilty. Imaging is wide and welcoming with excellent separation and movement between all three channels, generating an engaging and often highly active soundstage. Background activity pans across the screen fluidly with appreciable discreteness, and the mid-range exhibits sharp details and distinction between the high and lows. Low bass isn't particularly impressive or standout, but it complements the action and music very well with discernible weight and a measurable response. Amid all the violent retribution, vocals remain well-prioritized, yet a bit on the ordinary side and somewhat lackluster. Also, rear activity is relatively disappointing given this is a very recent release, as the surrounds are rarely utilized and largely fail to add anything significant to the soundfield. However, when an ambient effect does travel to the surrounds, they are sadly localized and almost distracting. Still, since much of the action takes place in the fronts, the lossless mix is plenty enjoyable.

Brutally violent with often cringe-worthy moments of graphic gore, 'I Spit on Your Grave III: Vengeance is Mine' is a direct follow-up to 2010's remake of the highly-controversial 1978 cult classic. Capable of making male viewers cross their legs and shrink in shock at the violence, the micro-budgeted production is a marked improvement over its immediate predecessor, offering a more engaging story that effectively makes gorier sequences all the more visceral and horrific. The Blu-ray arrives with a strong but still rather bland audio and video presentation with some minor aspects worth appreciating. The overall package, unfortunately, is a barebones release, but nonetheless worth checking out for fans of the franchise.

Sale Price 14.99
List Price 19.99
Buy Now
3rd Party 39.99
In Stock.
See what people are saying about this story or others
See Comments in Forum
Previous Next
Pre-Orders
Tomorrow's latest releases