The Epic of Everest

The 1924 Everest expedition culminated in the deaths of two of the finest climbers of their generation, George Mallory and Andrew Irvine, and sparked an ongoing debate over whether or not they did indeed reach the summit. THE EPIC OF EVEREST (1924) is an awe-inspiring travelogue of their perilous journey.Filming in brutally harsh conditions with a specially adapted camera, Captain John Noel captured images of breathtaking beauty and considerable historic significance. The film is also among the earliest filmed records of life in Tibet and features sequences at Phari Dzong (Pagri), Shekar Dzong (Xegar) and Rongbuk monastery. But what resonates so deeply is Noel s ability to frame the vulnerability, isolation and courage of people persevering in one of the world's harshest landscapes.The restoration by the BFI National Archive has transformed the quality of the surviving elements of the film and reintroduced the original colored tints and tones. Revealed by the restoration, few images in cinema are as epic or moving as the final shots of a blood-red sunset over the Himalayas.Special Features: Introducing THE EPIC OF EVEREST with Sandra Noel, Scoring THE EPIC OF EVEREST with Simon Fisher Turner, Restoring THE EPIC OF EVEREST with BFI curators, Trailer

I suppose it's human nature to dream big and wish to conquer the impossible. Whenever we see an obstacle, we'd just assume go over it rather than around it. As we currently look past our moon and out to the stars towards Mars, we forget that it was less than 70 years ago that the Earth's tallest peak was conquered by Edmund Hillary and his Sherpa Tenzing Norgay. Everest has always been seen as a triumph of human will and endurance. It is a mountain that has attracted thousands of climbers and has taken more than 250 lives. One of the most famous and fatal attempts was in 1924 when George Mallory and Andrew Irvine lost their lives attempting the summit. Because Captain John Noel brought camera equipment, we have a complete and visually incredible first-hand account of the disastrous attempt with 'The Epic Of Everest.'

Using then state-of-the-art camera equipment, Captain Noel details the team's journey through Nepal, and in a sense, works as a sort of travelogue. In 1922, Noel was part of Mallory's previous failed summit attempt and the sights of the people and their way of life were only briefly covered in his film 'Climbing Mount Everest.' After that failed attempt, this summit attempt and the accompanying footage was to be the official documentation of a great victory. The early scenes of the film clearly show that Mallory, Irvine and their company were brave men ready to undertake a perilous journey, their spirits are high, and their interactions with the Nepalese people are joyous as they exchange acquaintances and customs. As the men begin the ascent of the great Everest, they are eager, determined, and unaware that tragedy awaits them.

Noel beautifully captures Everest at its purest. All one has to do is search images of various Everest camps today to see how much the landscape has changed. Today, permanent camps have been established and the amount of trash left behind by climbers continues to mount and mar the majesty of the scenery. With these scenes of Mallory and Irvine's team paving rough trails through the rocks and over ice, we see a true Everest. Considering that only the most ideal conditions were photographed, one can only assume the hardships the men endured night after freezing night.

As bad weather set in, Mallory and Irving and their support crew continue to climb. As conditions worsened and a group of men were cut off, a risky rescue operation was undertaken and Noel was there with his camera equipment to capture the moment using telephoto lenses. Because of technological limitations, the camera equipment could only go so high, so there isn't any photographic account of what happened to Mallory and Irving as they attempted their fateful summit. As they disappear over a ridge and never reappeared, the men were counted as lost. A simple marker was erected in their honor stating the two men died attempting to be the first to conquer Everest. It wouldn't be for another 75 years before their remains would be recovered and to this day it is a matter of speculation whether or not the two men reached the peak. 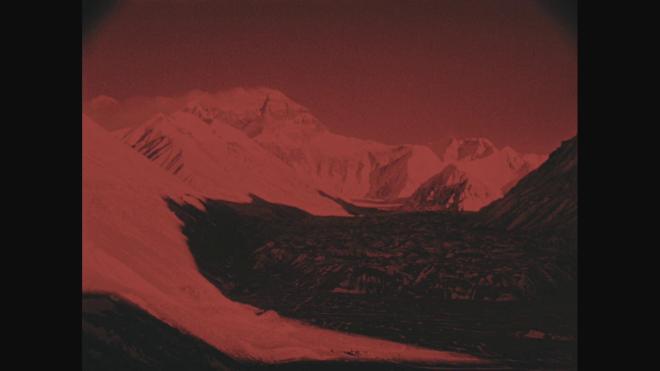 While it may not be known whether or not Mallory and Irving managed to summit Everest, this harrowing account survives. The film is fascinating if a bit morose as it was completed after the two men disappeared and were deemed lost to the mountain. As a historical artifact 'The Epic Of Everest' is an incredible film to experience. The color tinting evokes a somber mood while the incredible scope of the undertaking is beautifully captured. The fact that after 91 years this film has survived is amazing. Kino Lorber has done an incredible job bringing this film to Blu-ray and with a new score by Simon Fisher Turner, 'The Epic Of Everest' remains an important document of human endurance. It's more than a simple movie or travel film, it's an important historical record. I can't recommend this movie highly enough.

'The Epic Of Everest' arrives on Blu-ray thanks to Kino Lorber and is pressed on a Region A locked BD50 disc. The disc is housed in a standard case and opens directly to the main menu.

Age is something people need to keep in mind when viewing 'The Epic Of Everest.' For a film that is closing in on one hundred years old, 'The Epic Of Everest' maintains an incredible 1.33:1 1080p transfer. Given the technology of the time and the conditions under which this film was shot, the condition the film is in is impressive. Detail can shift from shot to shot depending on the camera setup, but is often very impressive. Minimal age-related issues mar this transfer as there are only a few faded surface scratches with slight to mild speckling to be seen. Color tinting was employed for some sequences and they are bright and vivid although they can diminish the black levels and overall sense of depth. The majority of the film is with any color tinting and offers a pleasing if a little light greyscale to enjoy. When one factors into account the conditions this film was shot under as well as the technology employed, it becomes very easy to forgive any fault in the film elements since we're lucky this thing exists at all. As far as a modern transfer goes, this presentation is immaculate and free from any contrast issues, banding, or any other type of compression artifact.

'The Epic Of Everest' is provided with a nice and rich DTS-HD MA 5.1 audio mix. For a silent film, this may feel like a bit of a cheat for some, but when you consider the new music score from Simon Fisher Turner, it makes a little more sense. The music takes a more thematic and dramatic tone offering tonal swells that ebb and flow to give one an auditory sense of the grandeur that was Mallory and Irving's undertaking as well as the scope of the mountain itself. Coupled with the music is actually a rather pleasing sense of atmospheric sound in the form of some slight scene specific sound effects as well as an age-related hiss effect. One would think that sort of anomaly would detract from the experience, but I found that its employment actually helped pull me into what I was seeing. Silent movies in the past have often gotten tough treatment when they were transferred to home video with any piece of public domain music being slapped onto it. In the case of 'The Epic of Everest,' I found this new music as well as the audio subtleties to be welcome editions.

Introducing The Epic Of Everest: (HD 9:02) Captain John Noel's daughter Sandra discusses her father's experience and determination to film the conquering of the mountain. Bryony Dixon, Silent Film Curator at BFI is also featured to provide a historical context for the piece.

Scoring The Epic Of Everest: (HD 8:15) Composer Simon Fisher Turner discusses how he came to be on the project and his approach to composing the new score.

Restoring The Epic Of Everest: (HD 6:19) Bryony Dixon and other members of the BFI restoration team discuss, sadly too briefly, what went into this impressive restoration effort.

Trailer: (HD 1:31) A Recently produced trailer to announce the restoration of the film and showcase the efforts.

'The Epic Of Everest' is the account of an incredible journey that lead to the deaths of George Mallory and Andrew Irvine. As a film that is over 90 years old, it's an amazing viewing experience as you not only get to see these brave explorers but the local peoples they encountered as well. Kino Lorber has done an amazing job pulling this Blu-ray disc together and should be an absolute delight to any viewer. With a fantastic video transfer, an effective newly commissioned score, and some informative extra features, I'm calling this one Highly Recommended.

Sale Price 19.89
List Price 29.95
Buy Now
3rd Party 19.86
In Stock.
See what people are saying about this story or others
See Comments in Forum
Previous Next
Pre-Orders
Tomorrow's latest releases