A young woman (Alice Eve) races to catch the 1:30 train out of New York City to New Haven. Stranded in the city after being robbed and missing her train, she meets street musician Nick Vaughan (Chris Evans) Starting as convenient acquaintances, the two soon grow into each other’s most trusted confidants when a night of unexpected adventure forces them to confront their fears and take control of their lives.

When an actor or actress decides it's time for them to take the gigantic leap from working in front of the camera to behind it, there is an understandable amount of excitement mixed with a bit of trepidation. This process is nothing new, it's gone on since the earliest days of filmmaking. Buster Keaton, Charlie Chaplin, heck even Charles Laughton took a stab at directing with the classic 'The Night of the Hunter.' Some find that being behind the camera suits them, others like Laughton thought the experience was so terrible their one outing as director was to be their last. Clint Eastwood has gone on to see the highs and lows of a long directing career as has Woody Allen. Ben Affleck has proved directing to be the perfect Hollywood comeback format with his recent efforts behind the camera. Now it's Captain America's turn. Chris Evans goes behind the camera and stays in front of it with his opening gambit 'Before We Go.' While a competent turn behind the camera, the material feels very familiar and isn't very challenging.

All around nice guy and talented trumpet player Nick Vaughan (Chris Evans) is standing in Grand Central Station in New York City playing a few choice tunes. He's not there busking for spare dollar bills or change, he's there avoiding a bigger, more responsible appointment. While he is in town to try out for a premier Jazz musician's band, he's actually in town for a more personal reason. Interrupting his inward angst is Brooke Dalton (Alice Eve) who comes running past him trying to catch the last train out of the city to Boston, dropping and breaking her phone in the process. Being the nice guy that he is, Nick returns the destroyed device to the distraught woman.

Since the station is about to close, Nick and Brooke are kicked out into the cold New York Streets. It turns out Brooke had her purse stolen earlier in the night and she doesn't have any cash or credit cards to get a hotel room, or even get a flight out of the city. Nick, on the other hand, has a couple of maxed out credit cards and only a few bucks to his name - but that isn't going to stop him from being the nice guy that he is and helping the damsel in distress. As the two head out all over New York City at night, the pair quickly become friends and start to learn why their personal situations have brought them to the city.

It turns out Nick is supposed to go to a wedding that an ex-girlfriend, who he nearly proposed to, would be attending and Brooke has found out that her husband has been cheating on her. Nick doesn't want to see his ex again and Brooke is desperate to get back to Boston in time to retrieve a scathing letter she wrote her husband just before she left. Together Nick and Brooke become the oddest of couples as they help each other sort through their personal issues and find the courage to face their fears head on. 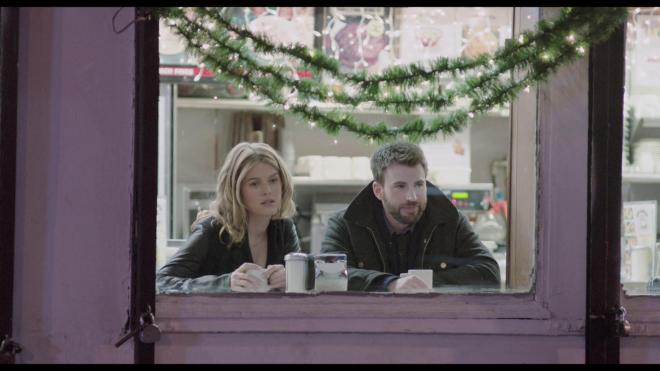 Chris Evans is a charming actor. The guy can play the hero with the star-spangled shield or he can be the deadpan comedy relief any day of the week. As a director, he proves that he may well have some talent behind the camera and shows that he knows how to manage dramatic material between two actors. While the film was shot in New York City, the narrow scale of the story ensures that the city remains a background character to an adventure that focuses on two people dealing with their own personal crises. The performances are overall strong, but the material is entirely too familiar and unchallenging to be worth the time spent watching it.

Perhaps the biggest problem facing 'Before We Go' is the script. Written by Ronald Bass, Jen Smolka, Chris Shafer, and Paul Vicknair; the material on display just doesn't warrant the need for four writers. The characters while somewhat relatable, are rather bland individuals. Do we really want to follow a guy who can't face seeing a woman he hasn't seen in six years, implying he hasn't moved on with his life and done something with himself? Is a woman who is desperately trying to get back to her frequently philandering husband because deep down she still loves him someone we want to see succeed in her goals? Do we want to see both of these people on screen at the same time together helping each other deal with their respective issues? Honestly, I really wasn't moved by either character. The only reason to keep watching at all is to see Chris Evans and Alive Eve act alongside each other.

The next major issue facing 'Before We Go' is that it is a near beat for beat retelling of Richard Linklater's 'Before Sunrise.' Swap out a train and Vienna for Grand Central Station and New York City, and you basically have the same film all over again. There's no real mystery or doubt where or how this film will end up. From the beginning 'Before We Go' pretty much tells you how it is going to end, so the point of the endeavor is to experience the journey of this predetermined voyage. Most of the antics and happenings that Nick and Brooke get themselves into during their one crazy night in the city are fun and entertaining, but then they pick up a payphone and start calling their past selves in a scene so painfully reminiscent of 'Before Sunrise' that it took a lot of effort to not stop the film then and there.

I guess it's worth mentioning that Chris Evans is a talented enough visual storyteller as well as an actor to keep my interested invested enough that I actually did sit through 'Before We Go' and not feel like I wasted 95 minutes of my time. There is some genuine chemistry on display from Evans and Eve and while the material is something we've all seen before, it was a nice and distracting way to burn an hour and a half of time. 'Before We Go' is hardly a remarkable film for a first time outing for Mr. Evans as a director, but it's at least something better than most would expect. My hope is that when Evans is done playing Captain America he'll have the time to find a better story with some fresher material for his next directorial effort.

'Before We Go' arrives on Blu-ray courtesy of Starz/Anchor Bay and is pressed on a Region A locked BD25 disc. Housed in a standard case, the disc opens to a trailer for 'The Last Five Years' before reaching the main menu.

Shot digitally, this Blu-ray release of 'Before We Go' sports a pleasing if not quite remarkable 1.85:1 1080p transfer.

The best moments of the film are when a scene takes place inside and in stable conditions that allow for you to appreciate the fine detail levels, color accuracy, the warm flesh tones, and sense of depth to the image. When things move outside in the darkness of a New York City night, the image loses a lot of those finer details and the colors become notably cooler. Black levels aren't quite as strong during these night sequences as the image loses some of the sense of depth that it enjoyed in well-lit interiors.

Without any digital noise to speak of, it's a fine looking film, just not very remarkable.

Where the presentation points for 'Before We Go' pick up are in its English DTS-HD MA 5.1 audio track.

The film's rich sound mix really comes to life with this track. From the crisp and clean dialogue to the assortment of tunes to the busy streets of New York City, the track offers up a rich fidelity that makes it feel consistent, present, and alive. All of the audio elements have enough space around them so there is never any distortion. Levels are well balanced and the track keeps to the midranges. Imaging is pretty strong, but this is a quiet conversational sort of film so don't expect those surround channels to come rattling off their mounts. With the film's audio design there is a nice sense of channel movement, those sound effects are there, they just don't intrude on the rest of the mix.

All around a solid audio presentation.

A Conversation With Chris Evans: (HD 3:31) In this very brief interview with the actor/director, that is actually mostly taken up by clips from the film rather than conversations, but it's nice to hear his intentions with the work and his experiences behind the camera.

Those looking for something fresh and wonderful from 'Before We Go' may be a bit disappointed by star Chris Evans' first outing as a director. Those looking for a nice, unchallenging, romantic - if familiar - story about two people should be satisfied with this film. Starz/Anchor Bay have done a pretty decent job delivering a solid video transfer with a strong audio track. The lack of any meaningful extra features is a shame. 'Before We Go' is worth a look but a blind buy may be a bit of a stretch.

Sale Price 17.99
List Price 22.99
Buy Now
3rd Party 6.06
In Stock.
See what people are saying about this story or others
See Comments in Forum
Previous Next
Pre-Orders
Tomorrow's latest releases