Following the events from the first film, a different family; a mother and her 2 sons move into a rural house that's marked for death. When the deputy from the first film learns that this family is next in line to fall to the demon Bhughul, he races before time to stop it and save them from the same fate.

In typical sequel fashion, the makers of 'Sinister 2,' a direct follow-up to 2012's surprisingly creepy horror flick, abide by the "more is better" adage in a plot that also tries to provide an origins story for the menacing, mouthless demon Bughuul. What made the first movie a satisfying shocker were the unanswered questions, an ominous mystery that generated a spine-chillingly sinister atmosphere which led to a horrifying conclusion. But here, the filmmakers forego the mystery and atmosphere in favor of jump scares and an unnecessary melodramatic storyline that essentially contradicts the events and purpose of its predecessor. Director Ciarán Foy, who made a name for himself in the psychological thriller 'Citadel' and working from a script by the Scott Derrickson and C. Robert Cargill — the same team from the first movie — imitates many of Derrickson's stylistic choices, from figures appearing and disappearing in dark hallways to photos of the demon moving. However, amid his attempt to echo the success of the first, Foy forgets to make this one remotely scary.

Certainly, the Irish-born filmmaker has his moments in a few eerie scenarios, particularly in the first half, but those hair-raising segments are related to a character that logically should not be affected by the demon's appetites. The character in question is the understatedly goofy Deputy who originally played more comic relief to Ethan Hawke's grave non-fiction writer. Reprising his role from the first movie, James Ransone is now given top billing while also tasked with carrying Hawke's grimly somber investigations behind a series of loosely-related murders. According to previous events, Hawke's character felt terrorized by Bughuul's presence because he was also the father of the family being haunted towards their gruesome demise. It's for this reason — again, as maintained by the movie's own logic — the family moves to a new house where the curse of 8mm-filmed deaths continues. Ransone's Ex-Deputy hasn't a family of his own and is currently working as a private investigator with the unusual hobby of burning down houses connected to Bughuul's reign of terror. 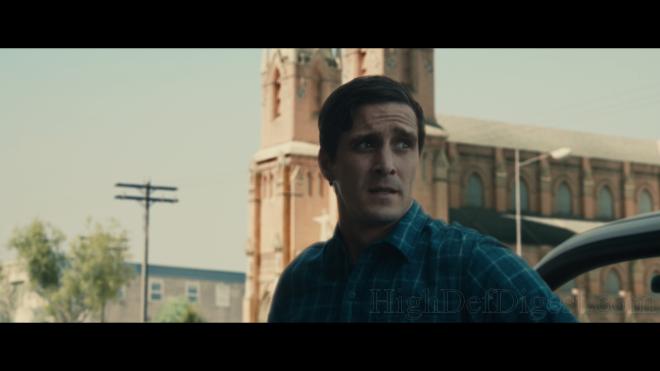 Nevertheless, the filmmakers shrewdly arrange a family conveniently in need of a kind-hearted father figure such as Mr. So & So. (Yes, that really is the character's name.) The family of three is made up of twin brothers, Dylan and Zach (Robert Daniel Sloan and Dartanian Sloan), and their mother Courtney (Shannyn Sossamon). They're meant as the plot's dramatic center by incidentally living in the house So & So planned as his next act of arson, but after learning their sob story — they're running from a real-life, psychologically-damaging monster — Ransone transforms into a knight in shining armor. This inessential subplot distracts — by which I mean further trouncing the already lack of suspense — from the movie's main focus while forcing fans to watch what essentially amounts to a made-for-television melodrama. On its own, the story could be interesting, thanks in particular to Sossamon's excellent performance, but in a supernatural tale meant to scare the bejesus of audiences, their family issues feel tastelessly tacked on and depressing.

One possible saving grace for 'Sinister 2' could be the explanation for Bughuul's penchant for shooting grisly deaths in Super 8 film and 1970s attire. The ham radio is a nice, creepy touch, as well. Notwithstanding, the story is ultimately undermined with several scenes of the twins interacting with other ghost children where the boys are goaded to watch homemade movies, an apparent ruse that unfolds to a twist that's more questionable than satisfying or even the least bit shocking. Adding insult to injury, we're shown how these kill films are made. Whereas in Derrikson's movie, not knowing played to the production's disturbing atmosphere, the sequel reveals the man behind the curtain and ruins the possibility at generating suspense, turning the last quarter of a 97-minute feature into a ridiculous hide-and-seek chase sequence with a splash of poltergeist nonsense. It's as if the filmmakers themselves suddenly grew bored of their own story, throwing on whatever cliché they could think of, hoping something would stick. And sadly, none of it does.

Universal Studios Home Entertainment bring 'Sinister 2' to Blu-ray on a Region A locked, BD50 disc with a code for an UltraViolet Digital Copy. With a lightly-textured slipcover, the disc is housed inside a blue, eco-elite keepcase. At startup, viewers can skip over several trailers before being greeted by an animated main menu with music in the background.

Like its predecessor, 'Sinister 2' debuts with a fantastic, squeaky-clean 1080p/AVC MPEG-4 encode, and as before the 8mm sequences are intentionally poor and badly aged with thick, noticeable grain. Although shot entirely on high-definition cameras, the video doesn't have with the digital, soap-opera appearance that often tends to distract. Much of the photography appears as though lightly soften, a deliberate style possibly through the use of diffusers, to give the movie a more cinematic appeal. Nonetheless, the presentation is highly-detailed, exposing lifelike textures in facial complexions and clothing. Every grain and fine lines along the wooden planks of the church and house are plainly visible throughout.

Presented in a 2.40:1 aspect ratio, the transfer displays deep, rich black levels, which nicely add to the movie's film-like quality while providing the image with appreciable dimensionality. Poorly-lit segments, of which there are many, maintain excellent visibility within the darkest portions. Contrast is lusterless and a bit on the low side, which is an intentional stylistic choice meant to generate an ominous feel, yet the picture remains stable and consistent, keeping everything sharp and well-defined. The color palette is also on the warmer side with emphasis on amber-yellow and earth tones, and still, primaries appear accurate and full-bodied with bold, pulsating reds everywhere, making this an excellent, near-reference follow-up.

In the audio department, Bughuul doesn't quite deliver the scares and frights as he did in the first movie, which is not to say that it's bad, just not as effective or immersive.

As before, much of the story is character driven, so the focus is on the dialogue and interactions of the people, which are well-prioritized and intelligible throughout. Movement across all three front channels is fluid with excellent channel separation, generating a broad and spacious soundstage from which many of the scares are derived. Typical of most modern horror flicks, the sequel relies of many piercingly loud jump-scares, and thankfully, the lossless mix exhibits superbly detailed clarity in the upper ranges and precise, well-balanced mids. Low bass is also reserved for making viewers jump from their seats, delivering palpable weight and a robust responsive that'll have the room shaking during the most frightful moments. Although a few segments come with good atmospheric effects that nicely expand the soundfield, rear activity is generally silent, again leaving the front soundstage to do much of the heavy lifting. And once again, the bizarre, disturbing score is the film's awesome highlight, spreading across the screen like a wall of terrifying sounds and largely responsible for creating much of the story's creepier aspects.

In typical sequel fashion, the makers of 'Sinister 2' abide by the "more is better" adage in a plot that also tries to provide an origins story of sorts. But amid a rather blatant attempt to repeat the success of the first movie, Irish-born filmmaker Ciarán Foy, in his American debut, forgets to make this follow-up remotely scary. The Blu-ray arrives with an excellent audio and video presentation, but the supplements are fairly light for a new feature. Overall, the package is another case of good disc, bad flick and fans of the first movie might want to give it a rent before deciding on a purchase.

Sale Price 9
List Price 34.98
Buy Now
3rd Party 8.97
In Stock.
See what people are saying about this story or others
See Comments in Forum
Previous Next
Pre-Orders
Tomorrow's latest releases