In the wake of a disaster that wipes out most of civilization, two men and a young woman find themselves in an emotionally charged love triangle as the last known survivors.

Set somewhere in the American Northeast near or around the Appalachian Mountains, 'Z for Zachariah' immediately throws audiences into the mix of things long after a nuclear war has pretty much wiped out life across the United States. A resourceful Ann Burden (Margot Robbie) and her Australian koolie are hunting the valley of her family's farmstead without much luck. She appears to be the last surviving human. That is until John Loomis (Chiwetel Ejiofor), wearing a radiation suit and carrying a Geiger counter, stumbles upon her lush, vibrant patch of land — a miracle Garden of Eden-like countryside with plenty of clean groundwater. After accidentally swimming in a contaminated pond, Ann rushes the stranger to her house and nurses him back to health. The story moves along fairly quick in these opening moments with little to no dialogue, leaving viewers to postulate much of what's going on. And while Ejiofor spends a small portion of screen time sweating and suffering nightmares in bed, Robbie is tasked with carrying the film, which she does admirably, showing how the 16 or 17-year-old girl managed to survive alone.

Once Ejiofor's mysterious stranger is on his feet again — albeit with the assistance of a cane at first — the story begins to swell with the disease of suspicion, contaminating every conversation with subtle notions of mistrust and doubt. It largely stems from Ejiofor's Loomis, an engineer by trade with a sketchy backstory that never explains how he came to own a radiation suit and a small wagon full of medical supplies. Robbie's somewhat naïve Ann is much too trusting. Given the circumstances, she feels as though there's little choice who she can trust. But from time to time, the girl looks at him with a doe-eyed expression that seems to either hide her misgivings and regretting her earlier decision. However, the more time spent with Mr. Loomis, the more we see a man with an infectious sense of hope, an ambition for the future and the possibilities of rebuilding on Ann's valley. He teaches her how to pump gas manually, fixes the tractor to start planting in preparation for the upcoming winter and wants to build a waterwheel for generating electricity. Soon, Loomis proves himself an ideal partner for Ann's idyllic life. 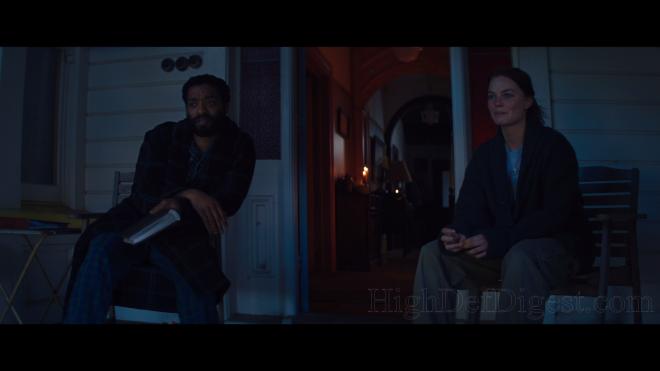 And even this growing sense of hope in Ann develops into an uncomfortable, if not problematic, obstacle. More for Loomis — and perhaps the audience, as well — than Ann, which makes for a fascinating turn in the plot. Ann, in all her innocence and adolescent wisdom, only sees that hope stemming from the idea of repopulating the Earth whereas Loomis is noticeably troubled by their age difference. Working from a script by newcomer Nissar Modi, director Craig Zobel expertly builds the uneasiness between his two characters in the silence. Ann says something or inches closer to Loomis during a candlelit dinner to imply her intentions while Ejiofor responds with a disquieted glance. Matters are complicated when a more youthful and handsome second stranger named Caleb (Chris Pine) also stumbles upon their rustic paradise. The young man's presence becomes the standard love-triangle device in many ways, a particularly familiar one from contemporary YA adaptations. However, Zobel uses it effectively to raise the stakes for Loomis and builds the tension among the three to an intense boiling point.

Based on the 1974 sci-fi novel by Robert C. O'Brien, the famed author of Mrs. Frisby and the Rats of NIMH often credited for shifting the young adult genre to more mature themes, Zobel tackles a rather complicated subject matter in 'Z for Zachariah.' Something that even the best YA adaptations would make light matter of or ignore completely. In such a serene, utopic valley, the hope of rebuilding humanity seems reliant on the battle between modern conveniences and a pragmatic approach versus falling prey to our baser instinct and innate desires. Zobel goes so far as broach the topic of science versus religion, subtly hinting at faith being a hindrance to progress. To create this thoughtful atmosphere, Zobel and cinematographer Tim Orr ('Seeking a Friend for the End of the World') drew inspiration from Andrei Tarkovsky, like 'Solaris,' 'The Mirror' and most noticeably, 'Stalker.' The filmmakers also took notes from Geoff Murphy's 'Quiet Earth' and the 1959 classic 'The World, the Flesh and the Devil' to expand on the plot's suspense. The end result is a surprisingly sober and remarkably pensive character study.

Lionsgate Home Entertainment brings 'Z for Zachariah' to Blu-ray on a Region A locked, BD50 disc housed inside a blue, eco-cutout case with a glossy slipcover, a postcard and a code for an UltraViolet Digital Copy. At startup, the disc commences with a series of skippable trailers before switching to the standard menu screen with full-motion clips and music.

The apocalyptic drama makes a home on Blu-ray with a generally satisfying AVC-encoded transfer, but the digital photography exposes a couple faults and cracks in the foundation.

Shot on the Arri Alexa camera system, the video arrives with average contrast and brightness levels. Whites are somewhat drab and plain while blacks are mostly dull and noticeably murky, especially during low-lit interiors and nighttime sequences. This makes for a fairly flat, two-dimensional 2.40:1 image, but the look is very much in line with the filmmaker's intentions. The palette also appears slightly skewed, as a majority of the colors seem muted and humdrum. On the whole, the presentation isn't particularly dynamic, which is ironic for a plot about a lush, vibrant valley full of life, but thankfully, primaries remain accurate and cleanly rendered.

On the other hand, fine lines and objects are highly detailed in nearly every scene. Setting aside some of Tim Orr's stylized cinematography, every nook and cranny of Ann's house is plainly visible and sharp, from the little figurines and bottles along the kitchen countertop to the aged, cracked wood of the walls and floor. Leaves are distinctly, and facial complexions are revealing with natural-looking skin tones. It's not as pleasing as other contemporary movies, but the overall picture is satisfying and looks great on Blu-ray.

The YA adaptation arrives with a slighter better and pleasing DTS-HD Master Audio soundtrack that generates a very subtle soundfield. Despite it being an apocalyptic story with little life surrounding the characters, the surrounds are quite active and effectively used on various occasions. The leaves of trees rustle in the wind, echoes reverberate all around and Ann's house creaks with extraordinary clarity as characters fail to creep quietly. Scenes of silence and uncomfortable stillness are all the more apparent for a deliberately understated soundscape.

The majority of the design keeps viewers engaged in the front soundstage where much of the action occurs and conversations are very well-prioritized. Imaging is expansive and broad, exhibiting excellent fidelity and channel separation. The mid-range is detailed, providing Heather McIntosh's subtle score with appreciable warmth and distinction in the orchestration, which nicely bleeds into the side speakers as well as the top front heights when the receiver's DSU function is applied. Low bass is somewhat restrained, but that also appears intentional because when used, it's appreciably punchy and accurate, providing the lossless mix with a fantastic sense of space and presence.

Based on the 1974 sci-fi novel by Robert C. O'Brien, 'Z for Zachariah' is a thoughtful and pensive character study pitting faith and science in a Garden of Eden-like valley. Craig Zobel directs a trio of excellent performances in Margot Robbie, Chiwetel Ejiofor and Chris Pine, a love triangle that creates the perfect conditions for questions about rebuilding humanity after an apocalyptic nuclear war. The Blu-ray arrives with stylized but excellent video and an equally terrific audio presentation. Supplements are disappointingly light, but the overall package is recommended.

Sale Price 13.99
List Price 24.99
Buy Now
3rd Party 3.49
In Stock.
See what people are saying about this story or others
See Comments in Forum
Previous Next
Pre-Orders
Tomorrow's latest releases