The Hobbit: The Battle of the Five Armies - 3D Extended Edition

“The Hobbit: The Battle of the Five Armies” brings to an epic conclusion the adventure of Bilbo Baggins (Martin Freeman), Thorin Oakenshield (Richard Armitage) and the Company of Dwarves. The Dwarves of Erebor have reclaimed the vast wealth of their homeland, but now must face the consequences of having unleashed the terrifying Dragon, Smaug, upon the defenseless men, women and children of Lake-town.

As he succumbs to dragon-sickness, the King Under the Mountain, Thorin Oakenshield, sacrifices friendship and honor in search for the legendary Arkenstone. Unable to help Thorin see reason, Bilbo is driven to make a desperate and dangerous choice, not knowing that even greater perils lie ahead. An ancient enemy has returned to Middle-earth. Sauron, the Dark Lord, has sent forth legions of Orcs in a stealth attack upon the Lonely Mountain.

As darkness converges on their escalating conflict, the races of Dwarves, Elves and Men must decide – unite or be destroyed. Bilbo finds himself fighting for his life and the lives of his friends as five great armies go to war. 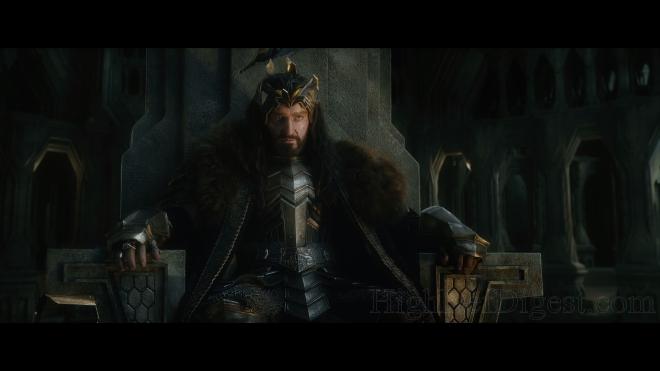 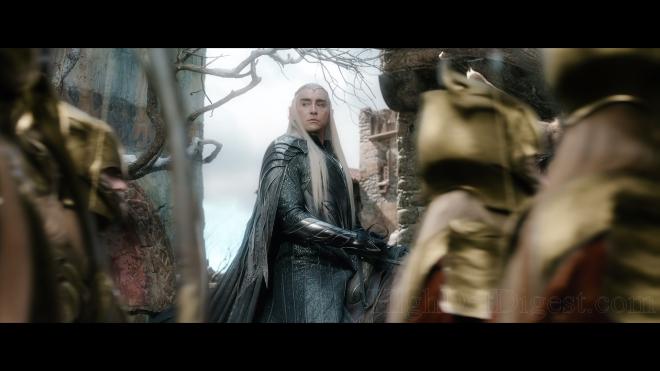 In the film's extended form, the additional 20 minutes neither improve nor ruin an already strong and fairly satisfying finish to the trilogy. However, the extended scenes — some so minor as to be barely noticeable while others quite apparent — are just enough to arguably make this version slightly more entertaining than it's theatrical counterpart. Several new scenes are negligible, easy-to-miss bits of dialogue that create a better flow and pace. There's also a bit more action during Gandalf's rescue at Dol Guldur. The most significant differences, and the ones more likely to attract fans, are the longer battle sequences, especially a terrifically entertaining exchange and initial conflict between Dáin's and Thranduil's armies just before the Wereworms show up. In Dale, Gandalf has a brief encounter with a large troll where we also witness Alfrid's appropriate comeuppance while the dwarves drive a war machine pulled by goats towards Ravenhill and Azog. Perhaps, the best and most welcomed addition is a longer, more emotional funeral procession for our three fallen protagonists and Dáin's inauguration.

Warner Home Video brings 'The Hobbit: The Battle of the Five Armies Extended Edition' to 3D Blu-ray as a five-disc package with an UltraViolet Digital Copy code. Housed inside a black, eco-elite keepcase with a middle panel that holds two discs on either side, all five discs are Region Free, BD50s with the 3D presentation spread across the first two discs. The whole thing comes with a sturdy, attractive slipcover lightly textured to simulate leather and a lenticular image in the center Bilbo and Gandalf. This extended edition of the film adds 20 minutes of dialogue and extended battle sequences to the theatrical runtime of 144 minutes, bringing this version to 164 minutes total, which also makes it the shortest of the three films. Viewers are taken straight to an animated main menu screen with music and full-motion clips.

Not surprising, the extended edition arrives with a video presentation not all that different from its predecessors. In fact, my initial impression remains the same, as the final installment in the fantasy-adventure trilogy erupts on the screen with a superb, demo-quality 1080p/MVC MPEG-4 encode that opens with a blaze of fire and 3D mayhem. As Smaug ignites Laketown with his fiery breadth, the camera maneuvers between buildings, making them bulge and stick out while the steadier moments looking down rows of wooden structures creates an impressive elongated illusion where the farthest objects penetrate deep into the background. Meanwhile, weapons and arrows pierce through the screen with excellent pop-out effect during the battle for Erebor. Separation between characters and other objects is outstanding, creating an amazing sense of space and vastness, and faces come with a believable roundness to them, particularly close-ups of Smaug's long snout.

In the 2D realm, the all-digital photography of Andrew Lesnie astonishes with razor-sharp clarity and definition, exposing the tiniest flaw and imperfection in the clothing, armor, buildings and various weapons seen throughout. Individual hairs are distinct, and the textures of the fabric in the costumes are very well-defined and lifelike. Facial complexions are highly revealing as well, showing every wrinkle and pore in the faces of the cast.

Like the video, the epic battle rages with the same reference-quality DTS-HD Master Audio soundtrack heard in the previous theatrical edition. The design offers distinct clarity and superb definition in the mid-range, generating a brilliantly wide and engaging soundstage. The tiniest pop and sizzle of crackling fire burning the wooden structures is distinctly heard while the clanging, clashing sounds of metal on metal is extraordinarily detailed, echoing throughout the room. The upper ranges during battle scenes never falter and are precise without a hint of distortion, allowing for every scream and wail to be heard above the chaos while dialogue remains intelligible.

Along with the excellent dynamic range, bass plays an appreciable role in Howard Shore's thrilling musical score, adding a great deal of depth and weight to the orchestration. The low-end is powerful and robust enough, making the battle sequences rumble with palpable excitement, but sadly, it's not as effective as the last films, almost a bit disappointing, as it never really digs deep into the ulta-low depths (bass chart). As with the previous two releases, the rears deliver a variety of subtle ambient effects with the scenes of war and mayhem providing an awesomely satisfying environment. Battle cries and howls effectively surround the listener while arrows fly overhead to the back and swords swing from one side to the other with fluid panning, creating a stunningly immersive 360° soundfield. Though it's not as consistent as its predecessors, the final chapter in the trilogy comes with a marvelous and highly-enjoyable lossless mix.

The final chapter in the massive and needlessly overlong adaptation of J.R.R. Tolkien's prequel to the battle for Middle-earth saga, 'The Hobbit: The Battle of the Five Armies,' arrives more with a whimper than as the exciting conclusion to the grandiose adventure it originally set out to be. Featuring the same cast from the last entry, the conclusion isn't a waste, but it's also not the electrifying finish promised by the previous two movies. The "Extended Edition" arrives with the same stunning video and a reference-quality audio presentation, and it includes a treasure trove of special features sure to please and satisfy the loyal fans who waited for this release and finally see the end of a fifteen-year journey.

Sale Price 59.98
Buy Now
3rd Party 94.95
In Stock.
See what people are saying about this story or others
See Comments in Forum
Previous Next
Pre-Orders
Tomorrow's latest releases