"I don't know Amanda, I mean, this sounds like a really bad idea."

When you read the titles of movies like 'Alien VS Predator' or 'Cowboys & Aliens' or 'Freddy VS Jason' you get a pretty good idea what the movie is going to be about before you even sit down to watch the flick. Because you can pretty easily pre-judge a movie by a title, there comes a certain set of expectations the movie needs to meet. When you read a title like 'Navy Seals VS Zombies' you have a pretty good idea that the flick will feature burly macho men with big guns shooting bloody ghoulish members of the living dead; and you wouldn't be wrong. However, if you were looking for a movie with a goofy sense of humor that revels in its premise, you may be disappointed with this one.

When the Vice President of the United States Mr. Bentley (Rick Fox) codenamed "Elvis" is on a campaign stump in Baton Rouge, a routine press conference goes all to hell. What should have been a quick and easy Q&A sessions with young reporters like Amanda (Stephanie Honoré) turns into a savage bloody attack as random civilians begin killing and disemboweling each other! With the Vice President's Secret Service detail overrun, the only thing left to do is lock the doors and hold tight for the rescue team. The rescue team in this case just so happens to be one of the best Navy Seals teams ever trained.

Headed by Commander Sheer (Michael Dudikoff) with his Lieutenant named Pete (Ed Quinn), the team assembles for what they think is supposed to be a simple snatch and grab operation. Little do these men know they'll be parachuting into hell itself. Once the Seals secure the Vice President, the reporter Amanda, and the rest of the Secrete Service detail - they're immediately set upon by bloody, decaying zombies!

Only C.I.A. agent Stacy (Molly Hagan) has any idea what is going on. It would appear that the city is the victim of a biological attack. Only the team of scientists at a nearby classified facility has the means of figuring out a possible vaccine to the infection. After already risking their lives to save the Vice President, the Navy Seals will have to fight their way through an entire city of the walking… or rather the running dead in order to save the team of scientists. 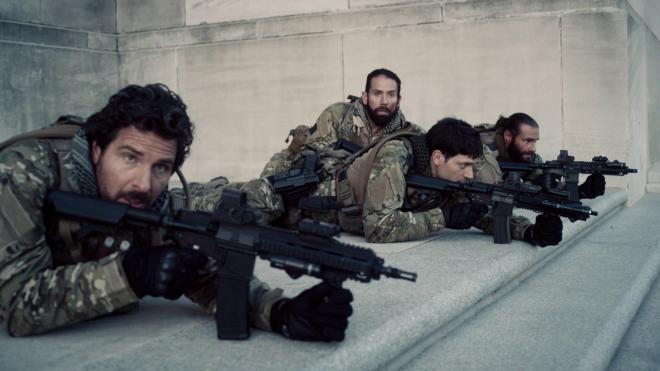 Going into a movie titled 'Navy Seals VS Zombies' I was expecting some over-the-top gore, plenty of blood and guts, some macho guys talking tough, and plenty of off-color humor. Directed by Stanton Barrett from a screenplay by Matthew Carpenter, there are some blood and guts moments and there are some tough guys killing zombies, but that's about it. I wasn't expecting a movie with a premise like this one to be played as completely straight as it is. In fact, there is very little humor to be found in this flick at all.

Given that 'Navy Seals VS Zombies' decides to play things straight, the results are actually pretty good. The story is there, the performances may be a bit amateurish, but they work, and there are a couple of decently gory moments. What kills 'Navy Seals VS Zombies' is the film's meager budget. Considering the film attempts to appear authentic, it would seem that most of the budget was spent on military equipment, helicopters, a fighter jet fly-by, and Michael Dudikoff. Only they seemed to have paid Dudikoff's base rate to get him to wear a headset and bark out orders in a voice that sounds like he's been smoking cigars for three days straight. When you have the 'American Ninja' in a movie, it's a shame he's wasted as he is here, the guy should be out there with the big boys kicking zombie butt.

Where the budget constraints really show are with the titular zombies in the film - or rather the lack of zombies. Most of the blood and gore and makeup effects are saved for a few star zombies and some closeup gory glory shots. Most of the on-screen zombies and there may all be but a dozen of them, just have some red fake blood squirted all over their faces and clothing. For most of the "battle" sequences, it just features the actors with their guns pointing into an obscure direction with the sounds of explosions or growling zombies pushed to the rear audio channels. Only a couple shots feature anything that actually looks like real blanks or squibs. The rest of the time it looks like digital muzzle flash effects pasted over the barrels of airsoft rifles. Added to those woes are the film's frequent lighting continuity issues. From shot to shot to shot, the film can appear normal, then have a blue push, then a green push, and then cycle around again. It's distracting and just makes the movie look cheap in the end.

At the end of the day, I will admit to saying that I did sort of enjoy 'Navy Seals VS Zombies.' The script is pretty tight and it does set up characters well enough so that we feel something for them. The film also takes the time to setup the rules of the zombies, how they come back to life, and perhaps, how the virus they carry can be cured. For a zombie movie, 'Navy Seals VS Zombies' does more than most low budget films would but at the same time it doesn't go far enough in the areas that count most for this Horror sub-genre. If you're itching for a zombie flick you haven't seen yet, there are probably better titles out there, but if you find yourself in front of 'Navy Seals VS Zombies,' you should have an okay time.

'Navy Seals VS Zombies' arrives on Blu-ray thanks to Anchor Bay. Pressed on a Region A locked BD25 disc, the disc is housed in a standard eco-friendly case and opens directly to the film's main menu.

'Navy Seals VS Zombies' offers a mixed bag when it comes to the film's 1.78:1 1080p presentation. Part of the issue that shows through clear as day are a result of the digital photography. It looks like three different cameras were used interchangeably and as a result, the film can look vastly different from shot to shot within a scene. For the scenes leading up to the zombie outbreak, colors look fairly stable and accurate leading to some healthy flesh tones and strong detail levels. Once the SEALS team is on their mission, the image quality shifts all over the place. During action scenes, fine detail is frequently lost and the image dips into some tough motion blur. On top of that, you have the previously mentioned color continuity issues. Black levels overall are pretty strong and there is a nice sense of depth to the image. This is a movie that wears its budget constraints on its sleeves and this transfer puts all of its best and worst assets on display.

'Navy Seals VS Zombies' is given a fairly decent and effective Dolby TrueHD 5.1 audio track. Dialogue keeps to the center channels leaving the sides and rears open for background ambients and sound effects. To that end, the imaging on this track is actually very strong. As I mentioned before, most of the zombies in the film are heard and not seen, so the sounds of moans, groans and squishy blood effects dance around the surround channels nicely. Aside from some persistent dissonant tones, there isn't much of a score to compete with leaving plenty of room for the dialogue and sound effects. With levels well balanced, you shouldn't have any need to monitor volume levels as there aren't any sudden spikes or drop offs. Overall this is a pretty great audio track that serves the needs of the film.

No extra supplemental material is present.

'Navy Seals VS Zombies' is one of those movies that I went into with a certain set of expectations and ended up getting something completely different. It may be one of the better recent low budget zombie movies of late, but that doesn't make up for some obvious budgetary shortfalls considering the ambition of the story. Anchor Bay brings the film to Blu-ray with a bare bones release and void of any extra features. Taken on that note, all I can say is that it is worth a rental. A blind buy may be a bit of a tall order.

Sale Price 18.49
List Price 22.99
Buy Now
3rd Party 3.93
In Stock.
See what people are saying about this story or others
See Comments in Forum
Previous Next
Pre-Orders
Tomorrow's latest releases