The Criterion Collection is releasing Akira Kurosawa's samurai classic 'Throne of Blood' as a single-disc Blu-ray edition, as oppose to last year's dual-format release. Minus the DVD, the new package, which is available August 25th, is identical to its predecessor, so with that in mind, we are updating our previous review with a new Amazon link for purchasing this remarkable masterpiece.

Substituting medieval Scotland for feudal Japan, Akira Kurosawa's 'Throne of Blood' is one of the most remarkable film adaptations of William Shakespeare's Macbeth, as well as one of the most stunning and inspiring motion pictures. Part of its greatness comes from the way it wonderfully epitomizes the genius in the legendary playwright's work while exploring the universal themes that touch on various human attributes we all share. In this classic samurai film, that same blinding sense of self-adulation, arrogance, and ambition that would drive a loyal soldier to rationalize murder and power is a fault and eventual downfall of even the most honorable of men. In all of Kurosawa's films, this is the director at his darkest and most challenging, a masterfully engrossing piece of film art.

But rather than simply appraising the production as a reworking of one of the world's greatest plays, Kurosawa makes the story, which he co-wrote with frequent collaborator Shinobu Hashimoto, uniquely his own. Enigmatic, intricate, and subtly chilling, the first half of the film is a surreal, dreamlike ride through questions of predestination and free will — what is choice when foreknowledge provides answers, and how much of our fate is of our own design. Shakespeare posed a similar thought in his Julius Caesar several years earlier when Cassius says to Brutus that destiny is not to blame as much as ourselves, and there's little doubt the Bard of Avon didn't believe this. Despite the many alterations to the original play, Kurosawa remains faithful to this aspect and marvelously brings it to the forefront as a significant driving force in the actions of characters. 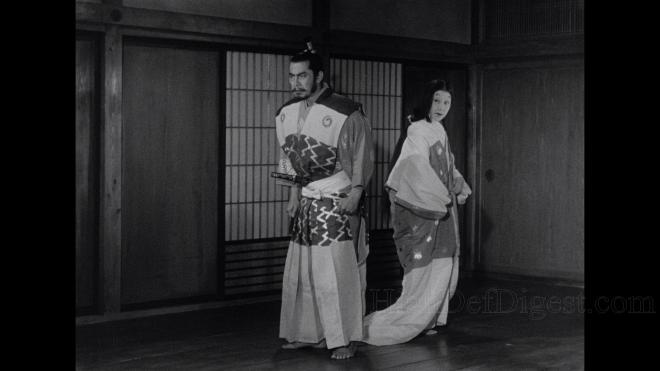 Amplifying the tale's horror elements, Kurosawa's camerawork is astonishing as it makes the best use of Yoshirô Muraki's magnificently simple yet multifaceted production design. The Spirit (a splendidly creepy Chieko Naniwa) of Spider's Web Forest, a superb name for a collection of trees supposedly protecting the lord's castle and perfectly encompassing the theme of fate, is a disturbingly eerie figure with a deep, throaty voice that echoes with a spine-tingling shrill. Never making eye contact, the creature trumpets the fortunes of Washizu (Toshirô Mifune) and Miki (Minoru Chiaki) with haunting assurance. Working closely with cinematographer Asakazu Nakai, Kurosawa establishes in this scene an ethereal, oneiric atmosphere which haunts everything that follows like an otherworldly presence overseeing the decisions of all involved.

Technical qualities aside, the performances are as equally noteworthy as everything else, particularly that of Mifune and Isuzu Yamada as Lady Asaji. With ceaselessly fuming and furrowed brow, Mifune gives a fervent portrayal of a man in a constant state of upheaval and insecurity, one who's self-confidence and certainty is nearly equivalent to his continual surprise of events and sudden bursts of self-doubt. His final moments, from his bouts with insanity to his iconic death, are poignantly memorable reminders that the rise to power is nothing to how swiftly one falls from their throne. Like a little voice sitting on the right shoulder spewing devious words of temptation, Yamada also provides a breathtaking performance that famously complements Mifune. Like a sly spider meticulously weaving her web, her Asaji is a tragic but ghostlike femme fatale whose rustling gown is a chilling noise in the middle of the night. 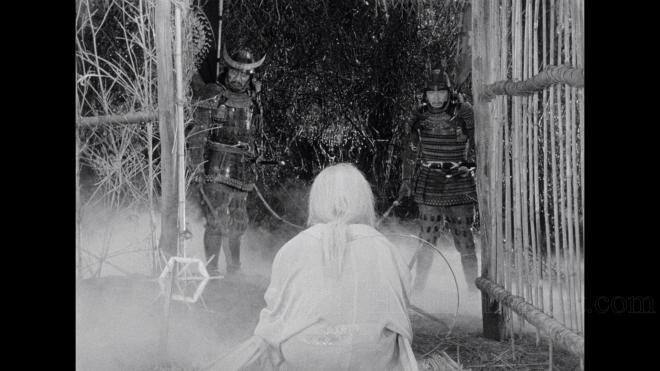 Absolutely gorgeous and riveting, Akira Kurosawa's 'Throne of Blood' is a brilliant masterpiece that's as perfect a motion picture as could ever be conceived. Visually stunning and enthralling, especially the first half, the film is all the more impressive as a reimaging of Shakespeare's Macbeth, one which stands as possibly the best adaptation of the play, if not the best of any of Shakespeare's other works. Although the location and setting of the original play is as different as they come, Kurosawa remains faithful to the story's core theme of fate versus free-will, of predestination versus self-fulfilling prophecies. The end result is a gripping and absorbing film that thrills and haunts its audience.

This Blu-ray edition of Akira Kurosawa's 'Throne of Blood' comes by way of The Criterion Collection (spine #190). The Region A locked, BD50 disc is housed inside the distributor's standard clear keepcase with a DVD-9 copy sitting comfortably underneath. Also included is a 24-page booklet featuring an insightful essay entitled "Shakespeare Transposed" by author and film professor Stephen Prince. Joining the essay are two more articles noting the history and challenges of subtitling the film by authors Linda Hoaglund and Donald Richie. There are no trailers before being greeted by the standard menu screen with static photo.

According to the accompanying booklet, this new high-def transfer of Kurosawa's 'Throne of Blood' was made from a 2K resolution scan of a 35mm fine-grain master positive. Presented in its original 1.37:1 aspect ratio, the results are astonishing to say the least, as the video shows every minute detail with remarkable clarity. The intricate design of the costumes is distinct, exposing individual threads, stitching and wrinkle. Facial complexions are highly revealing and lifelike, especially in close-up, and viewers can make out every fine line in the wooden buildings. The picture is also awash with a thin layer of grain, giving the presentation a lovely cinematic feel. Contrast is comfortably bright and wonderfully well-balanced while black levels are inky rich with deep, penetrating shadows, making this 1080p/AVC MPEG-4 encode a beautiful sight to behold.

The classic Japanese film also arrives with an uncompressed PCM monaural soundtrack that was made from a 24-bit remaster of an optical print track. The soundstage displays a surprisingly broad and extensive imaging with a sharply-detailed mid-range. The highs are beautifully discrete, allowing for every whoosh of the arrow, every crackling laugh of the forest spirit and every clang of the instruments in the score to be plainly heard. The lossless mix does splendidly in delivering the original design as it was meant to be heard. One can even hear the distinct noise in the fabric of Asaji's gown rubbing against itself as she walks. Most surprising is a robust, terrifically responsive bass, which adds to the action and music. Amid all this, vocals remain crystalline and well-prioritized.

Absolutely gorgeous and riveting, Akira Kurosawa's 'Throne of Blood' is a brilliant masterpiece that's as perfect a motion picture as could ever be conceived. Visually stunning and enthralling, especially the first half, the film is all the more impressive as a reimagining of Shakespeare's Macbeth, joined by marvelous performances, magnificent cinematography, and fascinating production design. The Blu-ray from The Criterion Collection arrives with an excellent audio and video presentation. Although supplements are on the light side, the overall package is well worth owning and deserving of a place in any cinephile's library of cinema classics.

Sale Price 20.6
List Price 39.95
Buy Now
3rd Party 20.6
In Stock.
See what people are saying about this story or others
See Comments in Forum
Previous Next
Pre-Orders
Tomorrow's latest releases