Devil in a Blue Dress

An Afro-American man is hired to find a woman and gets mixed up in a murderous political scandal.

"It was easy money, too easy."

Bringing back an old tried and true genre can be a great way to reinvigorate a sagging marketplace. At a time when murder mysteries and thrillers desperately needed something old to make it feel new again, it took 1995's 'Devil in a Blue Dress' to shake things up. An adaptation of Walter Mosley's novel directed by Carl Franklin. 'Devil in a Blue Dress' brings back the classic film noir detective formula and works to turn a fairly run of the mill mystery/thriller into something that feels fresh and exciting without pandering to audience expectations.

Ezekiel Rawlins (Denzel Washington), better known as "Easy" to his friends is in a tough jam. After returning from World War II a hero, he quickly found work at an airplane factory outside of L.A. As a black man from Texas, that was no small feat, but for Easy, it came naturally - until he got fired. Now Easy is practically flat broke with a mortgage to pay and few prospects. While looking for work in the want ads, Easy is approached by a heavy of a man by the name of DeWitt Albright (Tom Sizemore) who says he has a job for him. Is Albright a cop? A private detective? A shady mob boss? It doesn't matter when Easy hears the upfront paycheck involved.

All Easy has to do to earn his easy money is find Daphne Monet (Jennifer Beals), the main squeeze of a rising Los Angeles mayoral candidate Todd Carter (Terry Kinney). It turns out the woman in question has a liking for some soul music and often hangs out at off the books black-owned nightclubs. So that's where Easy starts his search, but as Easy gets closer and closer to finding Daphne, the body count starts to pile up. With lead police detective Miller (Beau Starr), current L.A. mayor Matthew Terell (Maury Chaykin) as well as Albright all searching for the girl, Easy becomes a simple mark for murders he didn't commit. In order to clear himself, find the girl, and score his payday, Easy is going to need some help from his friend Mouse (Don Cheadle), a loose-cannon who shoots first and forgets to ask the important questions altogether. 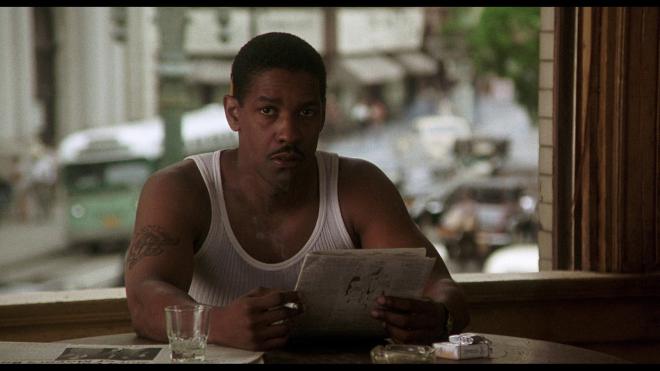 For the life of me I can't figure why 'Devil in a Blue Dress' flopped at the box office right when Denzel Washington was coming off the highs of starring in features like 'Philadelphia,' 'The Pelican Brief,' and 'Crimson Tide.' Granted, 'Virtuosity' was a bit of a bust but that wasn't his fault. After sexual thrillers like 'Basic Instinct' and the clones it spawned had dominated movie theaters, 'Devil in a Blue Dress' should have shaken things up and grounded the detective genre again. Sadly that didn't come to pass and the film was pushed aside to video stores. Today, it stands as an earnest and entertaining attempt at revitalizing the Film Noir genre by giving it a unique angle and hook to make the film work.

Part of what I love about 'Devil in a Blue Dress' is how competently it recreates the late 1940s, early 1950s style atmosphere. Some movies that try to capture that magic can get stuck by trying to fill scenes with authentic-sounding lingo and dialogue that only works to expose how shallow that particular film may be. Writer and director Carl Franklin doesn't bother with the lingo, his film's focus is on telling a compelling story with a conflicted and relatable lead character. The lingo of the day is there, sure, but it's not in the forefront and it doesn't try to define the film.

I also appreciate this film's look at race relations just before the civil rights era gripped the nation. I appreciate how 'Devil in a Blue Dress' looks at the material by not shoving it right in your face, but doesn't let the themes slip away either. So much of the plot and where and how characters end up where they're at is because of their race, or mixed race in some cases, but at the same time these character aspects aren't the main thrust. By bringing the issues up with a deft and subtle finger, Carl Franklin was able to create a film that has a lot to say about an important subject without sacrificing the film's plot.

While Denzel Washington is the main feature of the film and delivers a heck of a performance, the real stand out here is Don Cheadle as the quick on the draw Mouse. While Cheadle was far from being a newcomer, it's easy to say that his portrayal of Mouse was his breakout moment. From the first scene that Mouse enters to the very last, Cheadle steals the show from the film's main stars to great effect. Tom Sizemore's Albright is also a performance of note as the once great actor gives the character enough menace and weight just with a simple sideways glance or how he shifts his weight on his feet to feel dangerous. Sure the guy packs a heater and is threatening with a simple bread knife, but he doesn't need those implements to be dangerous. Jennifer Beals makes a fine Daphne Monet, but she lacks the presence and magnetism of her 'Flash Dance' days. She's essentially the film's McGuffin, but she's given very little to do here by playing a smaller secondary character against a larger canvas of characters.

At the end of the day, I hope that audiences rediscover 'Devil in a Blue Dress' and give it its due day in the sun. The film is a solid Film Noir-styled thriller with a fantastic cast playing rich and colorful characters. It's a movie that has a message but doesn't forget that it's also there to entertain an audience. If you missed this one in the theaters or passed on it during its days on VHS, it's time you give this one a look. I'm willing to be you'll be glad you gave this Blu-ray a spin.

'Devil In A Blue Dress' arrives on Blu-ray thanks to Twilight Time pressed on a BD50 disc and limited to a run of 3,000 units. Housed in a standard clear case, the disc comes with a booklet featuring a strong and interesting essay from Julie Kirgo. The disc opens directly to a static main menu with traditional navigation options.

Since 'Devil in a Blue Dress' wasn't much of a big hit during its initial theatrical release and all previous home video releases have been rather ho-hum, I wasn't expecting much from the film's 1.85:1 1080p transfer. To say the least, I am very impressed. One of the things that I always loved about this movie was the film's intricate and period accurate production design and I'm pleased to say that everything that went into making this movie look the way that it does comes through in fine form with this splendid transfer. Film grain has been retained so every facial feature, every ruffle of Daphne's blue dress, and the Los Angeles scenery can fully be appreciated. Cinematographer Tak Fujimoto's color pallet for this film was always rather dim and hazy, but that doesn't seem to have had much of an effect on primaries as reds, blues, and greens get plenty of pop while yellow sunlight is allowed to fill some scenes with a nice golden tone. Flesh tones look accurate and healthy as well. Black levels are rock solid offering plenty of three-dimensional depth with only a slight instance of crush at the end worth speaking of. All around this is a beautiful transfer.

'Devil in a Blue Dress' also gets the full Blu treatment with two strong audio tracks, a DTS-HD MA 5.1 and 2.0 stereo mix. Of the two, I prefer the 5.1 over the 2.0 but that's only for the richness of the surround effects and how well the track handles the diegetic dialogue against Easy's narration beats. The 2.0 mix tends to flatten these elements together so it can sound a bit cluttered, not in a terrible way, but the 5.1 mix just sounds more organic. To that effect, the dialogue, narration, sound effects and the film's fantastic noir-style score by legendary composer Elmer Bernstein have plenty of space and atmosphere to them. There is plenty of channel movement to be enjoyed as the surrounds are consistently engaged. Without any cracks, hiss, or pops, both the 2.0 and 5.1 mixes sound fantastic, I just prefer one over the other, but fans of the film should be happy with either option.

Audio Commentary: Director and Writer Carl Franklin does a solid job providing an abundance of information about the film from choosing the painting used as the background for the opening credits to shooting the film's climax. There are a couple quiet moments here and there, but he does a great job keeping the track lively and informative.

Don Cheadle Screen Test: (SD 14:51) It's pretty easy to see how Cheadle got the role, from this simple camcorder video of a casting session, he was really bringing a lot of presence to the role.

Original Trailer: (HD 2:30) Might have hit on how this movie didn't capture an audience with this rather terrible trailer, it doesn't exactly sell the movie well, the Optimus Prime narration and the 'Jennifer 8' score by Christopher Young doesn't exactly work to present the film as a classic-style film noir detective film. It looks like a weird period action movie instead.

It had been a long time since I'd last seen 'Devil in a Blue Dress' and I'm glad to see  this film is just as entertaining as it was the first time I saw it. Sure I was ahead of the game this time around, but it was great to see how well plotted this film is and discover its intricate story beats and captivating characters all over again. Twilight Time has done a great job bringing this film to Blu-ray featuring a fantastic A/V presentation with a couple of decent extra features. Plus there's an Elmer Bernstein isolated score track so how can you possibly go wrong with this Blu-ray? Easily recommended.