How I Met Your Mother: Season Four

The primetime void left by the departure of 'Friends' opened the door for countless imitators and wannabes. Just as every superstar NBA player is compared to Jordan, or NHL star to Gretzky, so too is seemingly every new sitcom compared to 'Friends.'

Enter: 'How I Met Your Mother.' The program, which debuted on CBS in 2005, has drawn rave reviews and quite a few award nominations, along with a faithful fan base. Funnily enough, the show's success is mostly due to it's blatant use of themes from 'Friends,' only using a running story line that's supposed to draw to a certain conclusion rather than just stretch on for season after season with no obvious destination.

Ted Mosby (Josh Radnor, voiced by Bob Saget for narration only) has a story to tell to his teenage children in the year 2030, about how he met their mother. The story has its twists and turns, forgetting no wrong turn, turning over every leaf in the same fashion that Ted has searched for his Miss Right. His group of friends sometimes help matters in his search for the future mother of his children, though occasionally they throw a wrench in his quest. Marshall (Jason Segel, 'Forgetting Sarah Marshall') and wife Lily (Alyson Hannigan, 'American Pie' films), along with Ted's ex Robin (Cobie Smulders) and the Fonz of the group, the womanizing Barney (Neil Patrick Harris, 'Harold and Kumar go to White Castle'), all play a vital part in the telling of the important tale surrounding the foundation of the love of Ted's life. When things look bleak, a new opportunity begins, in work, life, and love, and not just for Ted.

As a newcomer to this show (this Blu-ray release marks the first time I've viewed any episode), I found 'How I Met Your Mother' to be easy to jump into (one of the supplements in this release helped, but more on that later), with only one odd episode in the beginning of the season so dependent on previous happenings that piecing the story together became natural and easy, like I'd been with the show from the start. Having seasons one through three would have been nice (seriously, Fox, why release random odd seasons with no apparent rhyme or reason?), but they weren't necessary to fully "get" the show, a testament to the strengths of this sitcom.

'Friends' is first and foremost an obvious inspiration, in terms of the pace and style, and there are only minor differences between it and 'How I Met Your Mother.' The Ross-Rachel relationship, which is now symbolic of friends who become romantically entangled, unentangled, entangled again, is played out well with Barney and Robin, while the twists in that relationship caused by Ted's past romantic links with Robin echo back to the love triangle in later 'Friends' seasons that brought Joey into the main love story. Lily and Marshall are obviously the Chandler and Monica, the quirky guy and stable (compared to the others) girl whose marriage stands as the only true instance of stability in relationships. But enough about the odd coincidences...

'How I Met Your Mother' has an intriguing theme, which sometimes doesn't really fit with the episodes, as it is obvious that grown up Ted is a meandering storyteller. Not only that, but what dad tells his children about his sexual misadventures?! When numerous episodes involve the escapades (and sexcapades) of the other cast, it's hard to see why they fit in a tale about how he, personally, met a woman, though I suppose the focus on one character alone would kill a show from monotony. It's hard to take the show seriously at times due to the extreme off topic focus it often takes in approaching the grand scheme of things, as it's obvious, first getting in to the show, that we won't see what truly shapes the relationship between Ted and whomever Miss Right is for some time, so we instead see all the failed relationships that shape his identity. It creates a situation where one doesn't have to view every episode in sequence to follow along, a good-bad situation, as there is no real reward for being a loyal viewer, other than more zany acting by Harris.

Season Four follows Ted through a failed engagement, and how he copes with the loss of what he thought was the one, a too-fast-for-its-own-good relationship that implodes due to his inability to leave well enough alone. From awkward dates, to the hunt for the perfect burger (featuring a hilarious guest spot by Regis Philbin), to the discussion of an underpants radius, comfortable sleep attire, a love of interventions, sabotaging relationships, the stereotypical visit from an out of town sibling, and the struggles of the friends in the tough job climate, this season covers plenty of ground, both original and cliche.

As a noob, I have to say I was utterly amazed by the dedication of the extremely multifaceted performance Harris provides. From his perfect line deliveries to extreme physical comedy (not to mention the superb writing for his character), he steals the show at every turn, making both a convincing elderly man and a lovably deviant scamp. Segal is convincing in his man child performance, but I had a hard time believing Hannigan in her role, perhaps due to my constantly thinking of her and a flute. Maybe it's in the eyes, no matter what color her hair is, she'll always be that band nerd in my eyes. My favorite moments had to be the parody of 'Snatch''s character title cards, or the appearance of a 'Teen Wolf.'

'How I Met Your Mother' is a fun, lighthearted comedy that would be pleasant for a couples watch, or even as more teenaged family fare. It's not perfect by any means, but it accomplishes its goals in getting an audience to care for the characters and root for the romantic entanglements they put into play. There is great potential here, but the longer the story gets drawn out, the more likely I'll be upset that it took so long to just tell one tale, and the more likely I'll be to throw my arms up in complaint, as no teenage child has the attention span for this much storytelling. 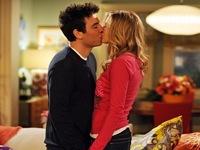 Skin tones stay natural and nicely saturated through most of the season, with the occasional molten lava face here and there, never flushed out. There are some amazing extreme close ups, mostly on Segals mug (which is so full of character), while at average range there is a nice level of definition, though nowhere near striking. Distances also maintain an acceptible level of clarity. Blacks are appropriate in their appearance, not too deep or bright, not worth really giving praise or disdain. Delineation can be an off and on affair, sometimes showing the best of dark details even in shadows, while other times hair just gets sucked into the void.

Colors are natural, sometimes a bit on the muted end of the scale, though dream/fantasy sequences pop gorgeously, and are clearly over saturated. The episode involving hiding under a restaurant table had obvious issues with lighting, so its colors come across as less than great, or completely unnatural, a lose-lose scenario. The picture as a whole has a fairly nice three dimensional feel, not to the point that it pops off the screen, but it certainly doesn't look cheap at all. Lastly, the composite background shots in the final episode of this season on the roof shake on one part, and stay still on others, creating a distracting, flat out ugly and cheap feel that the show really didn't have before that point. 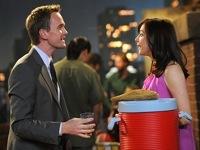 'How I Met Your Mother' reminds me of one of the tougher questions when reviewing a Blu-ray disc: does one judge a film or show by what is there and how well it brings one into the program, or does one judge it by intent, regardless of any technological deficiencies, that may be a part of the sound design. Fox has afforded the show a series of DTS-HD Master Audio 5.1 tracks that define this...ahem...age old question.

The dialogue for the show is never muffled, never garbled (in fact, it's never gonna give you up, never gonna let you down, never gonna run around and hurt you). The thing is, dialogue never comes from rear channels, hovering in its comfort zone at the front end of the room, no matter what angles a character may be at. There was a bit of a feedback undercurrent at times in the dialogue, but it's not really distracting, just noticeable.

Clutter from the laugh track (yes, sadly, this sitcom has a laugh track) is also focused from the fronts, not putting the viewer in the "audience," as it were. Rears were used sparingly with ambiance, with the often visited bar frequently sounding like it were about to get shut down due to not making a dime. Streets were never crowded or busy, creating a New York that's really about as happening as Fargo. In one sequence, a marching band plays, surrounding an entire room, yet music only comes from the front. I get it, really, that the sounds that we hear can all be interpreted as part of the narration, which would come in the form of the sit down between father and children, but that's really stretching things a bit to justify lazy sound design.

Rears did get some activity with swooshing cuts moving through a room, while, surprisingly, my subwoofer did get the occasional bit of rumble, though not from the city, rather random bits of score, and the occasional bit of emphasis. When the bass comes in, it's rather surprising, due to how often it isn't around for the party, but at least it's there. While I brought up the question fighting intent vs actuality, I have to go with my gut here and say that things could have been better. 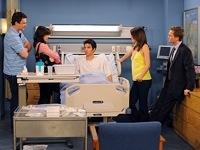 The Supplement package for 'How I Met Your Mother: Season Four' directly rivals that found on the DVD release. It's a somewhat shallow experience. 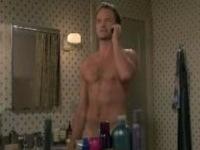 I'm no 'How I Met Your Mother' expert...far from it, honestly. I'm a n00b to the show, so I can't even tell if this is one of the best or worst seasons of the program. I can see why there's such a following, and I enjoyed the characters, but I don't see this as one of the best of the best. It's strong, and often quite funny, but it's far from perfect. The audio and video are just...there. The extras package is also pretty sparse for a TV on BD release. Fans will gobble this one up, but those unaware of the show should give it a try, as it isn't hard to figure out the story, and this show doesn't revolve around the previous episodes to be enjoyed.