Johnny Depp delivers the performance of a lifetime as Edward, an irresistibly charming creation with razor-sharp metal hands and a heart of gold. Edward's lonely life in a Gothic castle changes forever when he meets a kindhearted Avon Lady (Dianne Wiest), who takes him to a pastel paradise known as Suburbia. Thanks to his fantastic talents, Edward becomes a neighborhood sensation, but when he falls in love with Kim (Winona Ryder), he must go to extraordinary lengths to protect her.

The beautifully restored EDWARD SCISSORHANDS: 25th ANNIVERSARY Blu-ray showcases Burton's magical use of color, light and shadow, with clear, rich detail in even the darkest scenes. Considered Burton's most personal and favorite work, EDWARD SCISSORHANDS is one of Twentieth Century Fox Home Entertainment's most successful films. Nominated for an Academy Award® for "Best Makeup", the romantic dark fantasy film is recognized as a quintessential icon for Goth subculture. 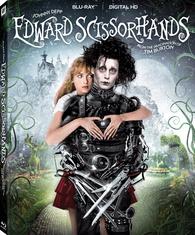 Once upon a time there was a misunderstood little boy named Tim. Ignored by his classmates and teachers, Tim tucked himself in the shadows of every room and watched other children play the games he wanted to play, hoping beyond hope they'd notice his lonely stares. As he doodled pictures of a sad, freakish man with scissor hands, he wondered why he couldn't make any friends. More than anything, he wanted to know why everyone seemed to work so hard to leave him alone.

This was director Tim Burton's childhood. Although today he brings a confident vision and a wildly inventive style to his films, Burton was a lonely kid who learned to use stories and imagery to express his feelings. After being introduced to audiences with crowd pleasers like 'Pee-wee's Big Adventure,' 'Beetlejuice' and 'Batman' in the late '80s, the director delivered an intensely personal examination of social isolation called 'Edward Scissorhands.'

This modern fairytale focuses on Peg Boggs (Dianne Wiest), a struggling saleswoman who decides to peddle her products to a house she's always avoided -- a decrepit old mansion on the outskirts of her comfy, suburban neighborhood. To her surprise, the sole tenant is a soft spoken young man named Edward (Johnny Depp) whose hands are made of long scissor blades. Despite his dangerous appearance, Peg decides to bring the gentle creature home. At first, Edward garners the love of Peg's family and friends -- he forms a friendship with her daughter (Winona Ryder), earns the patience of her husband (Alan Arkin) and entertains her friends with haircuts and hedge sculptures. But before long, the community's curiosity turns to apprehension and Edward slowly becomes the target of their fear and hate.

'Edward Scissorhands' is essentially a retelling of Mary Shelley's 'Frankenstein' with an angst-ridden splash of suburban satire thrown in for flavor. Edward isn't a hero or a villain per se; instead he serves as a catalyst that exposes the true nature of the other characters. By the end of the film, most of the townsfolk play some part in the paranoia, disloyalty and deception that victimizes an innocent man. At first glance, the story may seem like a cynical attack on human nature, but it's actually a carefully crafted film that poses a single question to its audience -- how do you treat the outcast in your neighborhood?

Burton's commentary certainly isn't subtle, but I've always found myself swept up by the emotion of this tale. Edward may be an exaggerated caricature of pain and rejection, but the director somehow manages to make a man with scissor hands seem entirely familiar. Edward is the shy kid from middle school that sulked at the end of my lunch table. He is the quiet boy that sat at the front of my bus and stared out the window. He is the guy I notice in the breakroom that never talks to anyone. In fact, he's every person who's ever felt they don't "fit in."

Of course, 'Edward Scissorhands' wouldn't be nearly as effective without Depp's nuanced portrayal of the film's titular character. He molds Edward into a sweet man who's been ravaged by tragedy -- a genuine human being who finds himself surround by wolves in an unknown wilderness. I could write at length about his character ticks and the sheer enormity of emotion he expresses with his eyes alone. He even infuses a restrained sadness to the film's funny scenes, making them much more poignant than their slapstick nature would initially imply.

Finally there are the film's supporting performances. Even though each role is intentionally over-the-top, somehow the actors manage to ground their individual caricatures in the real world. Arkin, Wiest, and Ryder are particularly impressive, infusing each of their roles with believeable complexities and inner conflict, ultimately enhancing Depp's own performance and allowing it to resonate throughout the film.

The standard Blu-ray version of the 25th anniversary edition of 'Edward Scissorhands' features a 4K remaster on a Region A BD-50 disc. Please note that there's also a collector's edition Blu-ray out there for twice the price, but the only difference being the packaging. Featuring new artwork, this edition replicates the new cover art on its glossy cardboard slip case. A code for a Digital HD copy is included. Nothing but a forced Fox reel runs before the creative, playfully animated and music-fueled main menu. 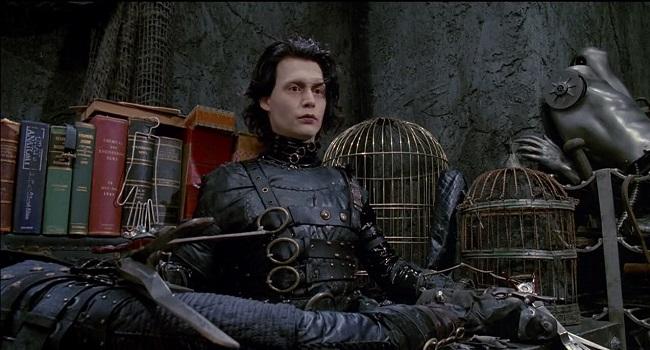 If you didn't pick up the original 'Edward Scissorhands' Blu-ray due to it being riddled with flaws, then this is the release you were waiting for. For those who own the problematic original edition, the 25th Anniversary Edition is worth the double-dip. Remastered in 4K, the new disc leaves behind the MPEG-2 encoding of old for a crisp 1080p/AVC MPEG-4 without all of the problems.

The film's black and white intro initially shows a lot of grain that's not retained for the duration. For the vast majority of the time, there's a superb crispness to the picture quality that allows for the details to be eye-catching. The stucco siding of every single home in the film carries a visibly rough texture. The pattern of the fabric in Joyce's large wardrobe can be see throughout the film in such detail that it's easy to imagine the feeling of it to the touch. The Inventor's hillside mansion may be visibly worn down with cobwebs and rotted lumber, but the green yard and well-trimmed hedges reveal great detail. Each sculpted shrub is comprised of hundreds – if not thousands – of leaves, each of which can be seen individually. Fine details can be seen on 25th Anniversary Edition Blu-ray that may not have been noticeable before: the textured pattern within the material that makes up Edward's iconic black costume; the occasionally-lifted faulty make-up scars on Edward's face; even the glued hair pieces on the sides of Alan Arkin's head. All of those details and more are as clear as day.

Long gone are the crushing blacks that once hid Edward in the dark corner of his lofted bedroom. He can now be seen in detail before he exits the shadow. The contrast is improved greatly and the pastel color palette is natural and realistic. I can only find two faults within this disc, one of which involves oversaturation. Three instances warrant unnaturally vibrant lighting that eliminates all texture and lifelike qualities to the actors who stand within them: two are brought on by police officers standing next to flashing red police lights; the third involves Peg adding decorations to her bright Christmas tree. The second fault comes from a few very unfocused shots. The biggest offender is the opening scene with Grandma Winona starting her bedtime story. As a long shot begins that moves through the room, out the window and over the snow-covered model neighborhood, the lack of focus is hideous. Aside from these two very occasional issues, this is the 'Edward Scissorhands' Blu-ray that we fans have been waiting for. 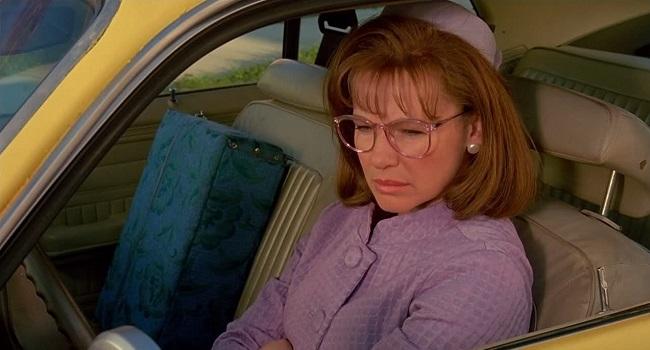 Thankfully, the audio package doesn't suffer from any glaring technical deficiencies. 'Edward Scissorhands' features a deliberately quiet DTS-HD 4.0 Master Lossless Audio track that handles the film's simple sound design with ease. Danny Elfman's score is easily the most kinetic element on the mix, filled with solid bass pulses and clear treble tones. His bouncy compositions flutter throughout the soundscape and aren't plagued by any fundamental problems. Dialogue is crisp, balanced, and clean -- I never had to strain to hear Depp's whispered lines or the lighter ambient elements in the soundscape. Although the soundfield is generally front heavy, the rear channels do get a little of action during the last act of the film.

Considering the fact that this 4.0 mix doesn't have an LFE channel and both rear speakers deliver identical sounds, this mix does elicit a few relatively minor complaints. As you would expect, bass booms lack a heavy punch and the soundfield integrity isn't quite as convincing as it could be. Still, it is an accurate representation of the film's original sound track, and I'm guessing that a 5.1 remix wouldn't have made a significant difference in a reserved track like this anyway. In the end, 'Edward Scissorhands' sounds great for what it is, but this certainly isn't the sort of track that will turn heads. 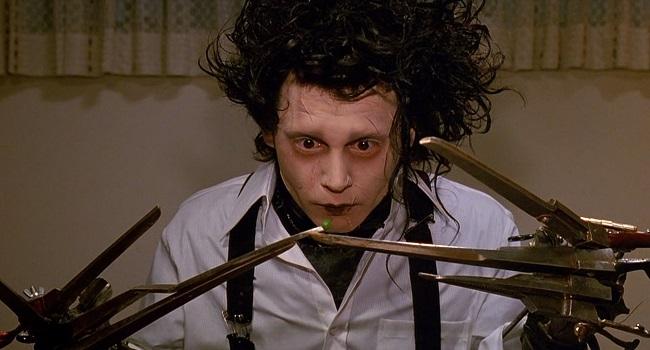 While this Blu-ray edition retains the three significant special features from the 15th Anniversary Edition DVD and the original Blu-ray release, unfortunately it's missing several other supplements, including fifteen minutes of interview clips with cast and crew, concept artwork and three TV spots. 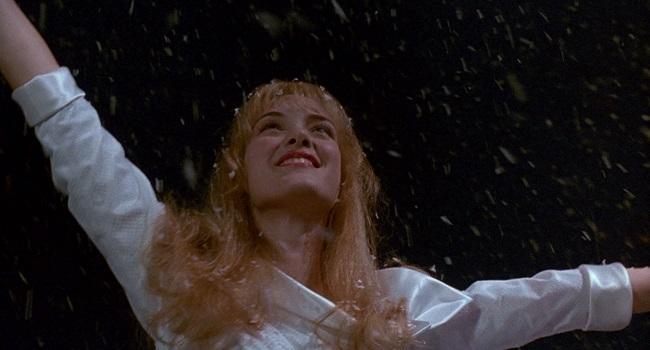 It's hard to believe that 'Edward Scissorhands' is already 25 years old – yet despite it's age, it has held up extremely well. Being a timeless bedtime story chock full of themes and human experiences that anyone of any age can relate to, it's still just as beautiful and relevant as it was in 1990. While the original Blu-ray was sub-par, the new 4K remaster is clean, sharp and full of detail. As far as I can tell, the 4.0 lossless audio mix is the same, which isn't a bad thing at all. Unfortunately, nothing has been added in the way of special features, so it's still lacking – but that's the only disappointing aspect of this new edition. Even if you already own the original edition, this new one is definitely well worth double-dip.

Sale Price 6.98
List Price 9.99
Buy Now
3rd Party 29.99
In Stock.
See what people are saying about this story or others
See Comments in Forum
Previous Next
Pre-Orders
Tomorrow's latest releases