Retired military commander Colonel Dale Murphy (Henry Rollins) hosts a simulated post-apocalyptic reality show where participants are challenged to survive a remote West Virginia wasteland. But the show turns into a nightmarish showdown when each realizes they are being hunted by an inbred family of cannibals determined to make them all dinner.

Out of all the films which have, and could have, been turned into money-making franchises, for some reason, I find the 'Wrong Turn' series one of the most surprising. Well, that and the Chucky chain, which was a real shocker as well. Strangely, what sets this series apart is the lack of a single recurring villain, or at least, one that is fully developed and expected to return with each sequel. Granted, Three Finger is the one in-bred freak consistent in all three movies, but he's more of a continual character than something the likes of Freddy, Jason, Michael, or even Chucky for that matter. He's simply a presence that gives the franchise its meat and bones -- then hacks it all up. Can you imagine that backwoods mutant becoming the official face of the series much like the other villains have?

For this follow up about a family of cannibal rednecks, Three Finger returns for the hunt of unsuspecting fodder. Only, his function in this sequel is less significant than in the previous movie. It seems as if he's been turned into the local butcher, so to speak. Though from the looks of how he maintains his work area, I'm pretty sure he's never been properly apprenticed and highly doubt a health inspector would give him a passing grade. The plot in this movie takes place four years after the events of the original, so maybe he learned a little something about old-fashioned cuisine cooking during that time. While it's possible he may not know the difference between prime cuts and flank meat, at least he loves his job, tenderizing and teasing the main dish with a knife and his shrill, cackling laugh.

At some point in the flick, an over-the-top drill sergeant, played by the incomparable Henry Rollins, is forced into a very unfortunate encounter with Three Finger at his outdoor kitchen. In my mind, Rollins will always be remembered as the lead singer of Black Flag (along with Keith Morris of course), but here he turns in an unexpectedly first-rate and funny performance. As the beefed-up, retired marine captain Dale Murphy, he hosts a reality TV show in the vein of "Survivor". Only contestants pretend the world has come to an end and must survive in the wilderness. The premise of the show is dreadfully overcomplicated and senseless. But needless to say, participants soon learn survival reality has crept into their artificial world, which is why we're watching this nonsense.

For those intimate with the genre, 'Wrong Turn 2: Dead End' follows the central ingredient of the horror sequel set forth by 'Friday the 13th Part 2' -- a higher body count, creatively gruesome kills, and more blood and guts than the original installment. Indeed, the movie opens with one of the most shocking and horrendous death sequences around, which is sure to bring a smile to the face of any gore hound. Apparently, the young lady who meets this terrible demise is Kimberly Caldwell. As for whom she is or why I should even know her name, I don't have the slightest clue. I suppose I don't watch enough television. But she was annoying enough that I enjoyed Three Finger greeting her with an axe.

Even more shocking is the fact that 'Dead End' is an entertaining follow-up to its predecessor, and the filmmakers actually give genre fans a fun, gory flick of hillbilly pandemonium. The script is structurally well organized and executed, which is quite an astonishing feat for straight-to-video fare. That's not to say, the movie is Oscar-worthy or anything. The characters are, of course, incredibly shallow and throwaway imitations of everything else we've seen before. But they serve their purpose, nonetheless, in moving the story along and leading us to the point of meeting the demented wannabe-Norman Rockwell family. It's nice to watch something where you can't guess who'll survive the unnecessary violence.

First time director Joe Lynch knows what his audience is looking for in a sequel, and he provides just that. He's also an obvious horror fanatic as he makes a clever reference to the original 'Texas Chainsaw Massacre' towards the end of the second act. Moreover, Lynch has the producer/cameraman of the faux TV show wear a t-shirt as a nod to one of the best survival films around: 'Battle Royale'. In the end, 'Wrong Turn 2: Dead End' serves as a fun, twisted genre entry to pass the time when nothing else is on the boob tube. 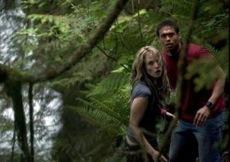 Even if the picture quality of 'Wrong Turn 2' is only about average, it's still better looking than its predecessor, which isn't saying a whole lot.

Clearly taken from an HD source, the 1080p/AVC transfer debuts with poor resolution, and contrast that's all over the place. There are times when the picture looks good, especially, and most obviously, in bright daylight scenes. But more often than not, whites bloom to the point of clipping and ringing in distant objects is quite noticeable. Grain is a bit unpredictable and interiors tend to highlight this fact. Details of fine objects are nicely defined in certain spots, but they're never consistently sharp. Indeed, the majority of the pic fails to ever truly impress. Brightness levels are strong, but black crush is rampant in low-lit sequences while the image remains mostly flat from beginning to end. Primaries are vivid and bold sans artifacts, making it the transfer's best feature. Unfortunately, the other hues suffer a tad and appear rather boring. In the end, it's not one of the best presentations available. 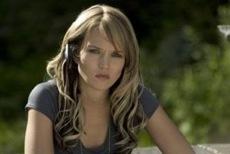 The DTS-HD Master Audio soundtrack, on the other hand, packs a meatier punch than the video.

Although not nearly as impressive as the first feature, the front soundscape displays an open, welcoming presence with good imaging and strong dialogue reproduction. Dynamics don't show much range, but they're stable and remain somewhat well-balanced throughout. Low-frequency effects, while lacking clean refinement, are put to good use in certain scenes, but they don't make much of an impact. Activity in the surround speakers is never fully realized or consistent. However, the mix does have its moments of atmospherics, like the rustling of leaves, flies buzzing around and echoes of action inside the old mill. The musical score too bleeds lightly into the background. Still, the sound design is good for a direct-to-video product, only it's not significantly effective.

Fox Home Entertainment delivers 'Wrong Turn 2: Dead End' with a supplemental package that matches its standard definition counterpart, except for the movie's original trailer. The material is nothing very extensive, but for fans, there's some good, meaty stuff to be found here.

While not as good as its predecessor, 'Wrong Turn 2: Dead End' is quite an entertaining surprise from first-time director Joe Lynch. It's two times the gory, despicable fun, and Henry Rollins becomes the highlight of the entire pic. This Blu-ray edition of the movie arrives with an average A/V presentation and the same supplemental material found on the DVD. While fans of the first installment will not be disappointed, everyone else might want to rent something else.

Sale Price 9.94
Buy Now
3rd Party 6.01
In Stock.
See what people are saying about this story or others
See Comments in Forum
Previous Next
Pre-Orders
Tomorrow's latest releases