Samantha is a high school science teacher at a low-income school about to close, and she has just found out she’s pregnant. Though her boyfriend, John, proposes and is thrilled to begin a new life together, Sam struggles with the idea of halting her career to be a full time mother. Simultaneously, one of Sam’s brightest students, Jasmine, has also become pregnant. Sam makes it her mission to get Jasmine into college and bonds with her over their impending motherhood. Unbeknownst to Same Jasmine is wiser than she gives her credit for, and when things don’t go exactly according to Sam’s plan, she must reexamine what is best for herself and for the people she loves.

Movies that tackle big life responsibilities tend to swing one of two ways, they're either dramas or comedies. The good ones keep that genre shift somewhere in the middle allowing for the humor of tough situations to come out while keeping the strong character drama moments intact. That isn't to say that strict comedies or dramas don't have their merits, but the middle ground often offers some of the most pleasing results. 'Unexpected' is a drama-comedy from writer and director Kris Swanberg and co-written by Megan Mercier that brings a nice perspective to the drama and the humor that comes from discovering you're about to become a parent.

For Chicago inner-city public high school science teacher Samantha Abbott (Cobie Smulders), life may not be entirely mapped out, but it's on the right track. She's successful at reaching her students and getting them to push themselves and has even inspired one girl named Jasmine (Gail Bean) to shoot for college. At home, Samantha has a nice amiable live-in boyfriend named John (Anders Holm) whom she dreams about living a nice life with in the future. Sometimes the future has a funny way of catching up to the present very quickly.

When Samantha learns that the school she teaches at will be closing due to Chicago city budget cuts, she will in effect be out of a job. But that's okay because she's got her eye on a job at the Field Museum helping them formulate their school curriculum that schools across the city teach. The hitch in Samantha's plan is the very sudden and unexpected news that she is pregnant. While she and John obviously didn't plan this, they are happy at the news and run down to the Justice of the Peace for a quick wedding, much to the chagrin of Samantha's mother Carolyn (Elizabeth McGovern).

With personal, as well as parental responsibilities hitting Samantha, she learns that her prized student Jasmine is also pregnant. Wanting the most for the young girl, Samantha dedicates every spare moment she has to helping Jasmine. She helps the girl get into Illinois University, secure housing and ensure that Jasmine's future is on the right path - even when Samantha hasn't addressed those issues herself. With her own dreams and life goals on the line, Samantha is going to have to figure out what it means to both be an individual as well as a parent without alienating the people closest to her. 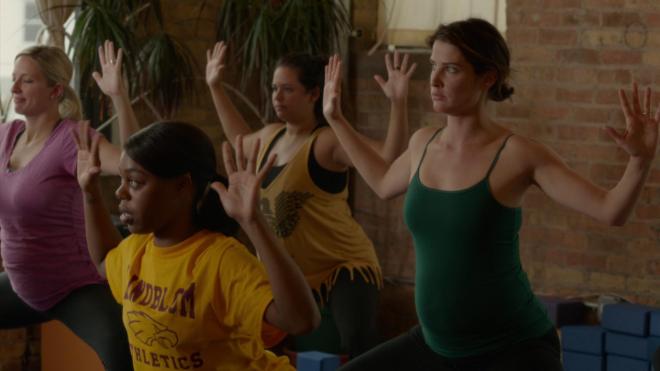 To be perfectly frank, 'Unexpected' was actually a bit unexpected. For starters, while the trope of the suburban affluent teacher inspiring the economically challenged inner-city student is absolutely present, this film thankfully dodges most if not all of the genre pitfalls. Jasmine doesn't come from dire straights exactly - even though her family's financial situation is less than secure. Samantha is hardly a saint herself and isn't coming from the place of experience as she attempts to guide Jasmine's future. In a lot of ways the two women are on a similar emotional plane, even if they're separated by better than twelve years.

While Samantha works to help Jasmine and the drama that comes from those tough scenarios is present through most of the film, 'Unexpected' also plays up the value of humor in the situation both women find themselves in. Cobie Smulders does a fine job as a woman who thinks she's got her life situation figured out and then goes to pieces when an unintended pregnancy points out she doesn't. On the flip side, you have Gail Bean as Jasmine. She's a woman that has grown up through some pretty hard times and has forged herself a path to a better life and the knowledge she's pregnant only reinforcers her resolve to do better for herself and her child.

'Unexpected' while fairly predictable is a solid piece of entertainment all around. Even though I felt like I knew what was going to happen and about where and when in the story, I still enjoyed how the film unfolded. I appreciated that the movie took a look at various life situations like parenthood, education, and employment and didn't push an agenda. It is a film that certainly has some opinions on the subject, but Kris Swanberg and her co-writer Megan Mercier wisely didn't state any of those opinions definitively and recognized that one solution doesn't fit everyone.

If you're in the mood for a nice and gentle comedy drama, 'Unexpected' should fit the bill nicely. It's earnest without being patronizing and honest without being boring. Don't get hung up by the odd cover artwork. The movie is certainly worth a watch. I found the film to be delightful and after a barrage of Westerns, Thrillers, and Horror films I've had to review of late, 'Unexpected' was a welcome breath of fresh air.

'Unexpected' arrives on Blu-ray thanks to Alchemy pressed onto a BD25 disc and housed in a standard case. The disc opens to a barrage of previews for other Alchemy releases before arriving at the film's main menu.

With a pleasing 1.85:1 1080p image presentation, 'Unexpected' is a welcome sight on Blu-ray. Detail levels are spot on creating a nice realistic presentation as close-ups, wides, and middle shots all look fantastic and allow you to appreciate the appearance of the actors as well as the Chicago scenery. Colors are slightly pushed into the cool blue range, but this is an effect that works to maintain the winter/spring timeframe the story takes place in. Thankfully this push doesn't really affect flesh tones or primaries negatively. When the film shifts to summer, colors are a bit warmer and more natural looking, but again, flesh tones are well maintained. Black levels are strong and richly inky and provide a nice sense of three-dimensional depth while not experiencing any crush issues. Without any compression issues to speak of, 'Unexpected' has a fine HD presentation.

'Unexpected' arrives on Blu-ray with two audio tracks to choose from, a Dolby Digital 2.0 track as well as a Dolby TrueHD 5.1 track. If I'm going to recommend one over the other, I would say pick the 5.1 mix, although the difference between the two is negligible. The disc automatically selects the 2.0 option so if that's not to your liking make sure you visit the settings menu. Taken as a whole, both tracks are very nice and perform their duties well. The tracks are well balanced and levels rarely spike so you don't need to monitor volume. Dialogue is front and center and comes through with crystal clarity. The area of imaging and sound effects is where I tip my hat to the 5.1 mix. The TrueHD 5.1 mix spreads the sound effects and ambient sounds around the channels nicely. The film's subdued score from composer Keegan Dewitt also has just a bit more room to breath here and helps set the tone better. Where the Dolby Digital TrueHD track loses some points is that it doesn't keep the surrounds always engaged - which is fine given the nature of the film - but it is still the stronger of the two available options.

No supplementary materials are present.

This is a case where you shouldn't judge a film by some cheesy cover art. 'Unexpected' proved to be a nice and welcome drama-comedy with a lot of heart and honesty. It's a film that raises some strong and important societal and personal life questions but is smart enough to not pretend it has all the answers. Alchemy has done a great job putting a sparkling video and a strong resonate audio track onto this Blu-ray release. The only extra features are the same previews for other titles that load automatically when you start the disc. I'm calling this one as worth a look.

Sale Price 1.78
Buy Now
3rd Party 1.76
In Stock.
See what people are saying about this story or others
See Comments in Forum
Previous Next
Pre-Orders
Tomorrow's latest releases