Dark Was the Night

Maiden Woods is a remote and quiet town of decent hard-working people, but something stirs in the dark woods surrounding this isolated community. After a logging company decimates an area of the forest, a rash of increasingly violent and unexplainable events transpires. Sheriff Paul Shields (Kevin Durand) and his deputy (Lukas Haas) struggle to confront their own personal demons while facing down a new breed of raw terror that is possibly older than humanity itself… and much, much hungrier.

Monster movies or creature features are the bread and butter of the Horror genre. The ooey gooey creatures that are either freaks of nature run amok like the shark from 'Jaws' or the things that go bump in the night and haunt our nightmares like the xenomorph in 'Alien' are the prime examples of this genre. These are the movies that prey upon our worst fears of mortality, the idea that something outside of our normal world will creep up behind us and turn us into their lunch. 'Dark Is The Night' is just that sort of creepy creature feature creation. It's a movie that works as a slow burn and builds to a thrilling climax that is disappointedly undercut by some poor visual effects work.

For the small town of Maiden Woods, life moves at a crawl. Not much happens and the criminal element is virtually nonexistent - and that's exactly the way Sheriff Paul Shields (Kevin Durand) likes it. He needs the calm after the accidental death of his son six months earlier. With the weight of parental responsibility keeping him down, he's estranged from his wife Susan (Bianca Kajlich) and their young son Adam. With a fresh deputy Donny (Lukas Haas) newly imported from New York City, Maiden Woods is well guarded, at least that's what everyone seems to think.

After a team of loggers go missing from a town 90 miles north of Maiden Woods, strange things start to happen. First, a local rancher loses one of his horses. Without any evidence, one would assume the animal jumped the fence and tore off into the woods and it would turn up later, that is until some strange hoof-like animal prints start showing up all through town that didn't come from any horse. Paul figures it to be a prank by some bored teenagers. Some folks even assume that it's the work of city-boy Donnie poking some fun at the yokels. Whoever the culprit may be, it's got the town on edge. A local named earl (Nick Damici) starts to take stock in the stories of his Native American ancestors that it's the work of a strange demon-like creature who has been disturbed from its slumber. While most people write off this story as an old legend, legends have a tendency to be based on some form of fact.

When a group of deer hunters are attacked and their bodies found hanging in the tall branches of the trees, Paul, Donny, and the rest of Maiden Woods begin to believe the strange stories that have circulated for centuries. As a massive snowstorm threatens to strand the residents, they have no choice but to band together inside the town's church. All they have to do is ride out the storm until help comes, but when the unseen creatures gets hungry, the residents of Maiden Woods are in a greater danger than they could have possibly ever imagined.

What 'Dark Was The Night' does right is its slow burn pacing. At a swift 98-minute runtime, this is a movie that likes to take its time, introduce the characters, let you get to know them while steadily building a sense of dread. We get to know Paul, we learn he blames himself for his son's accidental death and we see the effects this blame has on his family. We meet Donny and get to know why he's no longer a cop in New York and what attracts him to small town living. We get to meet the locals and their ways. All of this time works to the film's advantage because once their world starts to become upended, we see their paranoia rise as they learn that rural living doesn't keep them any safer. 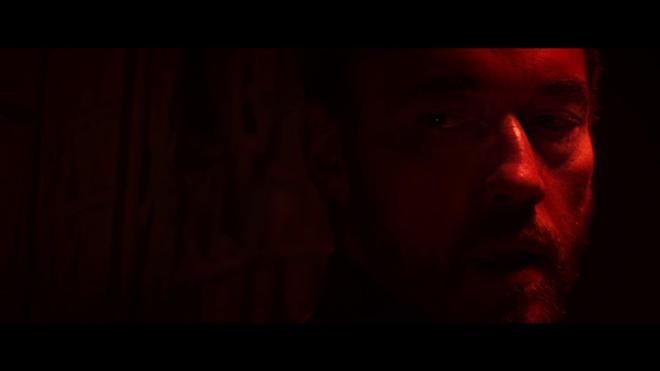 For the vast majority of 'Dark Was The Night,' I was hooked and rooted for the characters to not only survive the evil that has befallen them but also sort out their individual personal issues. With actors Kevin Durand, Lukas Haas, Bianca Kajlich and Nick Damici playing to their respective strengths and imbibing their characters little quirks and nuances all the while the creature stalking the woods of Maiden Woods becomes more brazen. It's a darn creepy and effective movie that builds slowly dropping just enough jump scares and little glimpses of the creature to keep you invested. As it gets creepier and creepier, you want to keep going with the movie, and most importantly you want to actually see the creature.

Unfortunately, in the closing moments we get our full view of the creature that has stalked 'Dark Was The Night' for the last hour and a half. I'll say again that up to this point I was really digging on this flick and was genuinely creeped out and was having a heck of a good time, but that first full sight of the creature was like someone letting the air out of a balloon slowly creating that ear-splintering whistle sound. Picture a chunk of extra crispy fried chicken with two legs and claws burnt black - that's probably the best way to describe the creature.

Where shadows and low lighting worked to create a sense of dread, and some smart practical effects use where you may see a claw or the creature's feet, the big reveal spoils all of that build up work. If I didn't know better I would have assumed that this was some sort of previz placeholder digital effect until the real creature was ready to be inserted later. Sadly, it is the creature we're left with. I don't mean this to be an argument of practical versus CGI effects either, after all you can have a crappy-looking monster suit too. For a movie that spent this much time hiding the creature… it easily could have stayed hidden and had been just fine.

At the end of the day, in spite of my reservations about the creature design and effect execution, I will say that I thoroughly dug 'Dark Was The Night.' Written by Tyler Hisel and directed by Jack Heller, the movie is a classic-style monster movie. It plays against your worst fears of isolation and paranoia in all of the best ways and the cast is spot on. If you're game for a solid creepy monster thriller, give 'Dark Was The Night' a spin. It's a decent watch all around and a good way to spend an evening with the lights turned off.

'Dark Was The Night' arrives on Blu-ray from Image Entertainment and RJL entertainment and is pressed onto a BD25 disc. Housed in a standard case with slip cover, the disc opens to an animated main menu. Note: This Blu-ray release is exclusively available through Best Buy until November 3rd.

'Dark Was The Night' maintains a creepy and richly detailed 2.40:1 1080p image that is impacted only because of an odd blue color grading choice. During every outdoor daylight scene of the film, the image is bathed in blue. Not as if a blue light was used to accent the scene - nope, all blue, as if it was a post-production decision. While the effect does provide a cold wintery creepy mood, it makes it tough to judge the over all picture quality as contrast levels appear slightly boosted with diminished black levels. However, virtually every indoor scene enjoys a normal color pallet with healthy looking flesh tones and black levels that are rock solid and give the image a nice three-dimensional punch. In spite of the color changes, detail levels are fantastic allowing you to appreciate facial features as well as the cold, rustic, forested scenery. It's a solid transfer that does right by this movie.

'Dark Was The Night' gets a lot of creepy power from it's English DTS-HD MA 5.1 audio track. For the most part, this is a fairly quiet film. The score from composer Darren Morze hits the somber low tones while the rest of the track is filled with the sounds of low whistling winds and the subtleties of shoes walking on dry leaves, and the slow creaking of tires on rural roads. Dialogue is crisp and clear and is largely center channeled focused. The track really comes to life when the lights go out and night time takes over the scene. It's these scenes where the audio becomes a lot of fun as every little creak or loud bump in the night gets a nice extra little kick and the impressive imaging for the track makes sure that those sound elements come at you from every direction. All around, this is a pretty great audio mix and lends itself well to the creepy nature of the flick

Behind The Scenes: A Trip To Maiden Woods: (HD 7:34) A brief, but informative look at how they achieved the look of the film through on set and post production tricks.

Q&A With The Cast Of Dark Was The Night: (HD 8:38) Shot at Screamfest, It's an okay extra, but the fan questions were edited out, so there really isn't any context for what they're talking about.

If you're hungry for a solid monster flick with a constant looming sense of dread, 'Dark Was The Night' should fit the bill nicely. It's a very strong flick that is only knocked down by a silly looking monster. Forgive that aspect and give this one a go. It's worth the watch and Image Entertainment and RJL Entertainment have done a great job pulling this Blu-ray disc together with a rock solid A/V presentation. Extras are a bit slim, unfortunately, but at the end of the day, 'Dark Was The Night' is recommended for those looking for a good creepy thriller.

Sale Price 10.53
List Price 29.97
Buy Now
3rd Party 14.49
In Stock.
See what people are saying about this story or others
See Comments in Forum
Previous Next
Pre-Orders
Tomorrow's latest releases