A futuristic, fatalistic epic animé adventure, Harlock: Space Pirate (2013) is an adaptation of the spectacularly popular Leiji Matsumoto saga about an intergalactic war with Earth as the ultimate prize and the eponymous Captain Harlock as its only potential defender. Fighting against the Gaia Coalition, Harlock and his loyal crew are the sole beings with a chance of defeating the Coalition and returning humanity to Earth.  Two disc set: Original Japanese Version (Disc 1) and International Cut (Disc 2).  Both versions are in 2D and 3D.

When you take the time to find a new movie that you've never seen before, once the flick gets going do you feel like you're missing something? Almost like you arrived late to a big party and all of the fun has already happened so you're left hearing about what a great time everyone else had? Shinki Aramaki's 2013 film 'Harlock: Space Pirate 3D' feels just like that and for good reason. Based on the long-running manga series by Leiji Matsumoto, as well as several other animated Harlock adventures - it almost feels like you need to have seen all of those other films and read the manga to be fully caught up to this 'Harlock: Space Pirate 3D.' While you may feel way behind to what's happening on screen, the film pays off with beautiful animation and some fun space battles.

Mankind's population boomed and forced a great expansion across the galaxy. As the human population continued to grow and grow, no planet or star system could have enough resources to sustain such a large population. With worlds laid to waste and mankind on the decline, humans are trying to return to Earth. After a gigantic battle for control of our home world, it was decided that Earth should remain a sanctuary and that no human could return to her. In order to ensure no outworlder sets foot on Earth, the Gaia Coalition and their massive armada of warships maintain humankind's downfall.

One man, the enigmatic and seemingly immortal Captain Harlock and his own personal army of warriors confront and regularly disrupt the Gaia Coalition's efforts. With a dark matter powered warship that can heal itself known as the Arcadia, Captain Harlock, and his crew have the means to shatter the Gaia Coalition and allow mankind to return to Earth. The Gaia Coalition has turned to a young man by the name of Logan to infiltrate and assassinate Captain Harlock. But as time goes on and Logan gets to know the crew, he begins to question his loyalties - especially when he learns that Harlock's plan could undo centuries of death and destruction and bring peace and balance back to the universe.

'Harlock: Space Pirate 3D' is a grand and sweeping space opera anime event film that makes little to no sense if you start to break down plot points and character motivations. Just when the film sets down a story rule like mankind is dying, it introduces Captain Harlock who looks like a young man but is actually well over 100 years old. Or when centuries earlier and humans tried to return to Earth hand there was a gigantic war for the planet - it was suddenly decided that no one could live on Earth? Much of the plot and story points to this film run like that; state one thing but show the exact opposite. 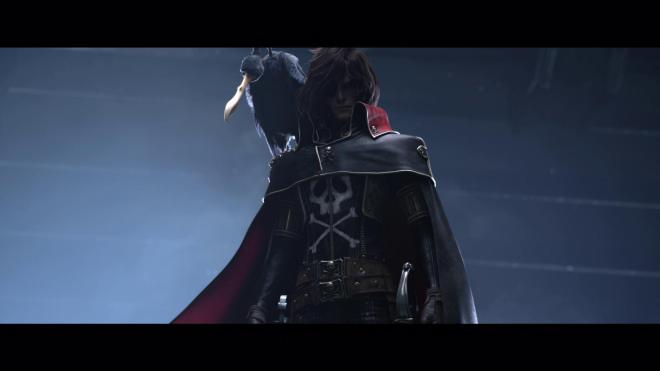 While the mechanics of 'Harlock: Space Pirate 3D' are clunky and clumsy, it's the thrust of the story and themes of duty, honor, and loyalty that keeps this movie rolling at a great clip. Some fun space battles don't hurt either for that matter! Beautifully animated, this film is eye candy in the best ways. Bright and colorful with an inventive universe design scheme and character renderings that instantly hooks your attention - even if you may not entirely understand what's happening or why.

This outing for the popular hero Captain Harlock was clearly intended to be a standalone adventure. Nothing about the film suggests that you should have seen other films or read the manga volumes before jumping in. That said, I can't help but feel like the guy late to the party and has missed most of the fun. There is an amount of familiarness to so many of the characters and events that if you don't already know who they are or have a slim understanding of events, you might not get what's happening. The international cut of the film which runs four minutes shorter cuts a lot of the unnecessary exposition that muddies the waters at times, but it still isn't quite a lean, mean, sci-fi fantasy machine. There is a lot of story and character bloat on screen and it's difficult to pinpoint what should stay and what could go. I'll put it this way, if you find yourself at all confused for the first 40-50 minutes of this movie, that's okay. Once the main plot gets going after that, 'Harlock: Space Pirate 3D' proves to be a rip-roaring adventure that is ultimately worth the time you put into it.

'Harlock: Space Pirate 3D' arrives on Blu-ray as a 2-Disc special edition set from Twilight Time. Housed in a clear 2-disc Blu-ray case. Limited to 3,500 units, each cut of the film is given their own respective Region Free BD50 disc to occupy. Both discs load to their respective main menus allowing you to chose either a 2D or 3D presentation. Both discs feature the same extra features save for the isolated score track which is only found on Disc One. Also included in this set is a booklet featuring stills from the film as well as an essay from Julie Kirgo.

Both the Japanese and International Cuts of the film feature the same 2.39:1 1080p transfer. The 2D versions encoded in AVC while the 3D encoded in MVC. From the first moment of the film, colors are absolutely striking, bright and beautiful primaries with lush reds, vivid greens, and deep blues. Everything in this CGI animated adventure is rendered beautifully - from single strands of hair to the feathers on Harlock's pet bird are visible. Black levels are very dark and rich allowing the spaceships that are featured in the film to feel gigantic - especially the Arcadia.

The aspect of size and depth are routinely exploited in the 3D presentation. There are very rarely any "in-your-face" moments as this 3D presentation favors the "window-into-another-world" view. That said, there are some moments where depth is lost, this is primarily an issue if a character is wondering inside the Arcadia and it's very dark, the image tends to feel very flat, or if there is any depth on display, it can feel like a pop-up book type image. This isn't always prevalent so don't worry that the whole film is like this. Much of the film is bright and colorful allowing for an immersive 3D presentation - especially during the big space battles!

The original Japanese cut features Japanese DTS-HD MA 5.1 with English subtitles while the International cut provides a pretty decent English Language DTS-HD MA 5.1 track. Both tracks are very impressive. Dialogue is crystal clear and never an issue to hear - especially when the big battles get going. The space fights and a sequence with a gigantic worm offer a wonderfully immersive surround sound experience. From the booming engines to the thundering cannons of the ships, there is a constant sense of space and directionality to the audio tracks that makes this film a joy to listen to. Levels are rock solid and you shouldn't need to adjust your volume any - but I would recommend you turn things up a bit to get the full effect. Imaging is also very strong as there is a constant sense of channel movement throughout ensuring that the side and rear channels are constantly engaged.

Interviews: (HD 28:11) These interview segments include a director and screenwriter discussion between Director Shinji Aramaki and writer Harutoshi Fukui, a fantastic interview with Harlock creator Leiji Matsumoto, as well as solo interviews with the writer and director on their own. All around this is a ton of cool information and if you're a fan of the flick it's worth hearing what these people have to say about their work and this project.

The Making of 'Harlock: Space Pirate': (HD 26:06) This is actually a fascinating look at the processes of making and animating the film. It also goes a long way towards explaining a lot of the history of the franchise and how elements of past adventures pop up for this outing of the character.

Venice Film Festival World Premiere Highlights: (HD 12:52) This is a cool look at the reception the film got at the film festival.

While I may not have felt like I was in the loop for much of 'Harlock: Space Pirate,' I did come away having a good time. A lot of the film reminded me when I was very little watching cartoons as a kid. This movie has that kind of energy to it. You may not fully understand what's happening where, when, or why, but it's a visual pleasure that's exciting and fun if you give yourself to it. Twilight Time has done a solid job with this release featuring a knockout 2D/3D presentation with a dynamic and engaging audio track to match. Extras a solid all around and the isolated score is worth the listen. I'm calling this one Recommended.

List Price $34.95
Go To Store
See what people are saying about this story or others
See Comments in Forum
Previous Next
Pre-Orders
Tomorrow's latest releases