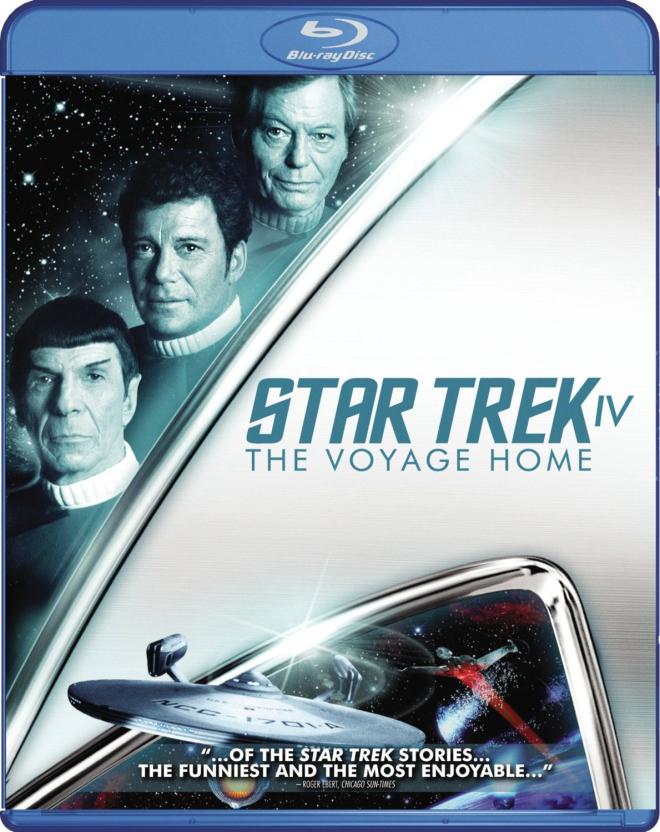 "A double dumb ass on you!"

'Star Trek IV: The Voyage Home' is often described as the 'Star Trek' movie for people who don't like 'Star Trek'. Well, I do happen to like 'Star Trek', and I think that part 'IV' is one of the worst of the entire series. Coming as the conclusion to the "Genesis Trilogy" of films, 'Voyage Home' is to 'Trek' what 'Return of the Jedi' was to 'Star Wars'. It has a decidedly lighter tone than its predecessors, and is filled with goofy kid-friendly humor in an attempt to take the edge off the depressing events that transpired in the middle portion of the three-film story arc. The ploy apparently worked. The movie was a big hit in its theatrical release (as was 'Return of the Jedi') and is usually remembered fondly, but has really not held up well to the passage of time.

As most viewers will recall, this is "the one with the whales." Picking up soon after 'Star Trek III', we find the former crew of the starship Enterprise wrapping up their stay on planet Vulcan, where they've been visiting to restore the "katra" (soul) of their recently-deceased friend Spock into his freshly-regenerated body. By this point, he's mostly back to his old self. Their beloved ship having been destroyed last entry, Kirk, McCoy et al. have been slumming it in the captured Klingon rust bucket they've coyly christened the HMS Bounty. Ordered back to Earth to face court martial for their insubordination, our heroes arrive just in time to witness the planet under threat from a massive alien probe of unknown origin (a plot device blatantly recycled from 'Star Trek: The Motion Picture').

Spock quickly ascertains that the probe has been trying to contact the planet's native population of Humpback Whales, which have sadly gone extinct by the 23rd Century. Naturally, the most logical course of action is to slingshot around the sun, time travel back to 1986 (hey, that's the same year that this movie was released!), and pick up some whales for the return trip back to the future. With their ship's cloaking device engaged, the crew lands in San Francisco. Cue some wacky fish-out-of-water hijinks as the characters bumble around town trying to look inconspicuous while searching for an aquarium and "nuclear wessels." Kirk, being Kirk, somehow manages to find a love interest (Catherine Hicks, future '7th Heaven' mom), whose feathered hair and sweater/skirt combo are just the epitome of mid-'80s loveliness. Wouldn't you know it, she also happens to be a marine biologist who might be able to hook him up with a pair of Humpbacks.

Although 'Star Trek III' had been a financial success, it wasn't nearly as well-liked by most viewers as the earlier 'Star Trek II'. Paramount executives wanted another sequel, under condition that it be broader in appeal to non-Trekkies. The time travel gimmick allowed the producers to set the story primarily in the (then) present day, so as to lure in audiences perhaps familiar with the Kirk and Spock characters, but not so interested in all that "science fiction" stuff. Coincidentally, it also happened to save them a lot of money on special effects. A decision was made early on to pitch this adventure to kids by avoiding the use of a villain or any notable violence.

Despite a screenplay co-written by 'Wrath of Khan' director Nicholas Meyer, 'Voyage Home' is a sloppy affair. The script is filled with dopey humor and glaring plot holes. That alien probe disables the power to any electronic device in its vicinity, except of course the power for important things like Life Support, artificial gravity, or communication, which are conveniently unaffected. Attempting to stay hidden and out of the way, Sulu parks the invisible spaceship right in the middle of Golden Gate Park. It's not like anybody goes there in the summer, right? When Scotty needs to illustrate the impossibly-complex formula for a substance called "Transparent Aluminum," about 10 seconds of mashing away at an Apple IIe keyboard gives him a beautifully-animated 3D rendering. Ha ha, that's so cute. It's also kind of like calculating pi to the 100th decimal in the same amount of time, using only an abacus.

Leonard Nimoy returns to the director's chair, and once again lazily stages an important scene of characters watching clips from the last movie as if it were video footage. The contrivance is handled even worse this time, because said footage shows the Enterprise being destroyed from a variety of angles outside the ship. Never you mind where all those magical cameras filming the event were supposed to be. It's best not to think about such things. The director surely didn't.

To be fair, 'The Voyage Home' has breezy pacing that must have seemed to audiences of the time like a welcome respite after the nail-biting tension of 'Wrath of Khan' and the operatic dirge of 'Search for Spock'. The cast is also very relaxed and seems to be having a good time. The preachy "Save the Whales" theme was the trendy political cause du jour, and who wants to admit that they don't love whales?

'Star Trek IV' was and continues to be one of the more popular films in the franchise. But it does nothing for me. Every time I watch it, I like it a little less. Its weaknesses only become more apparent with repeated viewings, and its few redeeming qualities are less and less able to hold the picture together.

'Star Trek IV: The Voyage Home' has been released on the Blu-ray format as part of two separate box sets from Paramount Home Entertainment. The film is included in both the 7-disc 'Star Trek: Original Motion Picture Collection' (which includes the first six films in the series), and the 3-disc 'Star Trek: Motion Picture Trilogy' (which includes only the second through fourth films, comprising the "Genesis Arc"). In either case, the 'Voyage Home' disc itself is identical. 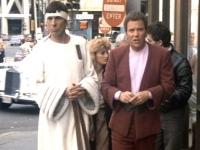 The quality of video transfers among the movies in the 'Original Motion Picture Collection' is quite a mixed bag. Unfortunately, 'The Voyage Home' is the worst-looking of the lot.

As with all the other 'Trek' films, the 1080p/AVC MPEG-4 transfer here is presented in the movie's 2.35:1 theatrical aspect ratio. Things start out fairly well. About the first 20 minutes or so have a clean and reasonably sharp image. The contrast range is perhaps a little dim, even in bright scenes, but nothing too objectionable. Some Digital Noise Reduction artifacts such as frozen grain patterns and slightly rubbery facial features are noticeable, though (at this stage) not as severe as the 'Star Trek III' Blu-ray.

The exact point where things turn south is difficult to pinpoint. There's a gradual degradation of picture quality as the movie goes along. By the middle section of the film, the image becomes quite soft. It doesn't look like soft-focus photography (which is an issue in the first two movies). Nor is it terribly smeary, as will typically result with heavy DNR. The picture just loses a considerable amount of detail and texture. Honestly, as I watched it, there were long stretches of movie where I was ready to proclaim that the disc wasn't a high-def transfer at all. It looks, in many scenes, little better than upconverted standard definition.

Comparing the Blu-ray against the DVD edition of the movie afterwards disabused me of that notion pretty quickly, however. As poor as the Blu-ray is, the DVD is just an outright blurry mess. As the alien probe approaches Earth, the Blu-ray resolves individual windows and lights on Spacedock, whereas they all blur together on the DVD. The DVD is also coated in dirt and debris in all of the movie's special effects sequences (a common problem associated with optically-composited effects of the era), most of which have been cleaned up or digitally painted out on the Blu-ray.

Still, the disc looks very poor. In addition to all of the above, some light edge enhancement has been applied, likely in an ill-advised attempt to sharpen the picture back up. It doesn't improve detail any, and just makes grain look noisy. Severe color banding artifacts are evident in the bright light emanating from the alien probe and the underwater scenes.

Almost hilariously, the picture pops back into life right near the end, as if the transfer operator had been napping and suddenly woke up in time to fix things before the credits rolled.

I'll give the Blu-ray credit for being a big improvement over the DVD (which was no great shakes by SD standards), but 'Star Trek IV' is in desperate need of a fresh film-to-video transfer.

At least the disc sounds better than it looks. The lossless Dolby TrueHD 7.1 soundtrack has a full-bodied sound, with a broad and expansive soundstage for Leonard Rosenman's score. The mix has good directionality, and fairly active use of the surround channels for a movie from 1986. The alien probe delivers some thumping bass. The high-pitched whale song effects are sharp and clear.

With that said, the movie's sound design does become sonically duller during most of the scenes set in the 1980s, which are more dialogue-focused and forward-centered. The space scenes are a lot more active, but of course are a much smaller part of the movie. Even so, the soundtrack is very satisfying.

Viewers with 2.35:1 Constant Image Height projection screens may take note that, unlike the other films in the series, 'The Voyage Home' has no subtitled alien dialogue. 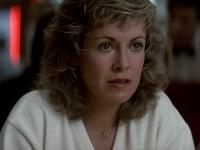 The Blu-ray is also loaded up with bonus features. Just about everything from the 2-disc Special Collector's Edition DVD has been carried over.

The only item missing from the 2-disc Special Collector's Edition DVD released in 2003 is the text trivia commentary by Michael and Denise Okuda. The information in that track was mostly consolidated into the new Library Computer feature.

Though I bet that it's one of Hayden Panettiere's favorite movies of all time, 'Star Trek IV: The Voyage Home' has never been one of mine. I've always found it overrated, and time hasn't been all that kind to it. The Blu-ray video transfer here is the weakest of the set, but still an improvement over DVD. The audio is good, and bonus features are plentiful.

Sale Price 7.62
Buy Now
3rd Party 2.49
In Stock.
See what people are saying about this story or others
See Comments in Forum
Previous Next
Pre-Orders
Tomorrow's latest releases