Fatherland aka Singing The Blues In Red

Part of telling a great story or creating a wonderful film is having a central theme that runs throughout the story. Some movies are better at balancing their central idea than others, but at their core, most movies are making a statement of some kind and the following ninety minutes to two hours is dedicated to expounding on that idea. However, every now and again, a theme can get a movie stuck in movie muck and actually drag down a solid story. Sometimes a filmmaker can just have too many themes and does a poor job of juggling all of those ideas on celluloid. Ken Loach's 1986 film 'Fatherland' juggles the ideas of freedom of speech and artistic integrity but doesn't quite manage to merge the two ideas into a cohesive final product.

East Germany, hidden behind its wall of concrete and stone is a place that actively stifles personal freedom and forms of expression that the government deems dangerous to the state. That is why musician Klaus Dittemann (Gerulf Pannach) has taken political refuge in the west. His music was deemed to be a threat and was told by the East German government that he could no longer perform or express himself through music. As a cavalcade of reporters grills him about his motivations for moving to the west, he casually tells them that he doesn't want to be there, he just is there. As it happens he has left behind his wife and son in order pursue his artistic dreams. It turns out Klaus's father did a similar thing decades earlier while Klaus was still a small boy.

With freedom in front of him and oppression in his wake, it would seem life should be smooth sailing for the artist, only more complications arise. Where before he was followed by agents for the GDR, he's now being watched by western government intelligence agencies. Where Klaus was able to sing about what was in his head and heart and be silenced politically, he's now being silenced capitalistically as his music doesn't reach a targeted demographic. But was the music the reason Klaus left East German behind or was it simply a means to an end? It turns out that Klaus' real goal is to find his estranged father who now goes by the name James Dryden (Sigfrit Steiner). As the two reconnect, it becomes all too apparent to Klaus that the man he envisioned and the life he dreamed of in the west is entirely different from the reality. 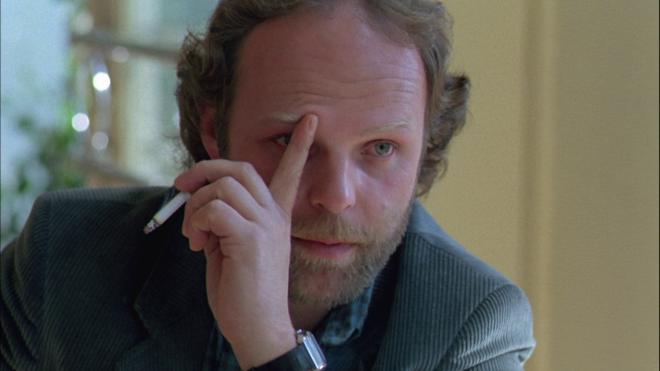 If there is an issue to be had with 'Fatherland' - also known as 'Singing the Blues in Red' - it is that the movie's ideas and themes are so on the nose it's as if they're punching the audience in the face. Klaus has traded one form of oppression for another by moving from a politically dominated world to one that is controlled by the almighty dollar. Klaus has spent his entire life picturing his father as some sort of saintly composer of beautiful music when the fact couldn't be further from the fiction. At its core, 'Fatherland' is an interesting coming of age sort of movie about a man who finally wakes up to the realities of the world, but so much time is spent stating and restating the film's ideas that the final product suffers.

This isn't to say that 'Fatherland' is a bad film necessarily, it's just a bland film. If Ken Loach and his 'Reds' screenwriter Trevor Griffiths had chosen one central idea and stuck with it, the film might have worked better. The entire plot thread of Klaus' work being accepted or finding popularity and therefore not making money for a record studio seems to be a tacked on bit of capitalism finger wagging that if you really break it down doesn't hold water. Sure, his music may not be in style at the moment so he's not a profitable property to the suits counting coins, but that doesn't mean music is the only way he can find financial success. If Klaus' true goal was to have a means to express himself, all he needs to find is a beatnik coffee house and he'd be the headliner for open mic night in a heartbeat.

The real thrust and interesting story of 'Fatherland' is Klaus' search for his missing father. When Klaus is teamed up with Emma (Fabienne Babe) and their search finds them in London, the story finally feels like it's going somewhere. The film really comes together when Klaus and his long lost father meet and the performances from Gerulf Pannach and Sigfrit Steiner light up the screen - only it feels too little too late. So much time is spent expounding on the questionable morals of a free market society that the really good parts of the film are shortchanged.

After recently watching Ken Loach's most recent outing 'Jimmy's Hall,' I've become somewhat confounded by the filmmaker. He seems to be a man with ideas and has a need to express them through film but at the same time, it's hard to get to the root of what he's aiming at. While providing definitive answers to some of the larger political ponderings of the day is a folly unto itself, the lack of a thorough and cohesive point is also detrimental to any work of art - particularly films. While I can't say 'Fatherland' is a terrible movie at any stretch, it also isn't one that I would actively recommend to people either. This was a movie that I desperately wanted to have a point to the story and if there was one, it went past me. 'Fatherland' wasn't good, it wasn't bad, it just was a so-so endeavor.

'Fatherland' arrives on Blu-ray thanks to Twilight Time in a limited run of 3000 copies and is pressed on a Region Free BD50 disc. Housed in a clear case, the disc comes with a booklet featuring photos and an essay by film historian Julie Kirgo.

'Fatherland' arrives on Blu-ray with a pleasing 1080p 1.78:1 image transfer. The film has an intentional softness throughout so some of the finer details aren't quite as apparent as they normally could be, but there is still a pleasing level of detail to be appreciated. Film grain is maintained and there doesn't appear to be any evidence of any kind of DNR or smoothing effect applied. Colors are also muted and a tad drab, but considering the context of the film they work well in service of the story, there just isn't much in the way of primary pop. Flesh tones look healthy and accurate, perhaps a bit pink at times but nothing to severe. Black levels are strong and look the best during daylight sequences. When Klaus is performing in hazy smoke-filled nightclubs the image becomes a bit flatter and looses the inky richness of previous scenes. The film print is in spectacular shape if there were any scratches or damage to be seen I didn't notice it. All around this is a pretty solid looking transfer.

'Fatherland' arrives with a pleasing DTS-HD MA 2.0 audio track. The film is in both English and German and the dialogue comes through perfectly. For those whose German isn't up to snuff, there are burned-in English subtitles that do a solid job translating what is being said. Imaging is a tad restrained, a lot of the heavier scenes with a lot of extra background activity can sound a bit canned. Some of the better moments like the opening press conference or when Klaus performs his music to an audience provide a sense of atmosphere and space. Levels are well balanced and the track keeps to the midranges. Without any age-related issues of note, this is a clean and beautiful audio track that serves the film wonderfully.

No traditional extra features are present on this disc.

Sometimes a movie can wear its message on its sleeve. 'Fatherland' has two themes at play and unfortunately, they don't really come together in a way that serves the movie's main story about a musician trying to find success in the industry and reconnect with his estranged father. It's a well-shot film and well acted, but there are some notable plot issues that kept this film from moving forward in a meaningful way. Twilight Time has brought this film to Blu-ray with a strong A/V presentation and little else. The only extra feature is an isolated score and effects track. Unless you're an established fan of the film, consider this Blu-ray release of 'Fatherland' as a rental. A blind buy would be a tall order.