Miranda (Academy Award nominee Rosamund Pike, Gone Girl) is a dedicated nurse, an exquisite cake maker and an impeccable friend. But when she agrees to a blind date and the wrong man comes to her door…her perfect world is shattered by a brutal assault. Even after her attacker, William (Shiloh Fernandez, Evil Dead), is convicted and locked away for the crime, Miranda can't overcome the fear and trauma enough to put her orderly life back together. Desperate for closure, she reaches out to William – first through letters, then prison visits – and slowly builds a relationship with him. But when William is paroled and comes looking for her, Miranda seizes the opportunity to exact revenge.

Revenge may well be a dish that is best served cold, but that doesn't discount the fact that there needs to be a certain amount of preparation put into creating a fulfilling final meal for your adversary. For starters, as the victim, there needs to be an acknowledgement of wrongdoing on the part of the person targeted for said revenge. Secondly, there needs to be a sense of recovery, the victim must take ownership of their pain and use it to focus on their goals. Third, once the victim has owned their pain, they need to begin preparing their dish of revenge. Like a heist film, the audience needs to see some of the planning, ingredients being mixed without revealing the final dish until it's being served. 'Return To Sender' is a Revenge/Thriller that gets part of the recipe right but forgets some key ingredients ultimately creating an unsavory and tasteless thriller.

Miranda Wells (Rosamund Pike) is a nurse working at a hospital in a small town. She's amazingly good at her job, to the point that she is about to be transferred to becoming a surgeon's assistant given her prompt manner and her steady hands. The trouble is Miranda is a bit of an off individual. She's incredibly OCD to the point she can't use pens provided at a dry cleaner shop. Miranda also has a hard time dating as she's so awkward that she often fails to pick up on social cues partly because of her troubled relationship with her father Mitchell (Nick Nolte). But while she's packing up her house to move, everything is about to change as she's due to go on a blind date with a guy she's heard a lot about from one of her coworkers. Little does she know that the wrong man comes knocking at her door.

When William Finn (Shiloh Fernandez) shows up at Miranda's doorstep, he's hardly cutting a dashing jib for a guy who is supposed to be on a blind date, but he has a charming smile so Miranda lets him inside. It doesn't take Miranda long to figure out that William is not "Kevin" - the man she's waiting to show up - and asks him to leave. Only William won't leave, and doesn't until after he's savagely beaten Miranda and raped her. During the police interview, Miranda remembers where she saw him so it doesn't take justice long to catch up to William and put him behind bars. While justice has been done in the eyes of the law, Miranda can't put her life back together.

Miranda's hand now shakes uncontrollably ruining her chances at the new job. Her house won't sell because of the horrible crime that had been committed there. About the only thing that is going Miranda's way is her father has become far more attentive and helpful - except for his dog who barks at Miranda every time she takes a step. In order to get a hold of her situation, Miranda begins an unorthodox correspondence with William from prison. It isn't long before she comes to see him on visitation days. As their relationship starts to bloom, William learns that he's up for early parole. While Miranda needed to see William in order to get a grasp on the life she lost, she doesn't need him coming around to her house. Miranda will have to take certain steps to ensure that William is never in the position to harm her, or any other woman ever again. 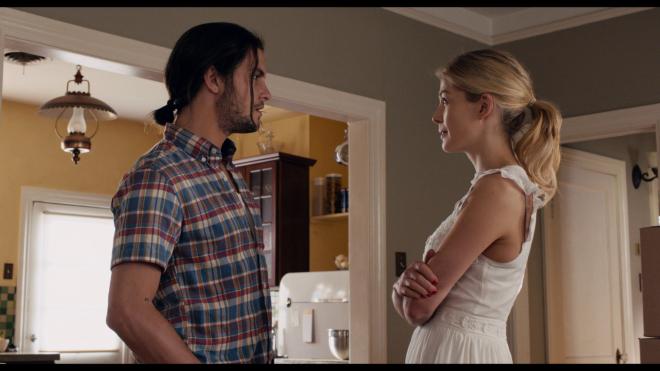 'Return to Sender' is a film whose motivations completely elude me. Written by Patrica Beauchamp and Joe Gossett and directed by Fouad Mikati, 'Return to Sender' has an incredibly difficult time with it's primary character of Miranda. On one hand, the film seeks to portray her as a strong woman who puts her life back together after a great tragedy and seeks a bit or revenge. But at the same time, because we don't see her grand designs for vengeance, her actions become cruel and actually shift her character as a victim into becoming a villain we feel nothing for. Rosamund Pike, Nick Nolte, and Shiloh Fernandez do what they can with what they're given, but the only one that comes through as a likable character is Nolte who does what the can to bring some weight and balance to the feature, but this script sadly shortchanges his involvement.

From the outset, the idea of Miranda going out of her way to see William again may seem unorthodox, but not entirely unheard of. Neither is their pseudo-relationship that they build up through a sheet of prison glass. If 'Return To Sender' had been just a straight drama about a woman getting her strength back after a tragedy, this would be fine, as a setup for revenge, it's a bit slow and tedious since Miranda's designs for revenge don't come in until later into the movie. It isn't until after she hears that William will be getting out of prison that the very idea of revenge even enters her mind. And by that point, she's already slowly poisoned her father's dog to death for no other reason than it barked at her.

It's around this point that Miranda as a victim becomes an unforgiving villain, and one you can't exactly empathize with. By the time Miranda puts her plan into motion, there is only about ten or fifteen minutes of film left. We don't get to see or enjoy her scheme come together, it just sort of happens. Neither do we get to enjoy the extreme measures she's gone to to ensure that William wishes that he'd never laid eyes on Miranda in the first place. The primary problem is that this film is essentially a revenge exploitation flick in the vein of the original 'Last House on the Left' or 'I Spit On Your Grave' only it tries to stand on higher, more affluent legs. 'Return To Sender' is a movie posing as a drama while pretending not to be what it is, a cheap piece of exploitation filmmaking. Had it embraced its roots, this could have been something horrifically grand and satisfying. In the end, 'Return To Sender' isn't a cinematic package I'd want to mail to anyone.

'Return To Sender' arrives on Blu-ray thanks to Image Entertainment and is a Best Buy Exclusive until December 1. Pressed on a Region A locked BD25 disc, the disc is housed in a standard case with identical slipcover. The disc opens to a static main menu with traditional navigation features.

'Return To Sender' earns strong marks for its stellar 1.85:1 1080p presentation. Shot digitally, detail levels are absolutely magnificent throughout the film without any scenes of softness or picture quality anomalies. From close-up facial features to mediums to the finer details of Miranda's house all come through with crystal clarity. Colors are bright and vivid with plenty of primary pop throughout as well as strong and accurate flesh tones. Black levels are rock solid and inky without any crush issues to speak of leading to an impressive three-dimensional feel. For what was apparently a low-budget shoot, the film looks amazing on Blu-ray and since banding or other compression anomalies aren't apparent, this is a great image.

'Return To Sender' arrives with a strong English DTS-HD MA 5.1 audio track. Dialogue is clean and easily heard throughout and keeps to the front/center channels. The film's score by Daniel Hart, dialogue, and the sound effects have plenty of space and atmosphere around them giving the individual elements a pleasing resonance. Levels are well balanced as the film is mostly conversational, there aren't any real sudden volume shifts to account for, nor should you have to have your thumb on the volume button. My only real complaint to the track is that the surrounds aren't really necessary. Other than a few scenes in Miranda's hospital or while William is in prison are the surrounds ever engaged making this track a mostly center/stereo affair. It's still very strong and compliments the film nicely, it's just not the most engaging track ever.

No supplemental material has been included on this disc.

'Return To Sender' is a film that should have just embraced what it was and gone for gold. It's an exploitation revenge/horror film that parades around as a Lifetime Channel drama-of-the-week. The setup is there for a good film, but this cast is wasted on a subpar effort. With a beautiful image and a serviceable audio track, Image Entertainment has done a decent job putting this disc together, but the lack of any extra features at all, as well as my dislike for the movie itself, lead me to call this one as a rental only.

Sale Price 12.99
List Price 29.97
Buy Now
3rd Party 2.46
In Stock.
See what people are saying about this story or others
See Comments in Forum
Previous Next
Pre-Orders
Tomorrow's latest releases