Susan Cooper is an unassuming deskbound CIA analyst and the unsung hero behind the Agency's most dangerous missions. But when her partner falls off the grid and another top agent is compromised, she volunteers to go deep undercover to infiltrate the world of a deadly arms dealer, and prevent a global disaster.

If you've ever wondered how it is that the super-secret agents of movies — the James Bond types — are always proficient at eliminating a host of henchmen barreling around the corner while skillfully hatching a last-minute escape plan without breaking a sweat or the slightest injury, 'Spy' aims to blow the lid offf that cinematic trope. It turns out the archetypal hero has been cheating with the help of a friendly, near-omniscient voice in his ear guiding him out of harm's way at every turn. In the opening moments, we're introduced to Bradley Fine (Jude Law), the stereotypical suave and sophisticated agent, except with allergies that accidentally cause the inadvertent death of an arms dealer who knows the location of a suitcase nuke. As he makes his getaway, conveniently dodging every punch and bullet with acrobatic grace, we meet desk-bound analyst Susan Cooper (Melissa McCarthy) watching events unfold from a computer screen and guiding her partner to the quickest exit.

It's a hysterically sensational start to the latest action-comedy from Paul Feig ('Bridesmaids,' 'The Heat'), brilliantly establishing the relationship between the two characters without losing a beat during the many fistfights, gunshots and explosions. On his return, Fine treats Cooper to a meal at a high-class restaurant and rewards her efforts with the world's ugliest necklace on an adjustable string: a plastic cupcake with a goofy-looking face. He may be handsome and refined in the field, but at home, he's completely oblivious to Cooper's many Freudian-slips revealing her schoolyard crush and carelessly makes comments that seem patronizing. Sadly, his empty praise and supposed gifts of appreciation only confirm Cooper's belief she could never amount to much else, working at a seemingly dead-end position in a rat-infested basement at CIA headquarters. Those are not chocolate sprinkles on the office birthday cakes!

As he did with his two previous summer hits, both of which co-starred McCarthy, Feig does a bit of genre-bending and formula retooling. First, it was the raunchy comedy that proved the girls can get just as dirty as the boys and have a blast while doing it. Soon after, he dismantled the buddy-cop blueprint and reassembled it with far better success than more recent doldrums 'Ride Along,' the atrocious 'Let's Be Cops' and the embarrassingly bad 'R.I.P.D.' For 'Spy,' Feig goes deep undercover to expose the ongoings of the typical espionage flick, and McCarthy, serving as his comedic muse, is game for the chance not only for assuming the role of a covert agent, but also the opportunity to headline an actioner of her own, reuniting with Feig for the third time. McCarthy has more than proven herself a terrific actress that can stand toe-to-toe with better established A-listers, even stealing the spotlight on several occasions. And here, she's an awesome screen presence, delivering one uproarious gag after another. 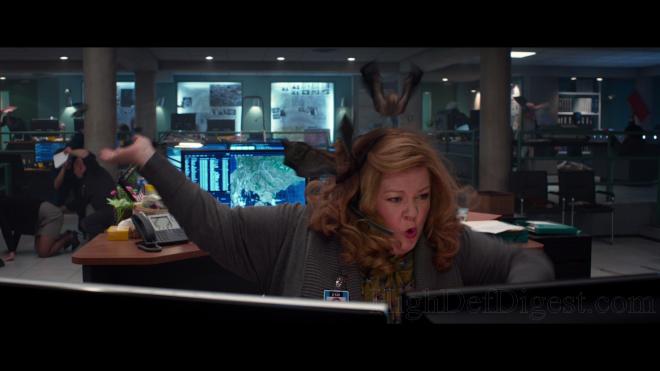 Of course, Feig doesn't send McCarthy out alone on her first solo mission to retrieve the nuclear device. Along with Law, who is funny but still his usual debonair self, Rose Byrne enters the spy game as the daughter of the aforementioned killed arms dealer, Rayna Boyanov, who may know the last known location of the nuke. And this is probably where the movie is at its best, the rapport of the two actresses and their endless belittling insults of each other. McCarthy is essentially given free rein to improv most of her lines, slinging shockingly scathing but still hilarious remarks faster than bullets, and some of the more memorable moments are with Byrne and her head of security Anton (Björn Gustafsson). Jason Stratham joins the fun as the disgruntled but famously mediocre agent Rick Ford and frankly, this is probably one of his performances in some time with ridiculously embellished lines about his toughness. Miranda Hart is also fantastic as Susan's blundering but overly enthusiastic best friend Nancy.

On the surface, Paul Feig's 'Spy' runs its course like a typical spoof of the espionage flick, all the intrigue, glamor and action battered with a thick layer of goofiness, slapstick and several witty jabs at the formula. But as in previous Feig-McCarthy productions, there is also a sense of transcending the usual trappings of being seen only as parody. And what I'm not simply referring to the fact that McCarthy takes charge as the 007 archetype. At its heart, this still a story of a women believing she is just as good as any of the boys, an underdog tale of discovering her true potential, even when her official cover is that of a cat lady or a Midwestern single mother of four kids. She may not be as sophisticated, charming or seem dangerous, but she can still kick butt and take down her target without fail, which in this instance is essentially the standard Bond girl turned criminal mastermind thanks to Byrne's outstanding performance. 'Spy' rightfully goes down as one of the year's best surprises as well as one of the funniest comedies come to along in quite some time. 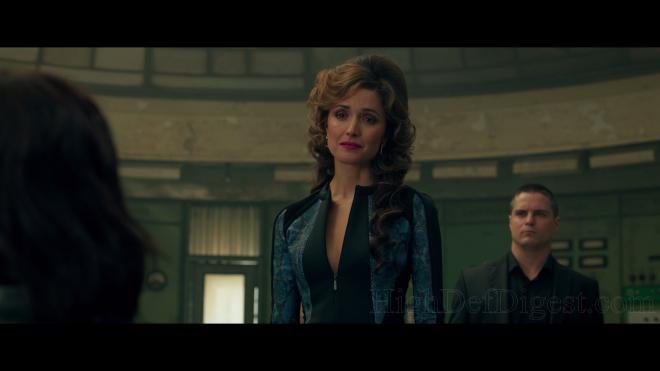 20th Century Fox Home Entertainment brings 'Spy' to Blu-ray on a Region Free, BD50 disc. The package includes both the 120-minute theatrical cut and an extended unrated version clocking in at 130 minutes with more improv gags, a couple new sequences and a few alternate scenes. Housed inside a blue eco-cutout case with a glossy slipcover and a flyer for a Digital HD copy, the disc commences with a few skippable trailers. Afterwards, viewers are taken to a screen with full-motion clips, music and generic menu options.

Top secret agent Susan Cooper kills it on Blu-ray with a highly-detailed and beautiful 1080p/AVC MPEG-4 encode that will have arms dealers everywhere scrambling for cover. Shot on digital HD cameras, the photography of Robert D. Yeoman ('The Grand Budapest Hotel') is stunning with several dramatically striking moments that make the European locales look like something straight out of a travelogue.

The stitching and threading around clothes are distinct, revealing the tiniest fiber in the fabric or the fine lines in the hilariously bad outfits worn by McCarthy. Every imperfection and flaw on the buildings, like paint flakes or small indentations, are plain to see while discrete bricks can practically be counted. Hairs, from McCarthy and Byrne's silly hairdos to the five o'clock stubble on Law and Stratham's faces, are razor-sharp, and facial complexions reveal negligible blemishes and pores with lifelike textures.

The 2.40:1 image also comes with spot-on, perfectly balanced contrast, exposing every diminutive object in the background and in the far distance. Primaries are cleanly rendered and dramatic throughout while secondary hues are full-bodied, giving the presentation a contagiously energetic feel. Black levels are inky rich and opulent with excellent penetrating shadows that don't ruin the finest details in the clothing.

Cooper is armed and dangerous with an excellent DTS-HD Master Audio soundtrack, but sadly, she hilariously blows her cover repeatedly throughout the runtime, revealing a few minor, perhaps negligible, weaknesses within her particular set of skills. For one, it would have been nice if the agency had equipped her for her first solo mission with the Dolby Atmos track heard in theaters. But, in all honesty, the lack of that feature is more a matter of personal taste, not in a fault of the audio.

Still, one can only imagine what the action-comedy would have sounded like with a bit more rear activity. Don't get me wrong, the surrounds are employed on occasion with very subtle atmospherics, nicely expanding the soundfield in a few admirable spots. However, for a majority of the time, there is very little going on in the back of the room, even during the many action sequences, which is when it's the most apparent. Although chirping birds and rustling leaves can be heard during exterior sequences, the sound effects are infrequent and sporadic, making several European locales notably absent of life.

Much of the heavy-lifting is assigned to the front three channels, which is where the lossless mix can be considered a successful mission. The front-heavy presentation is ultimately what brings Paris, Italy and Hungary to life with the hectic sounds of city traffic and the commotion of people going about their daily lives. Discrete effects, particularly during action sequences, pan effortlessly from one side of the screen to the other while maintaining a clean, crisp mid-range that provides detailed clarity in the loudest moments, and dialogue is precise and well-prioritized, keeping the side-splitting improvised jokes perfectly audible at all times. Unfortunately, one other minor drawback is the low-end not quite delivering a bit more of an impact during explosions or gunshots. On the other hand, the bass still comes with just enough of a punch for the listener to enjoy those same moments without complaint (bass chart).

On a side note, the flick is not CIH friendly.

Writer and director Paul Feig reunites with the hilarious Melissa McCarthy for a third time in 'Spy,' a hysterically awesome spoof of the espionage formula, ranking as one of the funniest movies not only of the year but in quite some time. The Blu-ray arrives with excellent picture quality and a great lossless mix to match. A treasure trove of entertaining supplements makes the overall package recommended.

Sale Price 33.88
Buy Now
3rd Party 3.73
In Stock.
See what people are saying about this story or others
See Comments in Forum
Previous Next
Pre-Orders
Tomorrow's latest releases