At the height of his career, Alexandre decides to set off for Italy with the idea of completing of a book on Borromini. Along with his wife Alienor feels her relationship with Alexandre is gradually slipping away. Along the way they meet siblings Goffredo and Lavinia. Gofffredo is about to embark in architectural studies. A story of rediscover the joys of life and overcoming anxiety.

When a filmmaker approaches a story with a clear theme in mind, the results tend to work in the film's favor. By not being obtuse about a topic it allows the film to just be and let the story progress in a way that makes sense without betraying the central premise. On the other side of the coin, a filmmaker can almost be entirely too direct with a film's central idea to the point that the characters and story suffer as they repeatedly cover the same thematic ground as previous scenes. Director Eugéne Green's 'La Sapienza' starring Fabrizio Rongione and Christelle Prot is the sort of film where the visuals are absolutely splendid but the characters are emotionally flat as they're too busy stating and restating the film's ideas about people's relationship with each other, their surroundings, and technology.

For famed French Architect Alexandre Schmidt (Fabrizio Rongione), his career is at its peak. He's built factories all over Europe but feels creatively empty inside, even after winning an award for his contributions to modern architecture. After his latest project receives a series of demanding changes to the plans, Fabrizio is ready to throw in the towel and return to his dream of writing a book about Baroque era architect Borromini. For Alexander's wife Aliénor (Christelle Prot) this is welcoming news as their marriage has been strained to the point where they will go entire meals without speaking to one another.

As Alexander and Aliénor make their way to Italy, they spend their time looking at and appreciating the amazing works of Borromini. From the impressive cathedrals to the humble place of his birth, Alexander and Aliénor seemingly aimlessly wonder throughout Rome together looking for that spark that may reinvigorate their lives. When a chance encounter introduces them to siblings Goffredo (Ludovico Succio) and his ill sister Lavinia (Arianna Nastro) things begin to move in the right direction for the Schmidts. Goffredo is an architecture student and affords Alexander the opportunity to reconnect with the youthful vigor he once had for his profession. In Lavinia, Aliénor sees an opportunity to be a sort of surrogate mother helping the young girl deal with her rare nervous disorder.

It isn't long before Goffredo and Lavinia have decided to join Alexander and Aliénor on their travels. As the party travels throughout Italy, each of them will come face to face with their own sense of reality and the world around them. For Alexander and Aliénor, this personal journey will have ramifications that extend beyond their professional lives and will have a deep impact on their relationship as well as the place they occupy in the world.

'La Sapienza' is a beautifully frustrating sort of film. Visually, this film is an absolute masterpiece. From the intricate symmetrical framing to the lush and vivid shots of Rome's beautiful architecture, this movie is a feast for the eyes. However, at the same time it can also become increasingly uncomfortable with its visuals - specifically with the characters. Conversations are had using extreme close-ups with the actors staring straight at the camera out to the audience. At first this is an interesting effect but after a time it grows to be more and more uncomfortable. Conversations also have a detached, inauthentic feel to them as actors speaking to each other often won't be looking at one another, and then the pacing of conversations feels like it has a one to two second lapse before the other person will respond to a statement or question. 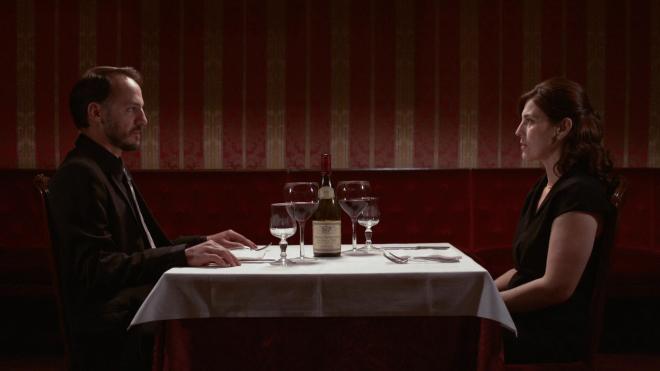 Director Eugéne Green seems to be making a statement about the lack of personable human interaction in an age of technology where people are more interested in avarice than appreciating the beauty around them. The prolonged camera holds on a unique architectural feature supports that idea, but at the same time when the film is also trying to make a statement about the lack of personal human interactions, the importance of its messages becomes muddled. When we're not hearing about beauty in our surroundings we see a random person breaking up with someone over their cell phones followed by a judgmental look from one of the characters out to us the audience.

While I can certainly understand and even condone the films lapses into some societal finger wagging, I can't get behind the bland characterizations we have to follow. Their interactions are so hollow and stilted, and with the frequent close-up photography of their faces, the film just becomes awkward. I've never been someone who had a problem with looking people in the eye, but this movie frequently made me want to look away. It's an odd experience to have a film look at you like there's something wrong with you. Or at least that was my experience with 'La Sapienza.' I'm sure others may find a different experience with it that would run counter to my own, but at the same time this is a tough film to recommend for any other reason than to appreciate the beautiful architecture photography.

'La Sapienza' arrives on Blu-ray from Kino Lorber and is pressed on a Region A locked BD50 disc. Housed in a standard case with a booklet featuring an essay by critic Nick Pinkerton.

'La Sapienza' features a shockingly realistic looking 1.78:1 1080p image. Truly, the image clarity and detail level is so real-to-life, that often times it can look like the actors are in the room with you. This intense level of image clarity is part of my criticism of the awkward close-ups of the cast. With that out of the way, colors are absolutely gorgeous. Primaries have a lovely pop to them and blues and reds look like they're ready to leap off the screen. Black levels are also rich and inky leading to an outstanding sense of three-dimensional depth. As I mentioned already detail levels are striking and allow you to appreciate the look of a particular cast member, but most importantly you're allowed to fully appreciate the intricate architecture throughout the film. It's a very impressive transfer that is virtually flawless.

'La Sapienza' also makes incredible use of its DTS-HD MA 5.1 audio mix. This mix may seem a tad odd at first since this is such a dialogue-heavy film, but the uses of the surround channels are extremely subtle but very effective. Gusts of wind, the small atmospherics that come from a quiet cathedral, and the small sounds of everyday life round out the mix in a very effective way. Dialogue is crisp and clear and almost never moves away from the center channels due to the film's framing technique, more often than not, the speaking character is talking directly at you. It may not be the most dynamic mix in recorded history, but it's impressive to say the least.

Le Signes: (SD 32:37) This is a short film from Director Green, it's a decent little work in its own right and more or less works as a showcase of what he brought to 'La Sapienza.'

Interview: (HD 12:51) Director Eugene Green more or less solves the big mystery surrounding the cast's interactions with one another as he evidently told them to actively pretend like the other person wasn't in the room with them. It's an interesting interview that should have been longer when you consider all of the other artistic choices the man brought to the production. I would have loved for him to discuss the meaning behind his symmetrical framing techniques.

Trailer: (HD 1:43) A quick but effective introduction for the film and what one can expect from the main feature.

'La Sapienza' is a success in an artistic sense. It's beautifully framed and the photography is immaculate. As a movie, it's not very entertaining and it can actually feel very awkward watching it. A hard one to recommend to general audiences so this one is most definitely for the curious minded. Kino Lorber has done an incredible job putting together this disc featuring a flawless A/V presentation although the extras are a bit lacking as some more informative material would have been great to see. Taken as a whole I'm left to call this one as a rental. I just don't see too many people going out of their way to see this one and the ones that do may not enjoy the experience.

Sale Price 22.99
Buy Now
3rd Party 22.24
In Stock.
See what people are saying about this story or others
See Comments in Forum
Previous Next
Pre-Orders
Tomorrow's latest releases