Angela Holmes is an ordinary 27-year-old until she begins to have a devastating effect on anyone close, causing serious injury and death. Holmes is examined and possession is suspected, but when the Vatican is called upon to exorcise the demon, the possession proves to be an ancient satanic force more powerful than ever imagined. It's all up to Father Lozano to wage war for more than just Angela's soul, but for the world as we know it.

There's really no point in even praying for the gentlest way of explaining how much 'The Vatican Tapes' sucks. It just does. If ever there were a need for a horror movie that also functions as a sedative, something to have as background noise while slowly dozing off to dreamland, then this scare-less snoozefest is the perfect medicine for combating those sleepless nights. The entire production fails in almost every respect, falling flat in building chills and misfiring with each attempt at scaring audiences, which is really nothing more than the same old tired trick of unexpected noises. The story, from Chris Morgan ('Wanted,' 'Furious 7') and Christopher Borrelli, about a young woman possessed by an evil demon — as if there were any other kind — does little in trying to engage viewers and fizzles out just as quickly as it begins. The plot relies too much on the usual tropes of good, faithful people terrorized by evil forces for no good reason, except that same woman Angela (Olivia Taylor Dudley) is living in sin with her boyfriend and apparently collects satanic images on her computer for some unexplained reason.

Coming from the same imagination that bombarded moviegoers with mind-numbing brainlessness in 'Crank,' its sequel and 'Ghost Rider: Spirit of Vengeance,' director Mark Neveldine does absolutely nothing in elevating this monotony from the hole it immediately buries itself in. The movie opens with televised interviews of two Vatican exorcists (Djimon Hounsou and Peter Andersson) talking ominously about the worldwide rise of evil activity, not so inconspicuously hinting at the coming of the antichrist. Then, we are promptly whisked away to Rome where Hounsou and Andersson basically remind viewers once more of everything we just saw during the opening credits and watch a video of Angela and her uninvited companion. The whole thing smells of low-budget ineffectualness followed by slap-in-the-face exposition. It's not certain if it's done in all seriousness because I was tempted to bust out laughing at how clumsily bad it all turned out. And that wasn't the only time I found myself giggling at scenes that were downright silly, such as when Angela bewitches other mental patients into a rioting frenzy. 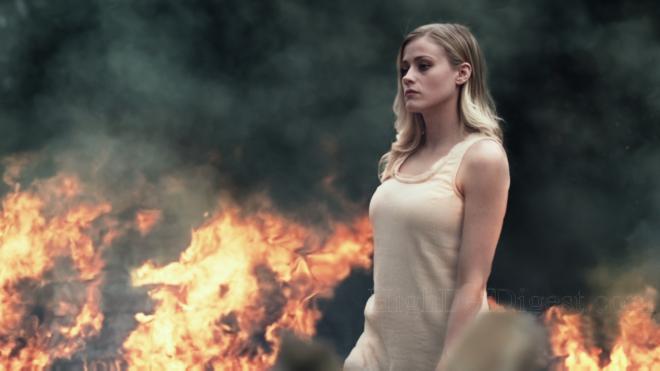 Although Neveldine shows some competency filming action sequences, he clearly demonstrates his unfamiliarity and a lack of talent for the horror genre as a whole. Either he's never watched a demonic possession movie in his life or he sat through a marathon of those released in the last fifteen years. 'The Vatican Tapes' amounts to nothing more than a patchwork mess of every cliché imaginable, from a body contorting and twisting accompanied by the nerve-wracking sounds of bones braking to a pair of dogmatic priests — one older, wiser and more experienced while the other a dumbfounded novice. Other than Hounsou, it's surprising to see Michael Peña as Father Oscar Lozano partaking in this cock-up, spending a majority of his screentime befriending Angela's father (Dougray Scott) and reacting gobsmacked at the devil's handywork. Other times, particularly in the second half when partnered with Andersson, Peña has a confused look on his face, almost as though he was skeptical of his involvement with the production. Or, perhaps, it's a face of genuine concern the antichrist is a more credible threat to his career than the world.

In the end, of all the victims in 'The Vatican Tapes,' the saddest casualty has to be Angela's live-in boyfriend, Pete (John Patrick Amedori). For the first quarter of the movie, the poor kid is made to endure disapproving glares and humiliating insults mumbled by Scott beneath his breath. Sometimes, dear ole dad simply blurts out the put downs in front of Angela while a helpless Amedori hilariously looks on like some puppy being disciplined. And we're never sure if he's injured by the name-calling or surprised Angela never makes the slightest effort to defend him. Rubbing salt into the gaping wounds is his girlfriend becoming the chosen vessel for bringing about the end of times. And if that weren't enough, he's put down once more by the priest for his lack of faith, despite the fact he's about to become the converted after surviving this experience. There is simply no winning for poor Pete, and we should all fall on our knees to pray the hapless kid has better luck in the afterlife. (Wait! Is this supposed to be a horror flick or some deviously clever comedy?) Maybe, we should pray to exorcise the movie from our memories.

Lionsgate Home Entertainment brings 'The Vatican Tapes' to Blu-ray on a Region A locked, BD25 disc housed inside a blue, eco-cutout case with a glossy slipcover and a code for an UltraViolet Digital Copy. At startup, the disc commences with a series of skippable trailers before switching to an interactive menu screen with music playing in the background.

The supernatural thriller takes possession of Blu-ray with an excellent 1080p/AVC MPEG-4 encode that impresses on several occasions but also lacks texture and style. This is largely due to the movie being shot entirely on high-def cameras, arriving with the sort of sterilized digital quality that's frankly unappealing and ultimately makes the entire production look cheap.

On the other hand, the 1.78:1 image is consistently razor-sharp, revealing the tiniest object in the background with distinct clarity. Individual hairs are natural and very well-defined, from the fabric fuzz of the priest outfits to the faint peach fuzz on the faces of the female cast. Speaking of which, facial complexions are arguably the most impressive aspect of the freshly-minted transfer. With outstanding lifelike textures throughout, viewers can plainly make out every pore while the most trifling wrinkle and negligible blemish is exposed. Contrast is spot-on with clean, crisp whites while black levels are mostly true and accurate, although low-lit interiors lose some of their luster and tend to look pretty flat. Much of the palette is not very bright either, which might a deliberate look since primaries remain full-bodied and cleanly rendered.

The frights continue — or rather, don't — with an equally excellent DTS-HD Master Audio soundtrack that while good and enjoyable, largely fails to generate a creepy, suspenseful vibe. That fact sadly adds to the movie's overall drabness and only succeeds in making it that much more difficult to continue watching.

The entire presentation is really more of a front-heavy mix, which is rather unusual considering the genre and subject matter. Yet, the soundstage is littered with a variety of off-screen activity, showing great channel separation and movement across the screen. Admittedly, this provides the movie with a pleasing sense of presence, exhibiting clean, distinct clarity in the mid-range while dialogue remains well-prioritized and intelligible. However, when things are meant to suddenly grow weird and scary, the surrounds are noticeably and oddly silent. A few atmospherics move to the rears, lightly expanding the soundfield, but overall, the design doesn't really build on the chills or make for a spooky environment.

Instead, Joseph Bishara's musical score does most of the heavy lifting, displaying clean, dynamic instrumentation and by bleeding into all the other speakers. Not only is this the strongest aspect of the lossless mix, but it succeeds in generating a wider and more engaging design. Meanwhile, low-frequency effects are weighty and responsive, occasionally digging into the lower octaves and making a couple moments decently ominous (bass chart).

Simply put, 'The Vatican Tapes' is a terrible melodrama in the guise of a supernatural horror movie. From the same mind that brought us the 'Crank' movies, director Mark Neveldine demonstrate a lack of talent and unfamiliarity with the genre, banking on the most overused tropes and conventions for producing scares. But in the end, the movie only succeeds in lulling audiences to sleep or praying for the time wasted to be miraculously restored. With a small collection of supplements, the Blu-ray arrives with an excellent audio and video presentation that makes the production barely tolerable. On the whole, the package would fall in the bad flick, good disc, category, but frankly, it's best to avoid the movie altogether.