The People That Time Forgot

When an expedition in search of a lost colleague traces his last steps in the frozen Arctic, the team discovers a hidden tropical oasis in the middle of the ice! As things quickly thaw out, clothes come off and long forgotten cavemen - and dinosaurs - come a-hunting for fresh meat. Soon, prehistoric hysteria sets in and it's every man - and scantily clad woman - for himself.

Adventure? Excitement? A Jedi may crave not these things, but when you're a small boy growing up in rural South East Michigan in the 1980s without access to cable TV, you took what you could get. I grew up watching action and adventure flicks with my dad that we rented from a local Mom and Pop operation. Westerns, Sci-fi, and action movies were our cinematic diet. While we did enjoy prime cuts of rare meat like 'Raiders of the Lost Ark,' we also settled for our cheap cuts of flank like 'Firewalker' or 'Allan Quatermain and the Lost City of Gold.' We were adventure junkies and whenever we needed a new fix, we'd often have to settle for what we could get. I offer this as a bit of background information before I explain why I enjoyed 1977's 'The People That Time Forgot' directed by Kevin Connor and starring Patrick Wayne, Sarah Douglas, and Doug McClure. I expected this flick to be cheesy, and it is that, but it was also incredibly entertaining.

After Bowen Tyler (Doug McClure) has gone missing on the infamous and fantastical island of Caprona located somewhere around the icy expanses of Antarctica, it's up to his friend and famed air-fighting ace Ben McBride (Patrick Wayne) to mount a rescue mission. Funded by a newspaper magnate, Ben is accompanied by the brilliant Doctor Norfolk (Thorley Walters), his brilliant and handy mechanic Hogan (Shane Rimmer), and the headstrong female reporter Charly Cunningham (Sarah Douglas). While flying over the island searching for his lost friend, Ben's aircraft is attacked by a gigantic pterodactyl and crash lands deep within the amazing island of Caprona.

Cut off from their ship and any means of escape, Ben, Norfolk, Charly, and Hogan are going to have to find someway to repair their airplane and locate Bowen. When they encounter the beautiful English-speaking cavewoman Ajor (Dana Gillespie), they soon learn that Bowen has had an incredible influence on the local peoples. If an island filled with gigantic dinosaurs wasn't problematic enough, Ben and his companions will have to face a tribe of savages and a race of vicious headhunters known as the Nargas lead by the cruel Chung-Sha (John Hallam). With their own lives at risk and no way to get off the island, Ben and his company of explorers are going to have to use every skill they have in order to survive and rescue Bowen. 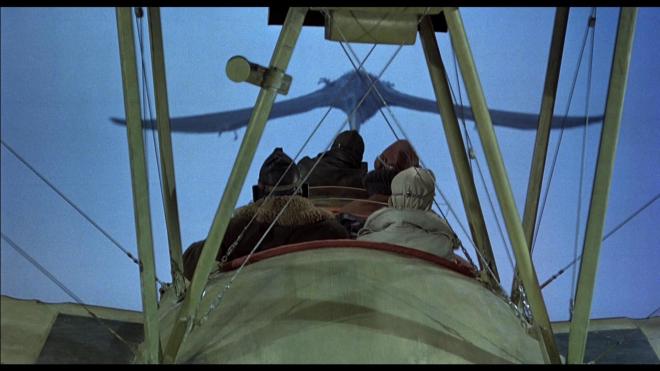 I honestly don't know how my dad and I missed watching 'The People That Time Forgot.' This is the sort of movie that would have been in our wheelhouse when we needed a not-so-serious adventure movie on a rainy afternoon. It's got goofy miniature models, gigantic rear-projected dinosaurs, a brave hero, a brash lady companion, sexy cavewoman, and a grotesque evil villain all rolled into one film! What more could you ask for out of a piece of late 70s escapist entertainment? 'The People That Time Forgot' shouldn't be viewed through the lens of a big-budget adventure movie. It very much has the look and feel of a better than average B-movie from the 1950s with an innocent exuberance about its content, even in the face of rampant cultural insensitivity and sexism.

At the top of the heap is the always reliable Patrick Wayne - son of John "The Duke" Wayne as Ben McBride. Patrick Wayne is an actor whose relatively mediocre career has always surprised me. Granted he was working under the shadow of his legendary father, but he never made the same movies as dear old dad. Especially when you consider flicks like 'Sinbad and the Eye of the Tiger,' he should have been someone to break out. He's every bit as charismatic and committed to his craft as his father was and he's in great form as Ben McBride. Serving as a solid counterpoint to Wayne's brave hero is Sarah Douglas' Lady Charly. She's a strong-willed independent woman who believes she's an equal to her male counterparts. It's a great bit of character when you consider that the Edgar Rice Burroughs novel was written in 1918. It's also a hoot that she exhibits the exact same hair style that Carrie Fisher sports for 'Star Wars' which was released a scant three months before this film! I guess cinnamon buns were popular in 1977. It's worth noting that this movie also stars 'Star Wars' cast members David Prowse (Darth Vader) and Richard LeParmentier (General Motti). Sadly the pair didn't share any screen time together, but a fun little factoid none the less.

Directed by Kevin Connor from a screenplay by Patrick Tilley, 'The People That Time Forgot' is a smarter, better-produced film than it's predecessor 'The Land That Time Forgot.' It feels like it's tapped into that Edgar Rice Burroughs energy a bit better and really went all out with the visual effects - even if they were just big clay models and toys brought to life with rear projection. There is a delightful silliness to the opening pterodactyl attack that can't be taken seriously, but you also have to love it for its confidence. The filmmakers and the cast really gave it the old college try with 'The People That Time Forgot' and the energy is infectious. By no means is it a perfect movie, it has its faults, especially when the Japanese-inspired Nargas arrive on scene it can be a bit cringeworthy, but, it is still a fun movie that actually does a very good job of keeping to the source material. I had a great time watching this one. I think the key to its enjoyment is allowing yourself to just be a kid again and soak it all in for what it is. If you're going to compare it to all of the great adventure movies that came before or after, it'll stop being fun.

'The People That Time Forgot' arrives on Blu-ray thanks to Kino Lorber. Pressed on a Region A BD50 disc, the disc is housed in a standard Blu-ray case. The disc opens with a static image main menu with selections from the film's score playing and features standard navigation options.

Considering this film is nearly 40 years old and is a very deep catalogue release, my expectations were naturally pretty low, but thankfully this transfer delivers. With a full 1080p 1.85:1 transfer, 'The People That Time Forgot' looks very good with only a few slight flaws to harp on. Honestly, the only visible damage I could spot was some very light speckling during the credits and the opening scenes. Once the main film gets going, it's very easy to see and appreciate the film's impressive production design, costuming, and yes, even the somewhat hilarious model dinosaurs used throughout the movie. Film grain is intact without any signs of DNR leading to some strong detail levels. Colors are bold and present without being too oversaturated allowing primaries to have their pop with stable flesh tones. Black levels are deep and inky with good shadow separation giving the image a nice three-dimensional vibe. All around this is a pretty fantastic transfer. The only negative I can really state is that the improved clarity and dimension betrays some of the effects work but that's not really a fault of the transfer, it just adds to the fun.

'The People That Time Forgot' is given a robust DTS-HD MA 2.0 audio track. Dialogue is front and center allowing the actors to easily be heard as they sputter out some pretty amazing schlocky dialogue as they're attacked by dinosaurs! Sound effects are present and lively. Gun shots, explosions, a big volcano, and the numerous dinosaur screeches all have a strong natural presence. The nice classical adventure score by John Scott rounds out the mix nicely and doesn't intrude too heavily on the dialogue and sound effects. Levels are even without any need to adjust volume, although I do recommend you keep your volume up a little higher than normal just for the fun of it. All around this is a very clean mix without any hiss, distortion or any age-related anomalies to report.

Interview With Sarah Douglas: (HD 20:30) She has a lot of fond memories of the film and talks about the making of the film. It turns out she'd just finished this film and then immediately went onto 'Superman: The Movie.'

Theatrical Trailers: (HD 4:35) This features trailers for 'The People that Time Forgot' as well as 'The Land That Time Forgot' strung together. A simple chapter break is the only way to navigate between the two trailers.

When it comes to movies like 'The People That Time Forgot,' you have to be in the right mood. It's certainly a film that requires you to turn your brain off and just sit back and enjoy but it doesn't insult your intelligence either. I get the feeling that it would be a fun one to introduce the little ones to as this movie certainly aims to be a crowd pleaser. I had a blast with it and am glad to see it given such great treatment with this Blu-ray release from Kino Lorber. The A/V transfer is pretty fantastic when you consider it's a deep catalogue title that's nearly 40 years old as of this writing. This Blu-ray also features a great commentary with Director Kevin Connor and two fantastic interviews with female leads Sarah Douglas and Dana Gillespie. At the end of the day, I'm calling this recommended.

Sale Price 56.99
Buy Now
3rd Party 56.99
In Stock.
See what people are saying about this story or others
See Comments in Forum
Previous Next
Pre-Orders
Tomorrow's latest releases