Sometimes you have to wonder what possessed someone to make a movie. Was it a lifelong ambition? Is it blind arrogance that they think they know the intricacies of visual storytelling and character development and can bring a vision to the screen? Or maybe they're just bored and have a few million extra bucks laying around with nothing left to burn it on? After watching 1971's Captain Apache directed by Alexander Singer and starring Western genre veteran Lee Van Cleef as our titular hero - I'm inclined to believe a combination of those three motives went into creating this strange, disjointed, but still oddly fun psychedelic Western adventure.

Life in the U.S. Calvary can't be very easy for Captain Apache (Lee Van Cleef). As a full-blooded Indian, he faces racism from his white counterparts as well as discrimination from his own people for wearing the blue uniform of the Union. Even with these social troubles, Captain Apache gets the job done and done quickly - whatever that job may be. Acting as a sort of regional detective/sheriff/army guy, Captain Apache finds himself investigating the murder of a man who may have been in the middle of a gigantic conspiracy headed by a rough and tough landowner by the name of Griffin (Stuart Whitman).

As Captain Apache starts to pull at the threads holding the conspiracy together, he unravels an even bigger plot that is supposed to happen on April 4th. What exactly is that plot? No one seems to know much. It could be a plot to rob a reserve bank of its gold. It could well be a plan to grab up as much land as possible. It could even be a plot to kill the President of the United States! As Captain Apache finds one man who may know something about what is going on, that man dies before he can talk. As Griffin is the only other man with anything to risk, Captain Apache finds he must trust him as well as the beautiful Maude (Carroll Baker) if he's going to figure out what is going on.

'Captain Apache' is one of those movies that feels like it was trying to be a psychedelic groovy 60s movie while also being a rough and gritty Spaghetti Western. It is a strange dynamic to be sure. All you have to do is listen to the lyrics of Captain Apache's theme song - that was actually sung by Van Cleef - to get a sense that this is not going to be your traditional Western:

And then the chorus kicks in with: 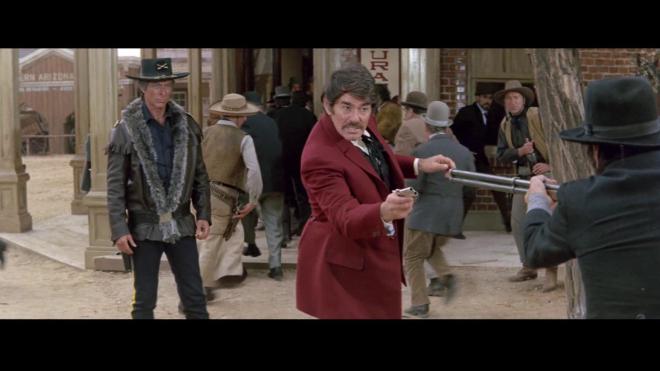 Added to that amazing opening theme is an odd montage of scenes that happen throughout the rest of the movie, so if you've got an eagle eye you can spot what leads up to the film's end right at the very beginning of the movie.

'Captain Apache' taken as a whole is probably not a very good movie. It's not really even a very good Western at that. However, I will say that it is a fascinating storytelling mess. For one thing, the film never really makes any sense. From the way it is edited, to the way characters interact with each other, to the plot as a whole, the film leads to one big question mark after another. It's almost as if someone saw 'El Topo' and thought that was the perfect template to copy and paste into their movie. Where 'El Topo' is a piece of visual expressionism with a thin plot, 'Captain Apache' doesn't seem to have those same artistic ambitions and is just a weird, wild, but incredibly fun movie to watch.

Lee Van Cleef was still a commanding physical presence and it was cool to see him act in a movie this strange. Even more fun is a midpoint moment where he's drugged and is having visions of a murder. It's too strange to describe so you're just going to have to see it for yourself - especially if you've ever wondered what Lee Van Cleef would look like high. Stuart Whitman as Griffin is a good bit of fun, you can tell he's enjoying himself even if the things his character does or says don't make a lick of sense. Then you have the ever wonderful Carroll Baker as Maude. She loves and hates our hero Captain Apache and their dynamic is a good bit of fun to watch, again, even though it makes no sense in the context of the film's atom thin plot.

Did I love 'Captain Apache?' No, I didn't love it. Is it a movie I would recommend to others? Maybe, and then only if I knew their taste and temperament. If I met a stranger who was looking for a good and rare western, I would probably turn them to something like 'Barquero' or 'Man With The Gun' or even the fantastic 'The Quiet Gun.' If I knew the person was into odd movies that didn't rely on tried and true plot and character development moments, I would then recommend 'Captain Apache.' It's just a weird movie and not one I think many average folks out there would make it all the way through.

'Captain Apache' arrives on Blu-ray thanks to Kino Lorber and their Studio Classics line and is pressed on a Region A locked BD25 disc. The disc comes housed in a standard case and opens directly to the main menu.

In spite of some obvious print wear and tear, 'Captain Apache' enjoys a rather strong 2.35:1 1080p transfer. Fine film grain has been retained leading to some impressive and beautiful looking detail levels. From the scenic landscape to the intricate costuming to the rather impressive set design work, the film looks fantastic. Colors have a nice pop to them, especially greens and blues. Reds feel a little tweaked, almost a bit too pale and more pink-looking, but that didn't seem to affect on the flesh tones too noticeably. Black levels are fairly strong with a nice inky richness to them, but there are a couple notable moments of crush where some characters in dark clothing end up looking like floating heads. The only real issue for this film is the print damage, for the most part, it's limited to some mild speckling, but it also looks as though a couple frames are missing here and there, and there is some very noticeable staining that lasts for about 30 seconds during the film's midpoint. While this is far from a flawless presentation for 'Captain Apache,' the film still makes a nice appearance in HD.

Where 'Captain Apache' earns some points is with its impressive English DTS-HD MA 2.0 audio mix. The film has that sort of elaborate "Wall of Sound" feel to it. A number of the elements including much of the dialogue and many sound effects sound as though they were dubbed in post-production giving them that Spaghetti Western vibe but at the same time have a little extra oomph and presence. Dialogue comes through crisp and clean, even when there has been an obvious frame break in the image, the audio doesn't falter. In fact, the only thing I can really knock the audio presentation of 'Captain Apache' for is some persistent age-related hiss. It's never very overpowering or intrusive and is really only noticeable during some of the film's quieter moments. Without any breaks or other issues of note, this track gets the job done.

Sabata Trailer: (HD 1:37) An awesome trailer for a great Western!

Barquero Trailer: (HD 2:36) One hell of a great movie gets an awesome trailer.

'Captain Apache' is probably one of the single strangest Westerns that I have ever seen. It took me a little while to get into it, but once it got rolling, I found the flick to be entertaining. Certainly not for everyone, but fans of cinematic weirdness should find some enjoyment with a viewing of 'Captain Apache.' Kino Lorber has done a decent enough job pulling this Blu-ray together. The A/V presentation is serviceable and gets the job done with only trailers for extras. I'm calling this one as being Worth A Look only because it is such a strange movie that I can see some curious people enjoying it quite a bit.

Sale Price 15.29
List Price 22.95
Buy Now
3rd Party 11.29
In Stock.
See what people are saying about this story or others
See Comments in Forum
Previous Next
Pre-Orders
Tomorrow's latest releases