Dan Merrick comes out from a shattering car accident with amnesia. He finds that he is married to Judith who is trying to help him start his life again. He keeps getting flashbacks about events and places that he can't remember. He meets pet shop owner and part time private detective Gus Klein who is supposedly done some work for him prior to the accident. Klein helps Merrick to find out more about his past and true identity.

After surviving a car accident that put him in a coma and left him horribly disfigured (requiring intensive reconstructive surgery), Dan Merrick awakens to a luxurious world and a comfortable life he has no memory of. Suffering from amnesia, he now has to battle his sanity and violent flashbacks while reconstructing his past and former identity. For the first quarter of 'Shattered,' the 1991 psychological thriller by Wolfgang Petersen in his first American production, moviegoers follow Merrick's arduous journey remembering a marriage, friendships and a career others around him claim he lived. He doesn't really have much choice who to believe or distrust since any recollections of his former self have been effectively erased. But then again, who would argue against or question waking to a plush, opulent lifestyle with a loving, devoted spouse, a magnificent mansion in the San Francisco hills and a satisfying job. And everything does seem like a dream until Merrick discovers clues that will turn it all into a nightmare.

Tom Berenger plays Merrick with an affable, wayward personality, gaining our sympathies with his curiosity and genuine desire to return to his former life. In previous roles, most notably 'Platoon' and 'Major League,' the Academy Award nominated actor is a stony, inflexible adversary who almost always turns out to be more complex than his callous exterior would have us believe. As a wealthy amnesiac worth millions, which we are reminded of a couple times throughout the movie's 98-minute runtime, Berenger exposes his softer, more vulnerable side from the start, but he's also a somewhat gullible man who easily places his trust in those around him, starting with the overly affectionate and seemingly faithful wife, Judith (Greta Scacchi). The picture-perfect dream of a marriage is shattered in a single moment when Merrick discovers photos of the woman he was led to believe was his doting, dutiful wife in bed with another man, a shocking revelation of an affair that appears more passionate and fiery than his own. 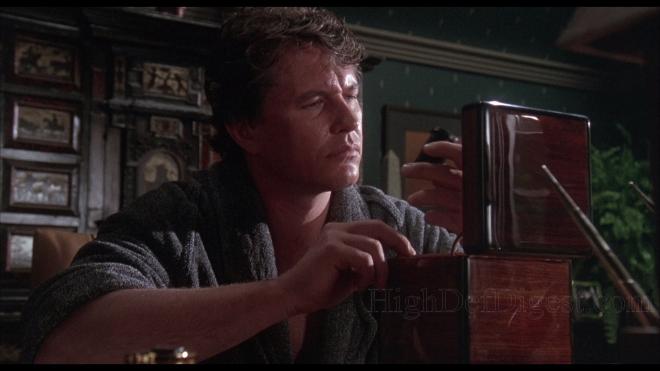 Thus, our protagonist is set on a different journey of uncovering the truth behind his marriage, to learn more about the relationship he is made to accept with a woman who is essentially a stranger to him. The transition from drama to mystery is smoothly handled, as the story, which Peterson adapted from the novel of the same name by Richard Neely, takes its time with Merrick coping with the new found information and allowing other clues to further encourage an inquiry. First, he hears from close friends Jeb and Jennie Scott (Corbin Bernsen and Joanne Whalley) about a sometimes violent marriage that was on the rocks and brink of ending the same night of the car accident. By the time audiences are introduced to a private eye who only works to keep his pet store running and the animals fed, Gus Klein (Bob Hoskins in a terrific and criminally underrated performance), the film shifts one last time into neo-noir territory, revealing that the sham of a marriage is part of larger conspiracy while toying with familiar tropes meant as homage.

This swerve into the noir mystery is arguably to the strength of 'Shattered,' the reason for its small cult following, as it doesn't simply follow the familiar blueprint of the subgenre but actually emulates, however small and poor, and admires a specific type: the Hitchcockian suspense thriller. With excellent photography and camerawork by the talented László Kovács, Petersen borrows from such classics as 'Rebecca' and 'Shadow of a Doubt' while also taking a great deal of inspiration from Hitchcock's quintessential masterpiece 'Vertigo,' particularly in the color scheme and its ornately atmospheric air of mystery. It's done with careful attention to detail and puzzle pieces that pave the road to an unexpected, jaw-dropping twist, which for some will be too shocking to seem credible. But be that as it may, Petersen ultimately uses Merrick's quest for the truth to explore the modern marriage, unions defeated by time and shrouded with deceit and infidelity. It's a cynically dark outlook of the late 20th Century, but it makes for a strong piece of entertainment.

Kino Classics brings 'Shattered' to Blu-ray on a Region A locked, BD25 disc inside the standard blue keepcase. At startup, viewers are taken directly to a static main menu with music.

Aside from a few cuts and bruises, 'Shattered' walks away from the ravages of time with a strong but slightly disfigured 1080p/AVC MPEG-4 encode. The picture is littered with the usual array of white specks and flecks of dirt floating around, meaning producers didn't bother with a remaster or performing some restorative surgery on the original elements, which is a shame because the source has aged pretty well.

On the whole, it still makes for an enjoyable enough watch with only a slightly above average contrast and brightness levels, but there are a good number of flat, faded and poorly resolved sequences that tend to distract. Nevertheless, whites are clean and bright throughout, but blacks are sadly hit or miss with several dull-looking moments and acceptable shadow delineation, making for a mostly flat presentation. The overall palette is in a similar same boat with colors that range from plain and listless to accurate and glowing, but the best aspects are due to vibrant reds and rich greens. Definition and clarity is good for a movie of this period and photographic style, but like everything else, the best scenes are interrupted by softer, blurrier sequences that aren't much better than standard definition. However, the 1.85:1 image is awash with an attractive ultra-fine layer of grain, giving the presentation an appreciable cinematic quality.

Unfortunately, the same procedure is performed in the audio department, letting the movie walk out with a DTS-HD Master Audio stereo soundtrack that's a mix of good and bad.

Although the mid-range is decently dynamic with plenty of appreciable detailing and clarity, especially in the music of Glenn Farr and Hannes Nikel, there isn't a whole lot demonstrating an excellent range between the mids and highs. Dialogue reproduction is great and well-prioritized for the most part, but it's too evenly spread out with the rest of the soundstage rather than being more localized to the center with several noticeable moments of distracting echoes that don't make sense and tend to distract. Low bass is interestingly accurate and responsive, providing the track with a welcomed, weighty presence to both the score and the few bits of action. When utilizing the receiver's upmixing function, ambient effects are nicely extended to the surround speakers, creating a wider and more expansive soundfield. However, this is also at times somewhat inconsistent and in the end, doesn't do much in improving the overall quality.

Borrowing heavily from master filmmaker Alfred Hitchcock, Wolfgang Petersen's 'Shattered' is an elaborately layered noir mystery starring Tom Berenger, Bob Hoskins and Greta Scacchi. Although the production comes with its share of minor flaws, the film is nonetheless an entertaining thriller that essentially pays homage to the classics which forging its own road to a shocking reveal. The Blu-ray arrives with an audio and video presentation that is a slight step up from its DVD counterpart. Supplements are also greatly lacking, but for fans and cult collectors, the price is reasonable enough to add the movie to the collection.