The Curse of Downers Grove

The town of Downers Grove looks like your average suburban neighborhood - but Downers Grove has a disturbing secret.... For the past eight years, one senior from every high school graduating class has met a bizarre death right before graduation day. And this year Chrissie Swanson (Bella Heathcote) has a terrible feeling that she is going to be the one to die. Can Chrissie survive the curse of Downers Grove or will she, like those seniors before her, fall prey to the town's deadly secret?

Stalker films are their own unique sort of film genre as they skirt both Thrillers and Horror films and can sometimes be pleasant combinations of both. On one hand the audience is drawn to the person in distress, usually a damsel, someone who is pure of heart and nature and must find it within themselves to confront the person or "thing" coming after them. On the other side of the coin, the audience is forced to empathize with the stalker, at least enough to understand why they're doing the things that they're doing and therefore in the process feel the danger the object of their obsession faces. 'The Curse of Downers Grove' is co-written by Bret Easton Ellis and is directed by Derick Martin with a cast featuring Bella Heathcote, Lucas Till, and Kevin Zegers. It's a film that sets up its own rules and attempts to become a solid entry into the Stalker/Horror genre but unfortunately, the film folds under the weight of its own ambitions.

For the small Illinois city of Downers Grove, a plague, a diabolical curse rests over the populace. Since 2004, a senior from the High School graduating class has died in some sort of bizarre and violent manner just before graduation day. As the end of the school year gets closer and closer, the students eagerly await the imminent death of one of their classmates - that is except the young and pretty Chrissie (Bella Heathcote). Ever the rational-minded individual, she doesn't subscribe to the notion of the "Curse" everyone keeps mentioning. After all, what do you expect to happen when a kid high on meth climbs a water tower like last year? As Chrissie is more focused on finishing her last year of high school and moving on to college, her best friend Tracy (Penelope Mitchell) thinks the two should party like it's their last days alive - because it very well could be. Forcing Chrissie to go to a party, Tracy accidentally puts her friend into a dangerous situation.

After the two girls end up at a party in the neighboring town, Chrissie narrowly avoids being sexually assaulted by local star jock football quarterback Chuck (Kevin Zegers) by blinding the would-be college prospect in one eye with her thumb. As Chrissie and Tracy escape the nightmare, they're soon to find out that the curse that plagues Downers Grove may be nipping on their heels. While Chrissie just tries to get through her last days of school, Chuck begins to pop up everywhere she goes, threatening her friends, blowing up her locker, and the crazed lunatic even picks a fight with her new boyfriend Bobby (Lucas Till). With his best friends backing every play, Chuck is determined to give Chrissie what she deserves for taking his eye and ruining his future. Chrissie, her brother, and her friends are going to have to band together if they even hope to survive Chuck let alone the town's infamous curse.

Consistency is important in a movie. When you set up your film to be one thing, it's important to ensure that it follows through on the promise it gives. Shaking things up is okay, but if your flick hinges on pulling the rug out from under your audience for no apparent reason, you've got a bit of a problem. 'The Curse of Downers Grove' is one of those difficult drifts into horror where it spends so much time setting up the rules for one genre while it also tries to incorporate the rules for another. In this case, the Horror/Stalker genre marriage is pretty weak at best. I was giving this movie a lot of rope and it ended up hanging me with it by the end. This is one of those movies that tries to be everything but in the end forgets what it is at heart, and the film just falls apart. 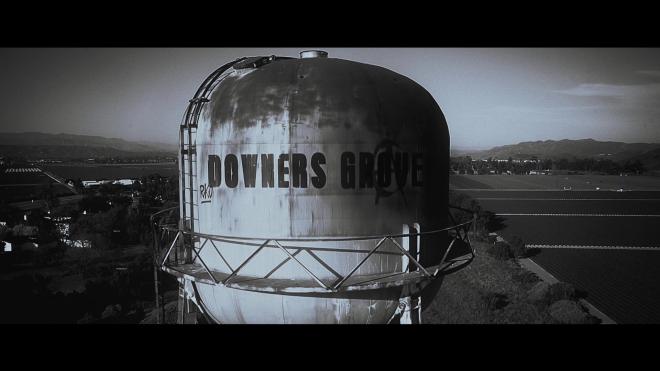 The cast isn't to blame for this one. In fact, Bella Heathcote proves herself a willing and able damsel in distress who is forced to defend herself. Likewise Marin Spanjers as her little brother, Penelope Mitchell as Tracy, Mark L. Young as the would-be boyfriend but is just "friends," and Lucas Till as the new interesting boyfriend Bobby - all of these actors play their part to the letter "T." Even Kevin Zegers plays the obsessive steroid cocaine addict maniac with an abusive father played by Tom Arnold well enough to actually feel like a genuine threat. So, where does this thing go wrong? Honestly, I have to put the blame squarely on Bret Easton Ellis and co-writer and Director Darick Martini. As rock solid as the first act is, the second and third acts are riddled with redundant, boredom-inducing cliches that slows the film to a screeching halt and rounds out with an irritating last second zinger of an ending that isn't all that creative when it had been telegraphed from the very beginning. Seriously if you pay attention through the opening credits and Bella's first dream sequence, you know the ending.

Half of the problem is the fact that 'The Curse of Downers Grove' tries to be like 'Scream' in that it pays homage to and ridicules a number of Horror conventions, but then falls into the same pitfalls. By trying to be fresh, hip, and new it becomes a "been-there-seen-that" bog of 90 minutes. I enjoy a movie that takes its time to set up the rules - see 'It Follows' - and has a strong cast of actors doing solid work, but it becomes painfully clear that this movie got written into a corner and the creative minds behind it didn't know how to dig themselves out. My enthusiasm for this movie was a sliding scale from "Oh, this could be good," to "well that's interesting," to "huh… okay, I'll go with it," to the very end that just left me with an irritated, fed up look on my face as I stared at the credits rolling on my television screen.

'The Curse of Downers Grove' arrives on Blu-ray from Anchor Bay and is pressed on a Region A locked BD25 disc. The disc comes housed in a standard eco case.

'The Curse of Downers Grove' actually survives on Blu-ray with a relatively decent 2.40:1 1080p presentation. Film grain has been retained leading to some very pleasing detail levels. You can enjoy all of the intricacies of the town, costumes, and facial features have a nice presence throughout. Coloring is a bit of a hit or miss affair. Most of the time the film's color palette is warm and natural offering the right amount of primary pop, but every now and again a scene creeps in that features overly saturated blues that can crowd out natural black levels and leave the cast looking sickly pink. This was probably by intention, but just the same, the intermittent effect is a bit odd and very distracting. Black levels are pretty good during well-lit scenes and daylight shots, but the climax is a mass of crushed blacks making it difficult at times to see what is happening to any particular character. Like I said, it's a decent transfer but far from award-winning.

'The Curse of Downers Grove' finds its charms with a strong and resonate Dolby TrueHD 5.1 audio mix. The surrounds are constantly engaged either by sound effects, natural ambients, or the film's music selections giving rise to a very welcome sense of imaging and channel movement. Levels are equally well-balanced as when the movie shifts from quiet low tones to intense action heavy moments, you shouldn't have to shift your volume any. Dialogue is key and thankfully it stays front and center and is crystal clear throughout. The mix keeps to the midranges with only subtle tone shifts into the lower registers giving the film a nice little extra oomph when the climax hits and things get louder but also sound a lot squishier.

Behind The Sceenes of The Curse of Downers Grove: (HD 4:34) A very brief behind the scenes look at the making of the movie. Really not much here as it is mostly made up of some onset footage and little else.

I feel like I say this a lot for many movies, but in the case of 'The Curse of Downers Grove' it's especially true; I was genuinely excited for this flick and was eager to see it. I even enjoyed the hell out of the first twenty or thirty minutes, but then the film reveals it is, in fact, a one trick pony with zero intent on living up to its premise. It's a shame because this is a heck of a talented cast of young actors assembled for what turns out to be a run-of-the-mill cliche Stalker/Horror movie. The video transfer is solid if a little problematic, but the audio is spot on. With only a single extra feature, I'm left to call this one as a rental. I was disappointed by the movie, but it may find a few fans out there with this decent Blu-ray release from Anchor Bay.

Sale Price 14.99
Buy Now
3rd Party 9.51
See what people are saying about this story or others
See Comments in Forum
Previous Next
Pre-Orders
Tomorrow's latest releases