Over Your Dead Body

A beautiful actress (Kô Shibasaki of 47 Ronin and Battle Royale) plays the protagonist in a new play based on a legendary ghost story. She pulls some strings to get her lover cast in the play, although he's a relatively unknown actor. With the cast in place, rehearsals for the play, about an abusive relationship and a grudge, begin. But off stage, some begin to develop their own obsessions. Trapped between the play and reality, they are horrified to find that a real grudge can cross the blurred line between reality and fantasy. Will love flourish? Or has it already turned hideously dark?

When looking at a film or a television series or even reading a novel, there has long been a sense of life imitating art or art imitating life. To a certain extent, it's a chicken and egg argument to determine which inspired the other into being. Sometimes the source of inspiration is cut and dry and offers a clear beginning that leads to an obvious end result. For venerable Japanese filmmaker Takashi Miike's latest effort 'Over Your Dead Body,' the question of art inspiring life and life inspiring art delves deeper into the realms of obsession blurring the lines of fantasy and reality.

Steeped in spiritual traditions of Japanese culture is the living's relationship to the dead and how a tormented soul can exact a measure of revenge for an injustice that was committed upon them in a previous life. With a new stage production of the famous ghost story 'Yotsuya Kaidan,' the cast will begin to see similarities between the material they strive to bring to life as well as happenings within their own lives. For famous actress Miyuki Goto (Ko Shibasaki), the chance to play the lead role of Oiwa who will eventually become a vengeful spirit is an opportunity to not only earn a steady paycheck, but help her lover and aspiring actor Kosuke (Ebizo Ichikawa) earn his big break by playing Tamiya Iemon - a disgraced Ronin who marries into wealth and is ready and willing to commit murder to maintain his new lifestyle.

As rehearsals progress and tensions rise as each actor strives to perfect their craft, the line between art and life, fantasy and reality stretches thinner and thinner. When Miyuki is injured during a seemingly innocent on-set accident at the hands of Kosuke, it is her understudy Rio (Miho Nakanishi) who is called upon to help the rehearsal process while Miyuki convalesce. When the circumstances surrounding the production of 'Yotsuya Kaidan' begin to mirror the deadly ghost story itself, the relationships of the cast, their characters, and the audience begin to blur the lines of reality. Is art imitating life, or has life imitated art with potentially violent and deadly consequences? 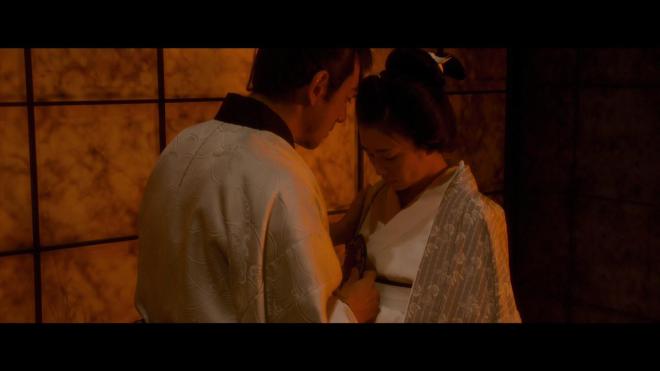 Takashi Miike fans expecting something along the lines of '13 Assassins' or 'Ichi the Killer,' something with a lot of blood and tons of violence may be a bit let down by 'Over Your Dead Body.' If there is a proper comparison to make about 'Over Your Dead Body' is 'Audition' as directed by 1990s era David Cronenberg. Takashi Miike moves the film along with a slow, methodical pace allowing a short, brief moment from within the story of 'Yotsuya Kaidan' to mirror a "real-life" event that happens to the cast. As the film progresses, it becomes more and more difficult to separate the parallel stories to the point that the stage version of 'Yotsuya Kaidan.' It's a heck of a film, especially once the last and very bloody act of the film begins to play out, but in order to get to that point, it may prove to be a test of patience for viewers expecting something more straightforward and traditional.

Part of the issue of accessibility facing 'Over Your Dead Body' is the idea that the film is essentially based on a very old and traditional Japanese ghost story. Now, if you're already someone who has seen director Masaki Kobayashi's 1964 film 'Kwaidan,' specifically the first story "The Black Hair," then you should be in pretty good shape for having a scope of understanding about the subtextual story at play throughout 'Over Your Dead Body.' Not having that little bit of background help may turn out to be a detriment for those not understanding the story parallels.

Whether or not you chose to believe that what you're seeing in 'Over Your Dead Body' is a case of life imitating art or art imitating life I think is an aspect of brilliant filmmaking. Part of me wants to think that as the actors playing their parts become so obsessed with their roles and therefore, each other, that the fictional play becomes a reality. However, you can also take a bit more of a metaphysical approach to this film and start to wonder if the vengeful spirits within the story of 'Yotsuya Kaidan' are not actually influencing their real-life counterparts? I for one love a movie that doesn't specifically spell things out for me to the letter. I love that 'Over Your Dead Body' leaves a lot of these plot and character bits up to interpretation.

Taken as a whole, the film works. I enjoyed it. I dug the cast, especially the interplay between Ko Shibasaki and Ebizo Ichikawa as they play different versions of themselves. However, I will say that it took me quite awhile before I came to like 'Over Your Dead Body.' Part of the trouble is the previously mentioned cursory familiarity of the primary ghost story, but also the film's rather languid pace. If you're not expecting to see a movie that plays like a slow-burning thriller with horror elements, I can certainly understand some people not taking a liking to it. My suggestion is to let the film play out. It took me until about the middle of the film before I clicked with it and let it drag me off. It's not an overly scary film, but it offers up enough subtle chills to make it a worthwhile experience.

'Over Your Dead Body' arrives on Blu-ray thanks to Shout Factory and their Scream Factory imprint on a Region A locked BD25 disc. Housed in a standard case with identical slip cover, the disc opens directly to the film's main menu.

Featuring a 1080p 2.35:1 image transfer, 'Over Your Dead Body' looks generally pretty good. I have a tough time singing its praises because there are clearly a number of artistic elements at play that keep this film from looking like a grand masterpiece in High Definition. While there are a number of sharp and clear shots that provide plenty of detail, there is also a prevailing softness to much of the film that keeps those fine details like facial features or costuming from fully coming into focus. Part of that has to do with the dream-like nature of the film itself so I'm offering up a little forgiveness for artistic intention. That said, some scenes that are well lit and take place in modern times and aren't part of the stage play recreations or a dreamy fantasy can appear a bit smeary. Colors are genuinely pretty strong favoring cooler blues. Black levels are also solid and are free of any notable crush issues, but at the same time, the image retains a flatness to it that fails to provide a robust sense of depth. I'm conflicted with this presentation because part of the way the film looks is clearly by intention but I also wonder if this isn't a limitation of the digital photography used or the transfer itself? Still a strong image presentation overall, it just has some noticeable faults.

'Over Your Dead Body' arrives with a beautiful Japanese DTS-HD MA 5.1 audio track as well as a muddy English-dubbed DTS-HD MA 2.0 audio track. For all intents and purposes, if you don't have any trouble keeping pace with a movie while reading subtitles, stick to the Japanese 5.1 track. The 5.1 track offers up plenty of atmosphere and dimensionality that keeps the surrounds occupied in subtle ways while allowing crisp and clear dialogue to dominate the front/center channels. The English dubbed track simply doesn't offer the subtleties that a film like this requires. Also, the dialogue is just flat and doesn't feel organic in any way to the score or the sound effects. In this case, stick to the 5.1 Japanese track. There is also a 2.0 Japanese track that is still pretty powerful, but again, you don't get to enjoy the quieter and subtle surround effects as well as you would have with the 5.1 track. There are a lot of sound options here, but there really is only one choice if you want a proper experience for this film.

Those Takashi Miike fans expecting a splatter fest of the director's previous works may be bummed to learn that is simply not the focus of 'Over Your Dead Body.' Similarly, those expecting a spooky, ghostly horror film may also be a bit disappointed with something that amounts to being a slow-burn psychological thriller with twists of horror woven into it. My suggestion is that you take your time with it and let yourself be carried away by it eventually. If you're out for instant gratification, this isn't your movie. Shout/Scream Factory has done a pretty good job bringing 'Over Your Dead Body' to Blu-ray with a decent image transfer and a strong audio track. The lack of extras is a shame, but the film itself still makes this release worth a look.

Sale Price 12.86
List Price 19.99
Buy Now
3rd Party 17.11
In Stock.
See what people are saying about this story or others
See Comments in Forum
Previous Next
Pre-Orders
Tomorrow's latest releases