It seemed like a great idea when all-around nice guy Max (Yelchin, Star Trek, Terminator Salvation) and his beautiful girlfriend, Evelyn (Greene, Twilight saga) moved in together. But when Evelyn turns out to be a controlling, manipulative nightmare, Max knows it's time to call it quits. There's just one problem: he's terrified of breaking up with her. Fate steps in when Evelyn is the victim of a fatal, freak accident, leaving Max single and ready to mingle. Just as Max is thinking about moving on with what could be his dream girl, Olivia (Daddario, True Detective) – Evelyn has returned from the grave and is determined to get her boyfriend back... even if that means transforming him into one of the undead.

"There's a freaking Tim Burton movie in your living room!"

I said it before in my review for 'What We Do In The Shadows' - Horror/Comedy is a tough, tough genre to tackle. On one hand you want your movie to live up to horror fans' demands for some frights, while you also have to bend to the humorous will of your audience without becoming a parody of the genre you aim to make light of. It's a delicate balance. Some movies rise to the occasion in grand fashion, others fail miserably. In the case of Joe Dante's 'Burying The Ex' the results are somewhere in the middle.

Horror film and merchandise aficionado Max (Anton Yelchin) has a bit of a problem. Max's beautiful but overbearing girlfriend Evelyn (Ashley Greene) has pretty much taken complete control over his life ever since they decided to move in together into Max's apartment. Adorned with obscure vintage horror movie posters and various memorabilia, Evelyn has slowly but steadily chipped away at Max's home and lifestyle changing him into the vision she has for him. She made him sell his car because it wasn't a hybrid. She wants him to quit his job at a horror and occult shop because she thinks it's beneath him. She's made him go vegan and won't let him have any kind of animal protein - even when a local micro-creamery ice cream shop has custom flavors like Fruit Brute! It also doesn't help much that Evelyn becomes insanely jealous and protective whenever any woman appears to show any interest in Max - especially Ice Cream shop owner Olivia (Alexandra Daddario) who also happens be a horror fan herself.

Things were already getting tough for Max and his relationship with Evelyn, but after meeting Olivia Max's head starts to spin as he has a clear sign of what his life could be rather than what it currently is. Max's half-brother Travis (Oliver Cooper) thinks Max should do what he does with every girl he sleeps with and dump her as soon as possible. Max want's to do this, but he's got too big a heart and doesn't want to hurt Evelyn. After Evelyn rips down all of Max's valuable vintage posters and completely redecorates the apartment - the choice to break up is made a whole lot easier. Taking Travis's advice to meet her in a public place in case she goes nuclear, Max invites Evelyn out to the local dog park where he hopes the sight of cute puppies will soften the blow - only Evelyn doesn't quite make it to the dog park. Blindly crossing the street, Evelyn is promptly run over by a bus. Little does Max know that her dying pledge that she will never leave him will in fact turn out to be a curse.

Appropriately guilt-ridden, Max is having a tough time getting past Evelyn's death - especially since he's the one that invited her to where she ultimately died. After a second chance encounter with Olivia during a horror movie double feature, things start to get a little easier… for a moment at least. Just when things between Max and Olivia are about to take off, Evelyn returns from the grave. A little torn up, a little pale, and smelling a bit ripe - Evelyn looks to be here to stay whether Max wants her to or not. With each passing day, Max must find a way to nurture his budding relationship with Olivia while also figuring out a way to put Evelyn back into her grave - permanently. 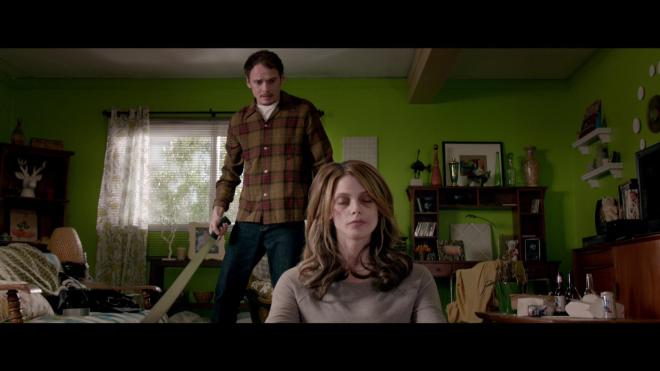 So, if you thought you've seen 'Burying The Ex' already, you're probably remembering 'Life After Beth.' The two films are virtually identical plot wise, but their executions are very different. I would personally say 'Life After Beth' is one of those movies that tries its hand at creating a horror comedy zombie film but doesn't quite find the right balance. On the other hand, 'Burying The Ex' due in large part by the direction of Joe Dante, manages to find that balance between horror and comedy without drifting too far one way or the other. The front end of the film is most certainly in the realm of romantic comedy, but as soon as Evelyn transitions from domineering vegan environmentalist to bloodthirsty jealous zombie girlfriend, the horror elements start to kick into gear and things become a lot of fun. While never truly "scary," 'Burying The Ex' offers plenty of jump scares that give you a good yelp but then leave you laughing. Part of the fun is the damage Evelyn can now endure. Since she's effectively a zombie, she can take a hit can keep on ticking - even with a broken neck.

While Anton Yelchin plays the dopey stressed-out boyfriend well enough, it's Ashley Greene who delivers the real stand out performance here. Sure her demands of her boyfriend may seem a bit far-fetched at times and perhaps a little too demanding, but then I had been on some dates that were on that level of awkward from moment one. On top of her antics having to be the source of the film's humor, Greene also has to be the source for all of the frights and scares. With the help of some solid practical effects work with minimal CGI, she gets the job done. While funny to see her decay and become more grotesque, it's also darn creepy and she nails it. On top of Yelchin and Greene, you have Alexandra Daddario playing her role as the sidelined would-be girlfriend and Oliver Cooper being the source for a number of solid laughs. Had this cast at all been off their game, 'Burying The Ex' could have easily drifted into the realm of trite and boring horror comedy.

Taken as a whole, 'Burying The Ex' is a solid source of entertainment. My only real gripe with the film is that it kind of takes a little too long to get going on that second act. The movie seems to want to go out of its way to prove to the audience why they shouldn't like Evelyn and why they should like Olivia. After some quick exposition between Travis and Max, that's all that really needs to be done. While I do think Ashley Greene nailed the part, I think a lot of the controlling antics could have been tapered back a bit. Even at a swift 89 minutes run time, it feels like 9 minutes could have been cut from that front end and the film would have been just fine. That really is my lone issue with 'Burying The Ex.' Once that second act kicks in and Max has to figure out how to kill his already dead girlfriend, things get funny and creepy very quickly and thankfully stay that way all the way through to the end.

As far as the return of horror icon Joe Dante, I'd say this is a pretty solid effort. As a guy that has a long history of working on slim budgets, he makes the most out of some solid practical effects and old school techniques to make 'Burying The Ex' a lot of fun. I feel like after this film and 'The Hole' Dante has carved a nice little niche for himself in the area of independent horror. These latest outings may not be his absolute best efforts, but they're a good reminder of what we loved about the man in the 80s and early 90s. It makes me happy to see that he's returned to making features again and I hope he finds more projects to his liking because I want to see more of Dante's efforts make it to screens, even if all that means is we get another cameo from Dick Miller!

'Burying The Ex' makes its Blu-ray debut from Image Entertainment and RJL entertainment. The film is pressed on a Region A locked BD25 disc and comes housed in a standard case with identical slipcover. This disc is currently a Best Buy Exclusive release.

Shot digitally, 'Burying The Ex' proves to be a very nice looking 1080p 2.40:1 Blu-ray transfer. Detail is present and offers a lot to appreciate with the film's production design. From Max's apartment and his work in the horror novelty shop to exteriors and darker locations like the Hollywood cemetery, everything comes through with fantastic detail. Colors are bright and have plenty of primary pop to them. Flesh tones are equally impressive and as Evelyn rots and she becomes more grotesque looking it provides a nice contrast to the "healthy-looking" cast. Black levels, for the most part, are very strong and offer plenty of shadow layering and depth, but during really dark sequences there is a fair bit of crush where it feels like the image becomes flatter and some of the detail is lost in the process. Free of any banding or other artifacts, this is a very strong presentation.

With a solid English DTS HD MA 5.1 audio track, 'Burying The Ex' delivers the goods. So much of the film is dialogue centered that it's easy to miss the subtle surround effects that are layered throughout the film. Imaging is a blast here as well - especially during Evelyn's death; it's a fun sound cue that the bus is coming without even seeing it. Levels are just fine as sound effects, dialogue and Joseph LoDuca's score have plenty of room to breathe without overlapping. Dialogue keeps to the center/stereo channels and only drifts into the surrounds if the scene calls for it. All around this is a robust track that delivers on all of the best elements that a horror picture and a comedy should have.

Sadly, not a single extra feature is present on this disc.

'Burying The Ex' is a good bit of Horror/Comedy fun. It may not be Joe Dante's best effort ever, but it serves as a solid reminder why the guy's movies were so much fun in the 80s. The Blu-ray from Image Entertainment and RJL Entertainment aces the A/V presentation test but unfortunately, there isn't a single extra on this disc. Part of me hopes that when this movie moves beyond being a Best Buy exclusive that it picks up a bonus feature disc, but that would be more than a bit irritating considering stuff like that should be included in the initial release. As it stands, this is a fun movie and I'm calling it recommended on that front alone.