When an American cowboy stumbles upon a gypsy family in a wind-swept ghost town, they offer him a fortune to escort a princess back to her home in Spain. But this silent Stranger finds himself in over his head (and strung up by his feet) when he gets caught in the middle of an epic battle involving Vikings, the Moors, brutal barbarians, evil spirits, a raging bull, and a diabolical Shakespeare-quoting hunchback. Tired of their never-ending attempts to kill him, the cowboy arms himself to the teeth with guns, dynamite and a special surprise. Now it's the Stranger's turn to GET MEAN!

"Now any man who would try to roast a fella like a pig, is trash. but you're worse than trash, you're garbage!"

Some movies just know what they are and aren't ashamed to be as wild and crazy as possible. These movies may not always be the most thought out works of filmmaking, but you can't deny their bravery and even appreciate their brazenness. These are the movies that dare the audience to continue with the ride long after the rational portion of their brain has told them to jump ship. 'Get Mean' is just that sort of movie, featuring star Tony Anthony as a cowboy on a mission to deliver a princess to Spain and fight an army of Viking Barbarians for a lost treasure that is guarded by spirits of the dead!

When you're being dragged behind a horse, your day can only get better once the animal stops for water - this is unless you're 'The Stranger' (Tony Anthony). For The Stranger, life is about to get a whole lot more complicated after a gypsy family hires him to escort Princess Elizabeth Maria (Diana Lorys), the last descendant of their noble line back to Spain so that she can lead her people against the invading army of barbarians!

Only these wild barbarians with horns on their helmets aren't out there doing what they want exactly. In fact, their strings are being pulled by outside forces lead by the Shakespeare quoting Diego (Lloyd Battista) that are hellbent on capturing the Spain for themselves. This doesn't really mean a lick to The Stranger since he's in it for the money. $50,000 gold in fact. The only real problem for The Stranger is that in order to get his money he's going to have to deal with some barbarians, an army of Moors and some Vikings. After getting dragged by a horse, hung up by his feet, burned, and then shot, The Stranger is going to have to arm up with as many guns as he can possibly carry - including his signature four-barreled shotgun and a lot of dynamite.

'Get Mean' is the last of "The Stranger Films" that starred and were produced by Tony Anthony. Those other films were 'A Stranger in Town,' 'The Stranger Returns,' and 'Stranger in Japan.' These films were made with a far more cartoonish exuberance than say something along the lines of 'The Man With No Name Trilogy.' Apparently of all 'The Stranger' films that were made, 'Get Mean' was the one that was the most heavily cut and re-edited against Tony Anthony's wishes. It's a wild and near-incomprehensible film that you're either going to love or hate. 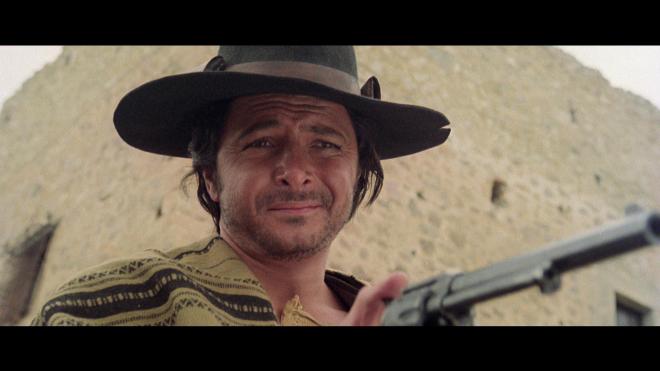 The plot mechanics are pretty simple to follow and provide for a nice setup for the visual zaniness that follows. A group of people who must turn to a mysterious stranger to save the day is a pretty tried and true trope, but toss in a princess, some barbarians, some knights, Vikings, and The Moors and you have a movie that has taken the insanity dial and turned it all the way up to 11. The film is almost completely indescribable to the point that one is left simply to say that if you are someone who likes weird and wild movies, you're in for a treat. Suspension of disbelief is essential if you're going to get along with this movie, but I strongly suggest that you do - the big grand finale is worth the wait!

What keeps 'Get Mean' going is the film's infectious energy and deadpan humor. It is a movie that embraces its strange nature and just runs with it. The film plays things so completely straight that the inherent humor shines brightly and never feels forced or fake. The last time I saw a western of this style was Sam Raimi's 'The Quick and the Dead,' only that really isn't an accurate comparison, 'The Quick and the Dead' has subtlety by comparison! Since this was the last of the Tony Anthony produced 'The Stranger' movies, it also happens to be the first to make it to Blu-ray in the United States. I hope this disc gets the ball rolling so the remaining films see their day in the sun because I want to see the previous entries. Any movie that leaves you wanting more has gotta be a good thing!

'Get Mean' arrives on Blu-ray thanks to Blue Underground and is pressed onto a BD50 disc. Also included is a DVD of the film as well as a booklet featuring an incredibly informative essay from film historian Howard Hughes who goes into incredible detail about the history of the series.

'Get Mean' has a lot to get happy about with a colorful and strongly detailed 2.35:1 1080p transfer. With fine film grain retained throughout, the film looks fantastic in this HD presentation. From the intricate and wild costuming to the crazy makeup effects of the barbarians to the rugged and beautiful landscape, everything is on display and it is glorious. It's a lot of fun to see some familiar locations that were used in other Spaghetti Westerns of the era as well as some of the big epics from David Lean used for this underfunded adventure film. Colors have plenty of pop to them throughout, primaries like reds, blues and greens have a wonderful presence to them. Black levels are rock solid and offer some truly inky blacks - especially during the film's climax - that provide a nice sense of depth to the film. This restored print is in fantastic shape as it was incredibly hard to spot any print wear of any kind that would even be worth mentioning. All around this is a great looking transfer that just makes the movie that much more fun to watch now that you can see and appreciate all of the work that went into it.

'Get Mean' gets a pleasant auditory kick out of it's English DTS-HD MA 1.0 audio track. As a true Italian-made Spaghetti Western, the film enjoys that wonderful dubbed in sound where each individual sound element has that unique pop and presence. Dialogue crackles with real life - only in that fun way that doesn't sound quite real. Sound effects are rich and spaced well enough but like the dialogue, they don't quite sound organic in all of the best ways. The films plucky and humorous score from Franco Bixio fits the film perfectly, and yet it has that vibe to it that it's not actually part of the film at all. All of these elements come together to create an impressive audio track that is free of any hiss or dropouts or any sort of age-related wear and tear. Imaging is understandably limited given the track's mono nature, but there is still a sense of directionality that really helps some of the bigger scenes within the film come to life. The track is well balanced and you shouldn't have any need to monitor your volume.

Audio Commentary: Producer/Star Tony Anthony, Co-writer/Star Lloyd Battista and Executive Producer Ronald J. Schneider band together and put out an informative and entertaining audio commentary. There are only a few quiet moments, but otherwise it's virtually nonstop information. It's amazing that this movie came together at all considering the film's budget constraints.

The Story of the Stranger: (HD 23:12) A great interview with Producer/Star Tony Anthony about the character's history.

Looking For Richard: (HD 11:33) A fun interview with Co-writer/Star Lloyd Battista and it's clear he and Tony Anthony had been long friends even before they started making movies together.

Beating a Dead Horse: (HD 9:50) This is a fantastic interview with producer Ronald J. Schneider as he details the difficulties of keeping the film funded and his history in the business.

Deleted Scenes: (SD 8:28) Some of the deleted content from the film, some of it makes sense where it would fit within the movie, other times not so much. Even in this really rough condition they're still a good bit of fun to be had.

Theatrical Trailer: (HD 3:23) A heck of a fun trailer that really plays up the humor of the film without ruining the fun.

A Stranger In Town Trailer: (HD 2:23) I really hope this gets an official release here stateside soon!

The Stranger Returns Trailer: (HD 2:16) Any movie that uses The Isley Brothers' "Shout" in their marketing has got to be worth watching!

The Silent Stranger Trailer: (HD 2:31) Apparently this blends Samurai movies and Spaghetti Westerns… I really need to find a copy of this!

Treasure of the Four Crowns Trailer: (HD 1:52) Another Tony Anthony starring 3D movie from the 80s!

Radio Spots: (1:57) I love how they sell movies for radio, these spots really play up the exploitation vibe while saying the film's title as many times as they can in 30 seconds!

'Get Mean' is just one of those wild and fun movies that needs to be seen to be believed. What starts out as an honest-seeming western goes from 0 to 90 in about the first five minutes and never lets up on the gas. I had a blast with this one. Gather up some friends and you should have a pretty great time too. Blue Underground has brought 'Get Mean' to Blu-ray in fine form featuring a fantastic A/V presentation as well as a huge load of fun and informative extras. Considering the size of the smile on my face after seeing this one, I'm left to call it highly recommended!

Sale Price 16.94
Buy Now
3rd Party 14.2
In Stock.
See what people are saying about this story or others
See Comments in Forum
Previous Next
Pre-Orders
Tomorrow's latest releases