Every once in awhile, it isn't a bad idea to judge a book by its cover, or more appropriately in this case a Blu-ray. I'm one of those film nuts that just likes to enjoy a new movie so it behooves me to actively not judge the quality of a movie by bad cover art or by a dodgy photoshop-riddled poster. But then there is this little voice in the back of my head that leads me to believe that sometimes the sum of a film's parts are all on display right there on the cover. In the case of 'Wolf Warrior,' you get a whole lot of Chinese action star Wu Jing with only a little bit of Scott Adkins here and there.

Expert marksman Leng Feng (Wu Jing) is the lead sniper for the Chinese Special Forces. He and the rest of his squad are dead set on taking down a drug trafficking ring that is forcing people to become drug mules in order to transport their product. After the raid results in a stalemate with the drug trafficker holding one of his people as a hostage inside a brick bunker. With no way to enter, it leaves Leng Feng's team out in the open where they can be picked off one by one… that is unless he takes matters into his own hands. Disobeying orders to hold his fire, Leng Feng takes three successive shots into the brick and manages to punch a hole through to the other side killing the bad guy. Instead of being welcomed as a hero for saving lives, Leng Feng is court-martialed.

Under intense interrogation, Leng Feng is grilled by his commanding officer and a mysterious woman Col. Long Xiaoyun (Yu Nan) about the motives behind his actions. It turns out the interrogation is more of an interview as Leng Feng has proved himself to be a shrewd operator with a cunning war sense that could be used by the elite squad known as The War Wolves. While Leng Feng's star may be on the rise, Ming Deng (Ni Dahong) the brother of the dead drug runner Leng Feng killed is hungry for revenge. Ming Deng has hired a savage group of mercenaries lead by the brutal Tom Cat (Scott Adkins) to lead a mission to kill Leng Feng, while also aiding Ming Deng's ultimate goal of creating the perfect piece of germ warfare that either specifically kills Chinese people, or significantly alters their genetic structure.

While Leng Feng and the rest of the War Wolves are on nonlethal training maneuvers playing war games against Chinese special forces, Tom Cat and his squad set their plan in motion. After Leng Feng and the remainder of his squad managed to survive an attack from a pack of hundreds of CGI wolves, Tom Cat and his band of killers savagely attack the War Wolves and Chinese Special Forces Soldiers killing dozens of men. Since Leng Feng and the survivors of Chinese Special Forcers are stranded, it's up to them to hunt down and kill Tom Cat and his men before they cross the Chinese border and prevent Ming Deng from escaping with his cargo of genetic samples and super viruses.

If that summation at all started to not make much sense, I apologize, but that, in a nutshell, is the movie. Perhaps the best way to describe 'Wolf Warrior' is "China's Michael Bay Movie." Loaded with random gun fights, expensive and slick special effects along with some crummy CGI, over the top performances, really big guns, rousing thematic action movie music, with a ham-handed patriotic bent, 'Wolf Warrior' is not a movie that should or really can be taken seriously. It's just 90 minutes of dumb fun and should be treated as such. 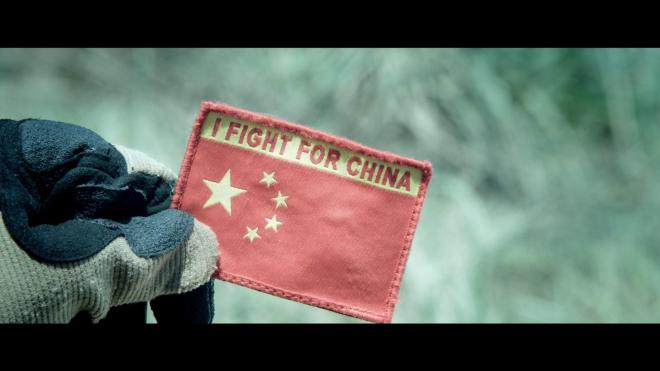 While 'Wolf Warrior' may be good dumb fun, it's got more than a few issues dogging it. For starters, The special effects are rather hit or miss. One moment 'Wolf Warrior' can appear to be a bloody celebration of practical effects as bullets rip through soldiers and knives leave a long bloody streak in the air as they're plunged into someone's gut or glanced over their neck, but hen the CGI kicks in. Virtually all of the scenes featuring China's top military brass look to have been shot in front of a green screen. On top of those frequent and distracting moments, there is a laughably bad parachute sequence and the previously mentioned fight with a pack of wolves. Playstation 2-era graphics is just an embarrassment for a movie of this size and scale.

Adding into the mix is the idea that 'Wolf Warrior' is supposed to be some sort of Rock'm Sock'm martial arts slugfest. It's not. In fact, the real intense and worthwhile action doesn't even kick in for over an hour leaving just over twenty minutes to work in some thrills. Sadly it really is too little too late. Considering 'Wolf Warrior' was marketed as a battle between Wu Jing and Scott Adkins, martial arts fans will be disappointed to learn that the athletic Mr. Adkins is virtually a non-presence throughout most of this film. He's there to set a few bombs, tap on a tablet PC and that's about it. Once the big climatic battle breaks out between Wu Jing and Scott Adkins, the whole buildup amounts to little more than a couple of kicks, a punch or two, and a very brief knife fight. For all it was worth, the role of Tom Cat could have been played by Scott Speedman and nobody would have known the difference.

'Wolf Warrior' is just one of those movies that cooks up a good revenge thriller plot and just whizzes it down its leg. The setup mechanics are too cumbersome and confusing, the character motivations are thin at best, and the red herring "Genetic Bomb" plot is laughably bad. 'Wolf Warrior' is a movie that is entirely preoccupied trying to look cool rather than actually being a good and enjoyable film. Color me disappointed by this outing.

'Wolf Warrior' arrives on Blu-ray from Well Go USA and is presented on a BD25 disc. Housed in a standard case with slip cover, the disc opens to a slew of trailers for other Well Go USA releases before arriving to an animated main menu.

'Wolf Warrior' enjoys a vividly detailed, richly colored 2.35:1 1080p transfer. Oftentimes, this movie is a real beauty providing impressive detail levels that allow you to fully appreciate every characteristic of an actor's face, their clothing, as well as the densely forested scenery. Colors are also impressive allowing for plenty of blue and green primary pop that leaves flesh tones looking healthy and accurate. Black levels are also very impressive as the image has a strong three-dimensional quality to it - which is good because it was originally released in 3D in China.

Where this 2D presentation falters is with the film's numerous digital visual effects set pieces. The previously mentioned parachute and wolf fight sequences flatten the image, crush black levels, skew colors and make the image fairly unattractive looking. Put in the context that these sequences were composed with 3D presentation in mind, it makes sense, but for a 2D transfer it looks really bad. Overall the transfer is very strong and should please fans.

Sporting a DTS-HD MA 5.1 mix, 'Wolf Warrior' reaches action movie auditory nirvana. The audio mix is dynamic and can stretch your sound system in a fun way with loud bursts of gunfire, intense action movie dialogue, and big loud explosions! Imaging is an absolute delight here - especially in the last 40 minutes when the action really picks up when you have soldiers and mercenaries running through the woods with guns firing from every angle. Even during the film's quieter moments the dialogue, score, and effective ambient tracks keep the surrounds constantly engaged throughout the run.

Also included on this disc is a DTS-HD 2.0 track that quite frankly is a bit pointless. While it covers the basics of dialogue and some of the more stereo center sound effects, the surrounds are flattened and lost in the process. This mix may work fairly well if you're only running on stereo speakers, but I found it to sound very tinny and hollow.

On a side note, this is a mixed language track. While the primary spoken language is Cantonese, there is plenty of English spoken as well as Scott Adkins and the rest of the squad of mercenaries all speak English. Oddly, since we can clearly hear what they're saying, the English language subtitles also subtitle their words, which can be a bit of fun because sometimes they miss and aren't exactly accurate.

Trailer: (HD 1:38) A pretty basic trailer that sets up the movie to be a big brawl fest, but sadly it isn't that.

Previews: (HD) The same string of trailers that ran at the beginning of the disc.

'Wolf Warrior' was one of those movies that I just wanted to be entertained by. To a certain degree I guess I was, but not for the reasons I'd hoped for. I wanted to see Wu Jing and Scott Adkins pummel the hell out of each other, instead I got a pseudo-war film with a couple of kung fu kicks tossed in at random. I may not have loved this flick, but the A/V presentation is absolutely first rate. Without any extras to speak of, I'm left calling it as a rental.

Sale Price 27.99
Buy Now
3rd Party 3.57
In Stock.
See what people are saying about this story or others
See Comments in Forum
Previous Next
Pre-Orders
Tomorrow's latest releases