The World of Henry Orient

Discomfort is a big part of the process of growing up. The things that were normal for you just a year or even a few days ago can all of a sudden feel out of place as strange new emotions and feelings start to take over. All of a sudden the simple things like going out to play on a weekday afternoon or seeing your favorite childhood movie could seem irritating or even boring. All of a sudden you can see someone and feel something you've never felt before. These new wild emotions can make you do zany and crazy things that seem perfectly sane. For the two young girls in 'The World Of Henry Orient,' love is the wild emotion that compels them to obsess over a man - even though their antics drive the man into a state of paranoid lunacy.

Henry Orient (Peter Sellers) is a wildly eccentric concert pianist with a unique playing style. One could call his fingering ability as unique or quirky or even the signature of a genius musician. But the fact of the matter is, the man simply doesn't take any time to practice. Why would a professional musician fail to practice his talent when he has a concert at Carnegie Hall? The simple answer to that question is libido. The time Henry should be spending learning the music and practicing is wasted pursuing the young and beautiful Stella Dunnworthy (Paula Prentiss). He endlessly chases her because the idea of having an affair with a married woman excites him. Little does Henry know that a chance encounter with a fourteen-year-old girl named Val (Tippy Walker) while he tries to woo the Mrs. Dunnworthy would turn his life absolutely onto its head.

Val Boyd comes from what could be described as a broken home, only her parents are still together. Her father Frank (Tom Bosley) is an important businessman and travels around the world with his wife Isabel (Angela Lansbury) which means that young Val must stay behind in a New York flat so that she can continue going to school. As luck would have it, the new student on campus - Marian "Gil" Gilbert (Merrie Spaeth) - has a similar background, only her parents are divorced and she hardly ever sees her father. It doesn't take them long to realize they're the perfect match and swiftly become best friends.

Rather than concern themselves with trivial nonsense, Val and Gil set about creating an intricate pretend fantasy life. They pretend Val has a medical condition as a joke on some hapless passersby. They run around Central Park believing they're being tracked by Chinese bandits, which just so happens to put them on the path to running into the enigmatically eccentric Henry Orient. After accidentally breaking up Henry's most recent attempt at seducing Stella, Val falls head over heals for the strange man. Together the two girls set out to learn as much as they can about Val's mystery man. They soon learn of Mr. Orient's vocation, they purchase his only two record albums, they dig up old newspaper clippings and magazine articles, and it doesn't take them long to find out where poor Henry lives.

Little are Gil and Val aware of the fact that as they set out to learn about the man they're obsessing over in order to gain his affections, they're in fact driving the man insane. Henry sees them sitting outside his apartment. He sees them at his concerts. He sees them in his sleep. He sees them even when they're not even there! As Val and Gil come to learn more about Henry, they also come to learn the important intricacies and insecurities that come from establishing a lasting friendship with each other. A turn of phrase can be taken out of context or a simple act can be misinterpreted. While these young adolescent girls learn of life's little quirks, poor Henry Orient is slowly losing his mind. 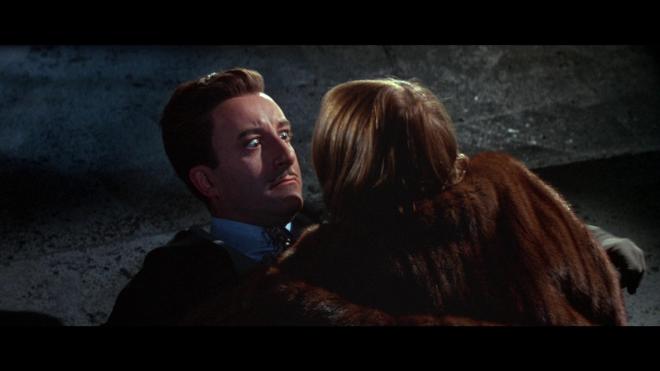 'The World of Henry Orient' is a charmingly funny and endearing coming of age film. While Peter Sellers may earn top billing as well as play the titular character - this is the story of Val and Gil and their time together experiencing the world around them, learning about adult feelings and actions, and ultimately growing into young women and the odd discomforts that come with adolescence. Written by Nora and Nunnally Johnson and directed by the legendary George Roy Hill, 'The World of Henry Orient' is a sweet-natured drama-comedy. It's a film that is relatively light on belly laughs, but leaves you with a happy grin on your face.

Tippy Walker and Merrie Spaeth are simply wonderful together in this movie. Their chemistry as best friends is evident from the first moment they meet as Val loses all of her music notes into the East River. Had these two not been believable as best friends, their adventurous fantasy lives wouldn't have been nearly as fun to watch. When you think about their antics stalking Henry and driving him into a state of permanent paranoia, you normally should be shocked and appalled, but because these two young women are so charming and innocent Henry's self-destruction becomes hilarious.

For those people coming into 'The World of Henry Orient' looking to see 'Pink Panther' style hijinks should probably temper their expectations, as this is not that kind of Peter Sellers performance. In point of fact, it really isn't his movie at all. Sellers character is probably best described as a chapter note in Val and Gil's expanding understanding of love and desire and the way the world works. As they gain a slight handle on their feelings or adult behaviors, Henry catches the brunt of their new awareness. It sounds sad in a way to break it down like that, but at the same time Sellers' grasp for comedy makes it a fun and endearing watch. The rest of the cast, from Angela Lansbury as Val's mother to Phyllis Thaxter as Gil's mother Avis deserve praise as parents who weren't quite ready to handle their respective daughter's behaviors. Special mention absolutely must be made for Tom Bosley's performance as Val's semi-absentee father. The man knows how to play a concerned dad - an ability he made great use of during his long tenure on 'Happy Days.'

People expecting to see some sort of madcap wild and zany comedy may feel a bit disappointed by 'The World of Henry Orient.' While it does have its wild and crazy funny moments, it just isn't that kind of movie. This is a coming of age story about two kids who come to learn about themselves and the world around them - while driving a man insane. It's more of a sweet-natured comedy mixed with some solid drama elements than a silly Peter Sellers romp. If that sounds to your liking you should have a wonderful time with this heartwarming little film.

'The World of Henry Orient' arrives on Blu-ray thanks to Twilight Time. Limited to 3000 units, the disc is pressed on a a BD50 disc and comes in a clear plastic case with booklet featuring an essay by Julie Kirgo.

I absolutely love it when I see a catalogue release get the kind of quality attention and effort this one has. Simply put, the 2.35:1 1080p transfer for 'The World of Henry Orient' is spectacular. The print is clean without any evidence of damage or speckling. Colors are bright, bold, and beautiful offering plenty of primary pop during warmer scenes and maintain life-like cooler tones when the film shifts closer towards winter. Flesh tones are well balanced and no one appears too pink or too sickly. As film grain has been nicely maintained, detail levels are outstanding. Individual hairs, facial details, Val's massive fur coat, even individual bricks on buildings stand out nicely. Black levels are equally impressive and balanced without any contrast issues ensuring the film maintains a solid sense of depth at all times. The only real issue to speak of isn't one that is a fault of the transfer necessarily and that involves the film's optical dissolves and scene changes. The image can noticeably flatten and the intensity of the grain structure can kick up a notch or two. Otherwise, this is a near-perfect transfer.

Sporting a strong and robust DTS-HD MA 1.0 track, 'The World of Henry Orient' earns high marks. Initially, I was a tad worried that the single channel sound source would be a bit tough for the mix to handle, but thankfully I was wrong. The film's dialogue moments come through with outstanding clarity, sound effects feel natural, and Elmer Bernstein's plucky and fun score has just the right amount of presence. Even as a mono track there is still a nice sense of imaging. A full stereo track could conceivably have beefed up the resonance of some of the quieter moments, but otherwise this mono track offers a lot to appreciate.

Audio Commentary: Film Historians Jeff Bond, Julie Kirgo and Nick Redman talk about the history of the film, some behind the scenes stories and some details about Peter Sellers. It's a nice track overall and complements the film well enough.

Trailer: (HD 2:40) A nice little theatrical trailer that sells the fun side of the film.

'The World of Henry Orient' is one of those small wonderful movies that is a joy from start to finish. Watching Peter Sellers is always a treat because the man was so versatile and could play deadpan and manic in the same scene and it could still look and feel effortless. With an impressive A/V presentation, Twilight Time does this film a great justice with their Blu-ray release. The extras are a bit scanty, but the isolated Bernstein score is worth the time to listen. I'm calling this one as highly recommended because it really is that great of a film.