It's fright lights, big city when the Monster High ghouls head to Boo York! Cleo de Nile is invited to attend a fancy gala celebrating the return of a magical comet and, of course, she brings along her beast friends. But their trip isn't all fun and frightseeing because Nefera, Cleo's sister, uses the comet's powers for her own spooktacularly sneaky plans. Can the monsters unwrap the mystery of the comet in time to stop Nefera? Find out in Boo York, Boo York, the first-ever Monster High musical, featuring eight original songs.

The ghouls at 'Monster High' break out in song and dance numbers every few minutes in 'Boo York, Boo York,' another clever twist in pop-culture references that often make the animated series a mild delight. However, in this latest entry to the fashion doll franchise, the several duets and elaborate routines mostly miss their mark and ultimately fail at hitting the right note. Visually, the makers clearly placed more extravagant efforts on this hour-long episode than in previous entries, by which I mean the music and a push for camerawork glamorizing the monsters' fiendish misadventure. The artwork and design remain the same — the cost-effective sort seen in the Saturday morning cartoon variety — but the style and movement of the camera aim for the glitz and enchantment that not only complements the storyline but attempts to imitate Hollywood-style musical productions. For the most part, the short animated film wins a few earned congratulatory earmarks in that department, but the songs themselves are misfire equivalents of Toralei's singing talents.

Well, in truth, the music and singing are not quite at the ear-grating level of Toralei's high-pitched shrieks, which are done for comedic effect, not with any note of seriousness, but the overall songs and routines are, to be perfectly honest, not very well done. At least, not to the caliber the filmmakers were clearly aiming for, which in turn leaves the ghouls failing to meet their aspirations when they all travel to Boo York City for Cleo and Nefera's family gala celebrating the return of a mysterious, magical comet. The goal of making Broadway — or "Bloodway" as the teenage monsters call it — appealing to the little tykes is admirable and would have made for a fun watch, but the excitement and spirit of making it big in The City of Dreams just aren't there. The glitz and glamor and all that jazz are sorely lacking in a story that ultimately falls flat and even off-key in a couple areas, namely Nefera's nefarious plan to break up Cleo and Deuce. There's no need to spread the news or stray too far in those vagabond shoes because this is one show sure to put the city to sleep. 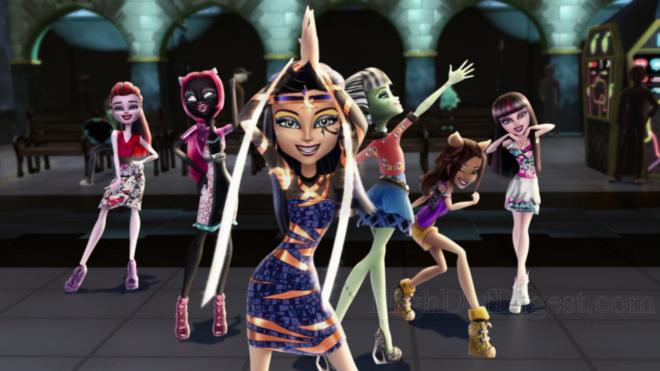 In all fairness, a cranky, old miser like myself is nowhere near the vicinity of the intended target audience, so my opinion most definitely should be taken with a truckload of salt, not just the grain. Nevertheless, this isn't one of Mattel's stronger efforts, and especially after this old fuddy-duddy has found himself better enjoying the previous three installments, expectations have been set a bit higher for the franchise. The problem can easily point to an unnecessary subplot about Cleo being tricked by her sister and father into promising herself — as in to be betrothed at a later date — to Seth, a young Egyptian prince who always wears a pharaoh's mask, a device for a mawkishly predictable twist. The evil scheme forcefully injects a bit of physical buffoonery on the part of Deuce that's sadder than funny — though I'm sure some kids would disagree — feeling largely desperate than genuine while also doing nothing of note with the mystery of the comet. It simply distracts from the movie's better parts, particularly that of stardom on the world's most famous stage.

Although the music and dance routines barely come close to matching the weakest in something like 'High School Musical' or 'Glee,' 'Boo York, Boo York' does come with one small saving grace: the idea of shooting for the stars and taking risks. Sadly, the filmmakers didn't really place as much attention to this aspect of the story as they probably should have, but they make the time to introduce a trio of new characters. Pop star sensation Catty Noir, who delivers one of the more notable songs, is a lovelorn starlet searching for inspiration to write her latest shock-topping hit and hip-hop street performer Pharaoh might provide the spark she's been looking for. Catty may be the star, but Luna Mothews steals the spotlight with her big ambitions and arguably performs the best musical number of the lot where she essentially battles Toralei to a sing-off. Although much of the runtime feels like a drag and oddly melodramatic, at least, this one scene serves as a highlight that better captures the Broadway musical charm the filmmakers wanted and make it memorable.

Universal Studios Home Entertainment brings 'Monster High: Boo York, Boo York' to Blu-ray as a two-disc combo pack with a code for an UltraViolet Digital Copy. A Region Free, BD50 disc sits opposite a DVD-9 inside a regular blue keepcase with a glossy, embossed slipcover and a small catalog for collectors. After a couple skippable trailers, viewers are taken to a menu screen with full-motion clips, music and the usual options.

Although the animation work is of the economical, Saturday-morning-cartoon variety, the AVC-encoded transfer is nonetheless an excellent presentation. Fine lines around various objects are sharply detailed and very well-defined. The hair and clothing of characters are the most elaborate, exposing the distinct meticulous work that went into the ghouls' fashionable clothes and hair. The glitzy and dazzling 1.78:1 image is full of sumptuous, richly-saturated colors. Much of the palette mostly utilizes a vibrant and buoyant array of softer pastel hues, but primaries remain bold and cleanly-rendered. Blacks are inky and full-bodied while contrast levels are brilliant with crisp whites, making the high-def video an attractive watch the family ghouls are sure to enjoy.

Similar to previous ghoulish adventures, the DTS-HD Master Audio soundtrack sounds great and gets the job done, but it still feels every bit like it was made for television where much of the action takes place in the fronts. Nonetheless, imaging feels broad and expansive with convincing off-screen effects that move smoothly between all three channels, exhibiting an extensively detailed mid-range and excellent separation. Low bass isn't particularly noteworthy, but it provides accurate response and a nice, weighty punch to the music and few bits of action. Although this is mostly a front-heavy presentation, the design occasionally employs the rears with a few discrete effects of city noise, but in spite of this, the lossless mix feels dry and uninvolving for a majority of the time. Still, with distinct, well-prioritized vocals, the lossless mix is a good deal of fun for the little monsters everywhere.

The ghouls at 'Monster High' break out in song and dance numbers every few minutes in 'Boo York, Boo York,' another clever twist in pop-culture references that often make the animated series a mild delight. However, in this latest entry to the fashion doll franchise, the several duets and elaborate routines mostly miss their mark and ultimately fail at hitting the right note. The Blu-ray arrives with the usually good-looking audio and video presentation, but the supplements are lacking. Nevertheless, the little monsters in the family should be more than satisfied with the package.

Sale Price 9.47
List Price 19.98
Buy Now
3rd Party 9.47
In Stock.
See what people are saying about this story or others
See Comments in Forum
Previous Next
Pre-Orders
Tomorrow's latest releases