Peggy Carter becomes a S.S.R. agent during WW2 after her boyfriend, Steve Rogers (Captain America) is feared dead in an explosion.

Superheroes are everywhere, that is the plain and simple truth of the day. They've successfully erupted from the paper page and have leapt onto theater and television screens in grand fashion. With this glut of comic book-based content, some programs and films are decidedly better than others, some are unique and exciting, while others just can't seem to tell a clean and neat story without stretching the plot too thin. Marvel's period piece 'Agent Carter' is a comic book story that sits neatly within the world of spies and international intrigue. With its shorter, leaner eight-episode run, 'Agent Carter' tells a thrilling story with strong characters that never feels like it has overstayed its welcome.

After the defeat of The Red Skull, the destruction of Hydra, and the end of World War II, Peggy Carter (Hayley Atwell) mends her wounded heart by digging into her job at the SSR, Strategic Scientific Reserve. While she loses sleep to the memories of her long-lost Steve Rogers, AKA Captain America, Peggy shifts her time and energy into doing her job - only she works in an all boys club of an office filled with men who don't seem to think she has much to offer other than operating as a glorified secretary. As she bides her time, the perfect case is about to land in her lap.

It would seem that Howard Stark (Dominic Cooper - not the Roger Sterling version) has a bit of a problem. While the second world war has ended and the Nazis and the Japanese were defeated, the intervening years and lack of international conflict haven't kept Howard from creating new and potentially lethal weapons of mass destruction. When his private vault of weapons is raided, Howard becomes public enemy number one as everyone at the SSR from department head Agent Dooley (Shea Whigham) to the friendly Sousa (Enver Gjokaj) to the flashy Jack Thompson (Chad Michael Murray) believes Stark has sold his weapons to top bidders - namely the Russians. Peggy Carter and Stark's loyal butler Jarvis (James D'Arcy) are the only ones in his corner.

When Peggy is forced to withhold information from her fellow agents and team up with Jarvis, she becomes the only person capable of proving Stark's innocence. As double agents pop up and the full lethality of the projects Stark has been working on is exposed, Peggy Carter must find a way to balance her dual duties while also putting those responsible for the theft behind bars. As one dangerous weapon after another is recovered, it becomes clear that the world is not safe and that the remnants of Hydra may still lurk somewhere in the shadows. 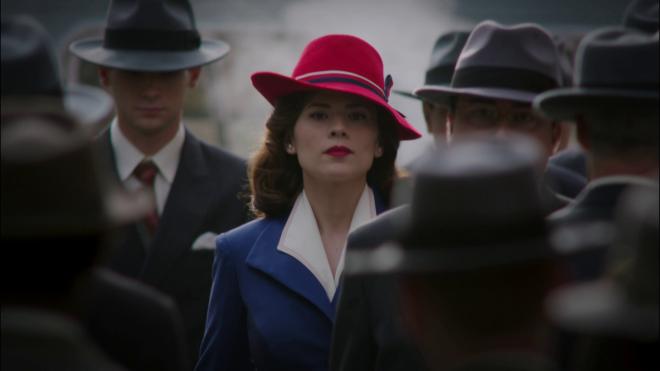 After the popularity of the 'Marvel One-Shot: Agent Carter' bonus feature popped up with the Blu-ray release of 'Iron Man 3,' fans started clamoring for more Hayley Atwell Peggie Carter action. In January 2015, they got their wish with this fantastic mini-series styled show. By moving the time period only a couple years after the events of 'Captain America: The First Avenger,' fans are treated to a fun and well-produced period action adventure series. Series creators Christopher Markus and Stephen McFee don't shy away from the fact that their show is one of the few female lead endeavors and more specifically female comic book shows on television. 2015 will see a New 'Super Girl' as well as Netflix's 'Jessica Jones,' but it isn't too much of a stretch to say that the exploits of Peggy Carter helped get the ball rolling.

The cast of 'Agent Carter' is the key to the show's success. Thankfully Hayley Atwell was a ready and willing participant, because without her in the lead this show would have crumbled. She gave Peggy a stern strength with a realistic human sensibility in 'Captain America' that having her onboard for this series was essential. Here, Hayley Atwell's Peggy Carter carries a wounded heart because she believes her one true love is dead, but through her work she finds a sense of direction and purpose. At first she's a bit standoffish, not really someone who allows herself much fun. As the show progresses, she cracks her shell a bit and is able to prove that not only is she a great female agent at the SSR, she's also an honest and loyal person and friend. All of this character development happens while she dodges bullets, throws a few punches, participates in a few high-speed car chases and outruns a massive explosion - and Atwell pulls it off perfectly. It's pretty easy to say that this 'Agent Carter' is probably one of the best female-fronted action/adventure shows since Linda Carter set the bar so high over 40 years ago.

Added to the great performance by Hayley Atwell is a fun James D'Arcy playing an awkward and proper Jarvis. Not a man of action by any sense of the word, he is still a brave individual who knows right from wrong and his loyalty to Stark is unwavering - as is his friendship to Peggy Carter. He's the perfect sidekick for a strong woman who isn't afraid to take on the bad guys. At the sides of the show, but no less important, are the rest of the SSR agents with Shea Whigham, Chad Michael Murray, and Enver Gjokaj rounding out the supporting players. Another fun performer in this little adventure is Bridget Regan as Dottie Underwood who slowly becomes Peggie's friend and confidant as well as a brief but welcome return by Neal McDonough as the badass in a bowler hat Dum-Dum Dugan.

In addition to the great casting and solid story working for 'Agent Carter' is the fact that this first season was only eight episodes long. Compare that to an average 22-episode run for 'Agents of S.H.I.E.L.D.' and it doesn't take long to see how the shorter season structure works in the favor of 'Agent Carter.' As fun as  'Agents of S.H.I.E.L.D.' can be, it is also a show that three seasons in hasn't found its sense of balance. That show is stretched entirely too thin with way too much filler episodes that don't add anything to the run or the central characters. By contrast, 'Agent Carter' is all story and character progress leaving it a lean and mean machine that doesn't spare time for frills but also doesn't skimp on the fun. It offers up some backstory tidbits for later Marvel Universe material, but the show isn't there to expand upon or setup the basis for the next 'Thor' or 'Iron Man' movie, it's there to tell its own story within a self-contained world and it works beautifully.

As season two comes close to airing, the pressure is on after the success of the first season of 'Agent Carter.' This is a show that was never boring, it never over thinks itself, and proves to be the source of eight episodes of solid comic book inspired fun. My hope is that the momentum started in this season will keep rolling and carry over into the next ten episodes that are set to start broadcasting in January 2016.

'Agent Carter' arrives on Blu-ray thanks to Disney/ABC Studios and is currently an Amazon exclusive release on Blu-ray. Pressed onto two BD50 Region Free Discs, the series is housed in a standard two-disc Blu-ray case with identical slip cover artwork. Disc one holds the first five episodes while disc two features the final three episodes and the bonus features.

'Agent Carter' makes for splendid Blu-ray viewing with this 1.78:1 1080p transfer. The image quality is practically flawless with only some sparse unconvincing CG backgrounds bringing the show down. Detail levels are immaculate allowing viewers to see and appreciate everything that went into the making of this show, from the makeup and hair to the period-accurate costuming to the backgrounds and scenery. Colors are bright and beautiful with that late 40s early 50s style pop and polish creating pleasing primaries and accurate flesh tones. Black levels, for the most part, are pretty fantastic as there are a number of scenes that take place in dark corridors and warehouses. With strong shadow separation, there is a notable sense of three-dimensional depth throughout the show. Where the image suffers is during scenes that were clearly shot in front of a green screen. These brief moments cause the image to become noticeably flatter and the black levels and colors shift making the effect all the more obvious. All around this is a near-perfect image and fans should be very happy having this show on Blu-ray.

'Agent Carter' makes the most of its impressive DTS-HD MA 5.1 audio tracks. Each episode carries a fantastic sense of balance as there are numerous talking and quiet conversational moments buttressed by large and loud action sequences. Levels are spot on so you shouldn't need to monitor your volume levels. Dialogue is crisp and clear and ensures that you're able to hear everyone. Imaging is strong with a lot of channel movement, even during the show's quieter moments. Some of the most impressive sound mixing isn't actually during the action sequences, but when Peggy enters the office through the operator station and into the bustling SSR offices. The surround channels are constantly engaged and no distortion effects were noticeable with this track.  Also included for each episode are Dolby Digital 2.0 tracks. These tracks simply don't have the same amount of pop and liveliness as the DTS tracks and feel hollow by comparison. Especially during busier sequences with a lot of movement, the Dolby tracks just don't come to life the same way. So if you want the full 'Agent Carter' experience, be sure to run the DTS tracks.

Bloopers of Agent Carter: (HD 2:55) The usual goofy stuff that happens between takes, nothing truly amazing, but still kinda funny.

'Agent Carter: The Complete First Season' is a great piece of television entertainment. Smart casting, great story telling, and a limited number of episodes, keep this show fresh and entertaining.  This is one of the best comic book shows on TV. ABC Studios/Disney via Amazon have done a decent job pulling together this Blu-ray set. With an outstanding A/V presentation, fans of the show should be very happy - unfortunately, the egregious lack of meaningful extra features knocks this score down a peg. It's still recommended, but some extras about the production of the show, costuming, casting, etc. would have made this a must own.

Sale Price 59.95
Buy Now
3rd Party 21.65
In Stock.
See what people are saying about this story or others
See Comments in Forum
Previous Next
Pre-Orders
Tomorrow's latest releases