All his life, Dan Landsman (Jack Black) has never been the cool guy. He hopes to change everything by befriending former high school hero Oliver Lawless (James Marsden) and convincing him to show up at their class reunion. However, Dan's plan hilariously backfires as the unpredictable Oliver proceeds to take over his home, career and entire life.

If we all think back to our halcyon high school days, it's a pretty good bet we all knew someone like Dan Landsman, a good-natured, well-meaning, but altogether insufferable nebbish who marched to the beat of a different drummer and, hard as he tried, just couldn't fit in. Guys like Dan often go on to lead happy, fruitful, well-adjusted lives, but the scars of ostracism run deep, and even though our high school pecking order doesn't matter a damn in life's grand scheme, that deep-seeded desire for acceptance and validation often manifests itself far into adulthood. Despite marriage to the devoted Stacey (Kathryn Hahn), a couple of kids, a nice house in suburban Pittsburgh, and a decent job with a homespun consulting firm run by the technologically challenged Bill Shurmur (Jeffrey Tambor), Dan (Jack Black) has never vanquished his teenage demons, all of which rise to the surface when he decides to head up his high school's 20th reunion committee.

Apathy reigns supreme among Dan's classmates, most of whom have moved on and would rather swim with sharks than take a cringe-inducing walk down memory lane, especially when Dan is the event's chief ambassador. Just like in the old days, blatant disdain (or worse, a lack of recognition) greet his cheerful telephone overtures, and the inevitable brush-off is often peppered by a below-the-belt rebuke. ("I don't think I still suck," Dan replies to one of the rude alumni.) Feeling insignificant, ignored, and invisible (even his fellow committee members keep their distance), a despondent Dan has an epiphany one night when he spots Grant Barklidge High's knight in shining armor, the hunky Oliver Lawless (James Marsden), hawking Banana Boat sunscreen in a sexy, 'Baywatch'-esque TV commercial. Dan believes if he can somehow convince the esteemed, Sir Lancelot-like Lawless to come to the reunion, all the other alums will fall in line and he'll finally reverse his reputation, climb to the top of the high school food chain, and at last earn the respect and adulation he's so desperately and ceaselessly craved. The only problem is he and Oliver were never friends, and the self-absorbed stud doesn't even know who Dan is.

The best moments of 'The D Train' transpire during these early stages, where we feel Dan's pain, but also recognize the annoying qualities that alienate his reluctant cohorts. Black's inimitable personality and high-energy antics, shaded by a well-pitched, sad-sack sensitivity, shine through, and his chemistry with the perfectly cast Hahn perks up the material, which - thanks to the universality of high school - is instantly identifiable. Yet in the blink of an eye, first-time directors Andrew Mogel and Jarrad Paul (who also collaborated on the script) steer 'The D Train' off its comfortable, entertaining path into uncharted territory, and transform what we believe to be an amiable bromance into a dark exploration of insecurity, jealousy, and betrayal. It's still funny at times, but unlike most edgy black comedies, the humor takes a back seat to emotional angst.

When Dan finally meets Oliver, he discovers the ripped adonis is a free-spirited bisexual who's "not into labels," lives in a dumpy apartment, and flies by the seat of his pants. His glamorous high school image, however, still dazzles Dan, who instantly puts him on a pedestal, envies his sexual prowess and devil-may-care attitude, and longs to be one of his homies. The two pal around Hollywood, bump into Dermot Mulroney (whom Oliver pretends he knows), get drunk, go to a strip club, snort some cocaine, and enjoy a wild night on the town. Oliver exposes some of his doubts and personal frailties, and Dan, like a loyal lapdog, dutifully strokes his ego, telling him that if he attends the reunion he'll be giving his forgotten former cronies "a gift that they'll remember for the rest of their pathetic lives." As the hours tick by, the two form a tenuous connection that Dan's twisted mind inflates into a full-blown bromance. But how far will Dan go to bond with Oliver, become one of his boys, and gain a coveted spot in the in crowd? A lot farther than most heterosexual men, that's for sure!

That far? Really? Yes, really. And that's where 'The D Train' loses us, going down a shock-for-shock's-sake path that never rings true and induces far more incredulous head-shakes and awkward reactions than laughs.

Many of us can easily relate to Dan's innocent man-crush, as well as his desire to bask in the aura of a great-looking, confident guy who seems to have it all. (They called it hero worship in my day.) And it's understandable that Dan, who's never had a deep, meaningful friendship with another dude, would turn a blind eye to his idol's faults. 'I Love You, Man' (one of my favorite comedies) covers the same territory with humor, heart, warmth, and just enough immature raunch to engender plenty of guffaws, but 'The D Train' pushes the envelope too far, changing the film's timbre too severely and betraying its main character by thrusting him into an out-of-control, unbelievable scenario that can yield no plausible resolution. 'I Love You, Man' is silly, but beneath the gags there's an underlying truth that resonates. 'The D Train' takes itself far more seriously, but its drama hinges on a plot device that comes out of left field.

Comedies, especially black ones, require realistic hooks that allow us to find dark situations funny. The darkness here is Dan's obsession with Oliver, his unquenchable craving for attention, and the lengths to which he'll go to get it. Inject those twisted elements into a platonic relationship and they're relatable, but add a totally unnecessary sexual element between two guys and, for most of us, they're not. If Dan's sexual awakening were the point of the movie that would be one thing, but it's not, so the hook-up only diffuses the film's focus instead of crystallizing it. While I applaud Mogel and Paul's audacity, they obviously didn't look before they leapt, and as a result, their film crashes and burns.

Which is a shame, because 'The D Train' could have been a sweet, engaging tale of personal evolution, acceptance, and the realization that perceptions often can be false. The ingredients of a winning motion picture are all there, but by trying to add that dash of hot sauce to titillate the audience, Mogel and Paul ruin their dish. Black, Marsden, Hahn, and Tambor all file good performances, but they become casualties of a misguided script. There's absolutely no reason why these guys need to have sex, and the film would be funnier and more meaningful if they didn't.

Sometimes when a film makes you squirm it's because it strikes a raw nerve, but in the case of 'The D Train' it's because the story is so implausible, even within the comic realm. It's as if the writers created characters to fit what they perceived to be a dynamite premise, instead of the other way around. That's a rookie mistake and fatal error, and that's why 'The D Train' comes close to being a train wreck. 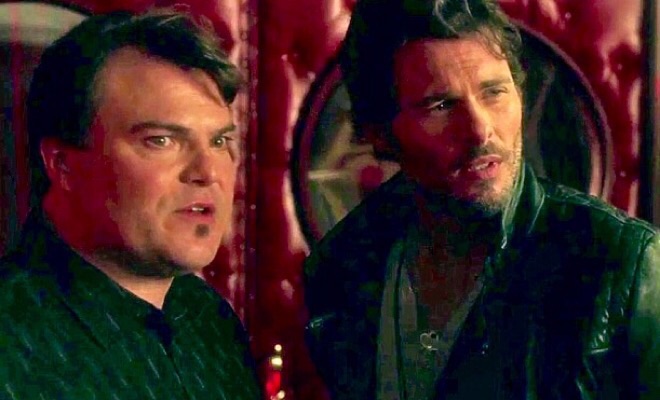 'The D Train' arrives on Blu-ray packaged in a standard case. Video codec is 1080p/AVC MPEG-4 and audio is DTS-HD Master Audio 5.1. Once the disc is inserted into the player, the static menu without music immediately pops up; no previews or promos precede it.

A crisp, clean transfer disguises the down-and-dirty elements that distinguish and ultimately sabotage 'The D Train.' The 1080p/AVC MPEG-4 rendering from Paramount features solid contrast, bold colors, and excellent detail levels. Just a hint of grain adds a smattering of texture to the image, enhancing the feel of fabrics and upholsteries, and a warm glow permeates the overall presentation. Black levels are rich enough, primary hues add a touch of visual pop, and flesh tones remain stable and natural looking throughout. Razor sharp close-ups highlight Marsden's facial stubble and chiseled features, but background elements are equally easy to discern. Shadow delineation is quite good, no instances of crush could be detected, and no banding, noise, or pixelation disrupt the picture's purity. Though the story leaves something to be desired, this transfer is a pleasure to watch from start to finish.

Some robust bass adds some potency to the DTS-HD Master Audio 5.1 track, which benefits from heightened fidelity, subtle shadings, and a pleasing fullness of tone. Surround activity is limited, but a few distinct moments of directionality widen the soundscape, and solid ambience lends the audio a more enveloping feel. The soundtrack tunes fill the room with ease, but dialogue really drives 'The D Train,' and all conversations are clear and easy to comprehend. No distortion creeps into the mix, and no surface defects disrupt the smooth ride. Though far from a spectacular track, the workmanlike audio is more than sufficient and serves the film well.

Just a couple of supplements flesh out the disc.

A run-of-the-mill comedy with uncomfortably dark undertones, 'The D Train' starts out well but ends up a disjointed, somewhat creepy character study that's lightened by a few amusing moments. Though first-rate performances from Jack Black, James Marsden, Kathryn Hahn, and Jeffrey Tambor help bolster this story of a high school loser who sells his soul to become one of the in crowd at his 20th reunion, a second-rate script often sucks the wind out of the film's sails. The longer it goes on, the more of a mess it becomes, and like the impulsive encounter that derails 'The D Train' about a third of the way through, the movie leaves a sour aftertaste. Paramount's Blu-ray presentation features solid video and audio transfers, but only a couple of paltry extras. Those hoping for another 'School of Rock' will be sorely disappointed, and unless you're a diehard Jack Black fan, you should probably let 'The D Train' pass you by.

Sale Price 10
Buy Now
3rd Party 3
In Stock.
See what people are saying about this story or others
See Comments in Forum
Previous Next
Pre-Orders
Tomorrow's latest releases