As far as spin-off movies go, 'Minions' isn't a terrible movie, but it's neither as good as it could've, would've, or should've been. Aside from a few elated moments that at best yield some mild chuckles, the little yellow anomalies of nature could have easily fallen flat on their faces trying to piggyback on the success of the two 'Despicable Me' films — a plan that worked out perfectly since it went on to become one of this year's biggest box office grosses. And the small curious creatures do fall on various occasions; however, they're literally for laughs, the sort of pratfalls where they land on their silly, shiny goggles. On a more figurative level, three minions in particular — named Kevin, Stuart and Bob — stumble, blunder, trip and crash from one scene to the scene, but they manage to stay on their tiny feet somehow — mostly out of contrivance and sheer luck — while on their fixated pursuit to find the world's most villainous, diabolical and most despicable criminal mastermind.

The realization that the banana-loving critters are ultimately not up to the challenge of setting off on their own and poised for world domination isn't apparent from the start. In fact, the opening credit sequence — like a 2D animated short reminiscent of groovy 1960s cartoons and art — establishes a bouncy and enthusiastic tone that promises more such creative visual delights. While The Turtles' rock classic "Happy Together" plays loudly overhead, audiences enjoy the evolution of the minions — so, creationists beware — from single-celled organisms to creatures that are apparently programmed in their DNA to only serve the most nefarious of villains. Geoffrey Rush's narration, then, proceeds to provide some exposition of their history, with the funniest bits involving an unfortunate caveman and a brief glimpse at Napoleon's downfall. Giving up hope of finding the perfect master, the entire yellow clan ends up in a remote cave in Antarctica.

It's during this time the movie as a whole slows down somewhat, perhaps to complement the way the minions themselves feel about their hopeless isolation, surviving without a sense of purpose and meaning. To be sure, the filmmakers make a strong effort to continue the laughs before singling out our aforementioned pintsized heroes and their quest of finding the world's greatest supervillain. However, it's here, which is pretty early on in a feature that's expected to run another 85 minutes, it becomes evident the overall humor is not up to par with its predecessor with jokes that are more targeted to the youngest in the crowd than the parents. Again, there is an effort to keep adults invested with a variety of gags and quirky references — the heartiest laugh coming when mildly rebellious teenage Stuart does his own rendition of the song "Hair" from the musical and turns a trio of the Queen's Guards into head-banging rockers with long, shining, gleaming, beautiful hair. 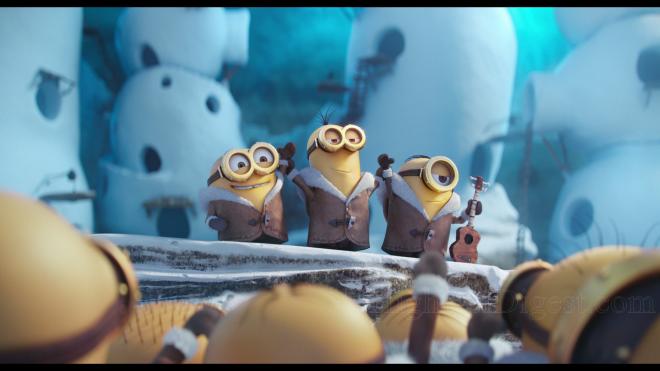 Such silly cracks are abundant throughout — the sequence with Michael Keaton and Allison Janney as the head of a bank-robbing family giving the three minions a ride to Orlando, Florida for a supervillain convention is a genuinely fun highlight. Regrettably, they are mostly slight and fairly trivial wisecracks that make the overall narrative feel episodic rather a consistent natural progression to the inevitable conclusion where our yellow whatever-they-are creatures encounter Gru. When Sandra Bullock enters the picture as Scarlet Overkill, a name obviously meant with a humorous double-meaning, Brian Lynch's script attempts to set the minion's misadventures in New York and London with some semblance of a designed structure by having Scarlet order the little guys steal the Queen's crown. But Bullock's presence is just another check mark on a list towards a happy ending while Jon Hamm, as her evil inventor husband Herb, delivers more amusement that she does.

When it's all said and done, 'Minions' fails to match the level of fun and silliness as its two predecessors, focusing entirely on the their incompetence inadvertently finding them in one harrowing situation after another. And it's all for the sake of reaching an obvious conclusion that somehow isn't as funny or satisfying as one would expect. The little yellow creatures are best served in small doses, as the comic relief in the background supporting a larger whole, not as a full-length feature all to themselves. Then again, the filmmakers' intended target audience is quite apparent from an early start, and the adult fans of the 'Despicable Me' films are not really it. Full of bright, vivid colors and lots of high energy visuals, the prequel is ultimately for the youngest among us, and from that perspective, I would imagine the animated picture is a laugh-a-minute riot. And the few gags for mom and dad are probably just enough to have them enjoy it with the kids.

Universal Studios Home Entertainment brings 'Minions' to Blu-ray as a two-disc combo pack with an UltraViolet Digital Copy. A Region Free, BD50 disc sit comfortably opposite a DVD-9 copy of the movie. Both are housed inside a standard blue keepcase with a glossy, shiny slipcover. After a few skippable trailers, viewers are taken to the usual menu options with full-motion clips and music.

The minions step out of the shadows of their despicable masters with an astounding, reference-quality 1080p/AVC MPEG-4 encode that's sure to please everyone, especially the little tykes to whom this movie is geared towards.

Presented in its original 1.85:1 aspect ratio, the image arrives with razor-sharp detailing in every scene, from the complex stitching in the minion's blue overalls to the intricate, minute specifics in St. Edward's Crown. When our three pintsized heroes leave their Antarctic cave for the first time, viewers will be amazed at the level of detail that went into their life-like leather jackets and the individual hairs in the fur collars. The tiniest, miniscule pot mark, indentation and depression in the stone blocks of the Queen's castle are plainly visible, and the smallest trinket inside Scarlet's hideout is just as clean and distinct as anything in the foreground. The video also comes with a sumptuous array of rich, vibrant colors that pop from the screen and fill the entire landscape with brilliance and a high-spirited energy. With spot-on contrast and luxurious, deep blacks everywhere, the cutest henchmen the world has ever seen clumsily find home and destined place in the universe on Blu-ray.

As the first animated children's movie to be honored with a Dolby Atmos soundtrack, 'Minions' unfortunately leave listeners with a good deal to be desired. Don't get me wrong, the yellow mini bad guys put on a delightfully amusing and fun-filled show, but their quest for an evil mastermind to serve isn't really the action-packed sort to make best use or take advantage of the object-based format. For the most part, ceiling channels are silent throughout with some very minor, near imperceptible atmospherics that sadly fail to immersive the viewer. At best, the design offers a few amusing panning effects, such as when Scarlet flies overhead, or as a fill during certain scenes, like an off-screen loudspeaker inside the mall. In the end, the score and song selections ultimately benefit as they spread into the front heights to create a generally gratifying, half-dome wall of sound.

For those not equipped with an Atmos system, the 7.1 Dolby TrueHD soundtrack will be more than satisfied with the mix as the animated prequel seems to occupy a wider sense of space, filling the entire soundscape with energy and a variety of activity. With excellent directionality to create a wonderfully satisfying and immersive soundfield, the rears are often employed with excellent discreteness and panning. Although much of the design is a front-heavy presentation, the back of the room is continuously kept active with subtle atmospherics, from the cheers and jeers of the crowd to Scarlet zipping from one side to the other. Imaging feels broad and welcoming with a great deal of warmth and superb fidelity while well-balanced channel separation delivers various convincing off-screen effects, and vocals are distinct and precise in the center. Crisp, detailed dynamics provide superb clarity to the loudest sequences as well as to the quietest, whispered moments, and the low-end is robust and surprisingly potent, providing each song with a pulsating beat and every action scene with palpable weight (bass chart).

Although not altogether a bad movie, 'Minions' is unfortunately not that great either, compared to its two more entertaining predecessors. However, that's not say younger viewers, the true intended audience, won't better appreciate the little yellow creatures' misadventures to find and serve the most villainous, diabolical and most despicable criminal mastermind the world has ever known. On the other hand, the Blu-ray nice arrives with excellent, demo-worthy picture and a generally satisfying Atmos audio presentation. With a collection of supplements to boot, the overall package is sure to please the little tykes in the family and satisfy parents with the purchase.

Sale Price 7.95
Buy Now
3rd Party 3.96
In Stock.
See what people are saying about this story or others
See Comments in Forum
Previous Next
Pre-Orders
Tomorrow's latest releases