A phobic con artist and his protégé are on the verge of pulling off a lucrative swindle when the former's teenage daughter arrives unexpectedly.

Though it received no Oscar nominations back in 2003, 'Matchstick Men,' director Ridley Scott's superb comedy-drama-caper deserved several nods, for rarely does a film span so many genres with such seamless ease. And while it may be fitting that a movie about con artists keeps its audience continually surprised and suspicious, Scott makes sure the story's emotional core remains honest and relatable throughout. Yes, we enjoy the plot's twists and turns, but it's the characters of 'Matchstick Men' that rivet our attention and make it a terrifically entertaining and memorable film.

From the opening frames, Scott draws us into the obsessive-compulsive world of Roy Waller (Nicolas Cage), a small-time swindler who lives in tortured but comfortable solitude in a modest, ranch-style home in suburban L.A. A neat freak to the nth degree whose trusty Windex bottle is seldom out of reach, Roy is a prisoner of his routines, manias, and insecurities. He constantly cleans his immaculate house, pouncing on the tiniest errant crumb, and is so afraid of germs he slips on rubber gloves prior to handling an empty tuna can, which he encases in a fresh Ziploc bag before tossing in the garbage. For Roy, just being himself is an agonizing chore — with facial ticks and hesitant speech patterns hampering his attempts to live normally — but at work, he role-plays, and submerging his persona in a foreign guise usually calms his anxieties.

Roy and his partner Frank (Sam Rockwell) specialize in phone scams aimed at the gullible elderly, but when one of Roy's phobias almost blows their cover, Frank suggests he seek help for his crippling disorders. Reluctantly, Roy visits Dr. Klein (Bruce Altman), a sympathetic shrink who not only replaces the prescription drugs Roy accidentally spilled down the drain, but also coaxes him to open up about his failed marriage and the unborn child he abandoned almost 15 years before. Dr. Klein helps Roy contact his daughter, Angela (Alison Lohman), and arranges a meeting. Although the mechanics of human interaction come awkwardly to Roy, he and the rebellious, live-wire Angela slowly begin to bond, and (shades of 'Léon: The Professional') she hopes to learn about and participate in his work.

As a thank-you to his partner (and former pupil), Roy decides to pursue a big farewell score that should net a hefty enough chunk of change to allow him and Frank to retire. Their mark is the burly and shady Chuck Frechette (Bruce McGill), but Angela's involvement distracts and weakens Roy, making the con more dangerous and messy. Ah, the joys of parenthood.

Scott's superior talent and inventive style makes film-watching a joy, and his creative eye and flawless sense of timing and rhythm add wonderful texture to 'Matchstick Men.' The use of jump cuts and jagged edits accentuate Roy's condition, while keeping the audience off-kilter. Yet Scott's dazzling technique doesn't overwhelm the movie or prevent viewers from absorbing the nuances of Ted and Nicholas Griffin's clever, wry script. Scott strikes just the right balance, taking his cues from the characters, and achieves a smooth, effortless flow that appeals to fans of both fine filmmaking and storytelling.

Over the years, Cage has created a gallery of quirky characters, but Roy stands apart as one of his best portrayals. The actor once again surrenders to his role, and though it would be easy to coast on the showy aspects of Roy's outward infirmities, Cage doesn't neglect the inner turmoil and blossoming emotions that are such an integral part of the film's (and Roy's) subtext. As much fun as it is to watch Scott weave his directorial magic, it's equally entertaining to witness Cage craft moments, and he maximizes countless opportunities in this film. Like De Niro, Pacino, Streep, and Nicholson, Cage gets tremendous mileage out of a raised eyebrow or wistful smile, and his basset hound eyes add a sadness and sensitivity to Roy that make us identify with and root for him throughout.

His interaction with Lohman is especially endearing, and the 24-year-old actress amazingly transforms herself into a young teen. She pouts, cajoles, and manipulates to perfection, while also displaying a soft, vulnerable side that easily seduces Roy and the audience. Rockwell brings tremendous energy to the fast-talking Frank, and his breezy performance belies his character's complexities.

'Matchstick Men' succeeds on multiple levels, juggling cons and neuroses with simple human relationships and frailties. Its vivid characters supply a sturdy framework for the engaging story, which masterfully strings us along and keeps us guessing right up until the end. Touching and entertaining, visually creative and brilliantly acted, 'Matchstick Men' celebrates the artistry of Scott and Cage, and ranks up there with each man’s best efforts. 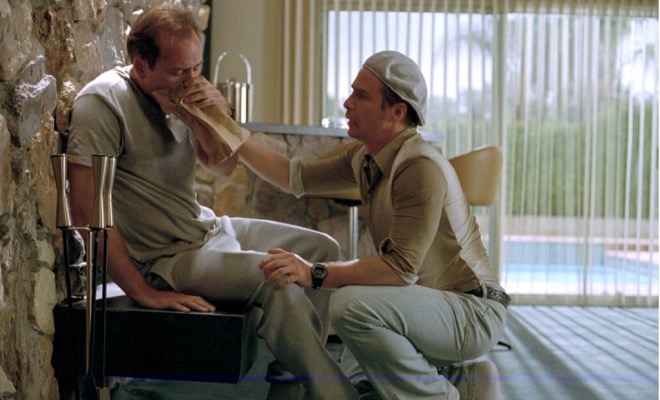 'Matchstick Men' arrives on Blu-ray packaged in a standard case. Video codec is 1080p/AVC MPEG-4 and default audio is DTS-HD Master Audio 5.1. Once the disc is inserted into the player, the static menu with music immediately pops up; no previews or promos precede it.

A film about an obsessive-compulsive neat freak demands a crisp, spotless rendering and Warner delivers in spades with an antiseptically clean 1080p/AVC MPEG-4 transfer that's distinguished by sharp lines, lush colors, and rich black levels. Just like the 2004 DVD, clarity, contrast, and shadow detail are excellent, and such tricky elements as Venetian blinds and rippling pool water never shimmer or break down. Reflections are crisp, close-ups highlight fine facial features well, and just a hint of grain lends the image essential texture. Though the overall palette may be muted, colors still pop and rich black levels add welcome weight to the picture. No banding, noise, or pixelation disrupt the presentation, and no digital enhancements could be detected. While this may not be a perfect transfer, it's darn close, and no imperfections ever distract from the utterly absorbing action on screen.

Warner has upgraded the DVD's Dolby Digital track to DTS-HD Master Audio 5.1, which better highlights the subtle but distinct use of multi-channel sound. Ambient effects quietly dance across the front speakers, while Hans Zimmer's creative and complementary score envelops with ease. All the old standards, from Bobby Darin's terrific rendition of 'The Good Life' (performed over the opening titles) to Frank Sinatra's classic 'Summer Wind,' burst with fidelity and tonal depth, and such accents as Cage's stocking feet brushing across the carpet, tire screeching, and fisticuffs make a palpable sonic statement. Dialogue is always clear and easy to understand, and the soundtrack works hand-in-hand with the rapid-fire edits to produce an exciting and involving audio experience.

All the extras, with the exception of the 'Matchstick Men' original soundtrack CD, have been ported over from the 2004 DVD release. While far from bountiful, the material is worthwhile and absorbing.

The talented Mr. Ridley Scott scores again with this marvelous, richly textured film that cinema buffs, acting aficionados, and those who just love a damn good story will want to play over and over again. Nicolas Cage files one of his finest performances, and Sam Rockwell and Alison Lohman make notable impressions. Warner's Blu-ray presentation features excellent video and audio transfers and a fine crop of intelligent, well-produced extras. 'Matchstick Men' may not be one of Scott's most famous films, but it's a marvelous, beautifully crafted gem that earns a high and hearty recommendation. And that's no con.

Sale Price 9.99
List Price 14.98
Buy Now
3rd Party 5.7
In Stock.
See what people are saying about this story or others
See Comments in Forum
Previous Next
Pre-Orders
Tomorrow's latest releases