A retired CIA agent is recruited to participate in a prisoner exchange with the Russians.

Some films are defined by their time and place in the events of world history. Part of the reason the post fall of the Soviet Union Jack Ryan adventures of late for instance haven't worked as well as they used to is because there isn't a "Soviet Union" to be against any longer. The Russians were convenient bad guys because of communism and the Red Menace. That meant spies were everywhere, our side versus theirs, and the entertaining super secret adventures that happened on movie screens as a result. Without the evil Russians, there has been a notable villain gap. Nicholas Meyer writes and directs 'Company Business,' a post fall of the Berlin Wall espionage thriller that knows how to have fun while also being the source of some solid suspense.

Retirement for former CIA Agent Sam Boyd (Gene Hackman) was supposed to be lounge chairs and beach drinks - except he gets bored very easily. That's why he took a job to do a little corporate espionage to find out if a makeup company's super-secret formulas had been ripped off. As he quickly learns, his old tactics aren't nearly as effective as the ones used in a modern era, but he gets the job done none the less. Which is exactly why his former employers need him back on the job one last time.

It turns out now that the infamous Berlin Wall is down, Russia is willing to make a swap for a highly valued prisoner for one of theirs - and about $2,000,000 in U.S. currency. Sensing the Russians desperation, Sam's former boss Elliot Jaffe (Kurtwood Smith) needs a guy he can trust, a guy he knows will get the job done. That's why Sam is sitting in a highly secured briefing room with Jaffe, a drug cartel boss who is willing to put up the cash so that the good U.S. taxpayers won't have to, as well as the shady Colonial Grissom (Terry O'Quinn) who seems to have an unexpressed interest in this prisoner exchange.

All Sam has to do is gather up Pyotr Ivanovich Grushenko (Mikhail Baryshnikov) from Federal Prison, get the man to West Berlin, and make the swap. Easy as pie. Or at least it should have, but when Sam recognizes the man posing as an American pilot for the exchange, he instantly smells a rat and breaks the deal forcing himself as well as Grushenko to go on the run. With their outdated form of tradecraft at their disposal, Sam and Grushenko will have to use all of the means left to them to survive and shed some light on the larger conspiracy that has both the KGB and the CIA hunting them down. 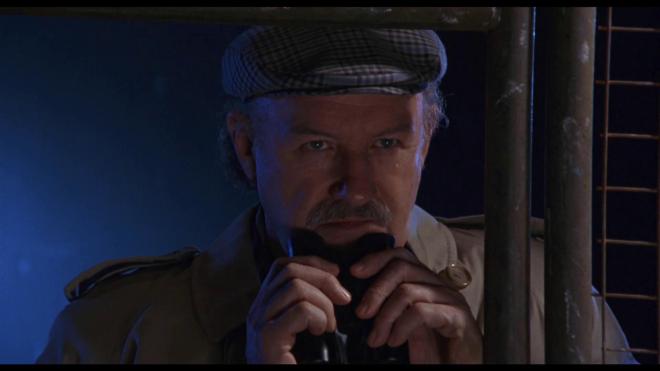 A lot was going on in world politics in 1991 and 'Company Business' feels like a movie that had to do a lot of adjusting to fit the current climate. It's a film that plays like a spy thriller when there really aren't any more spies. Can someone be a double agent anymore when their enemy or their original government of employment no longer exists? As time marches on and old empires fall and new ones rise, the people are the only constant. That's part of what makes Hackman's Sam and Baryshnikov's Pyotr such a fun dynamic. These guys would have been at each other's throats ten or fifteen years earlier but because of the changing winds on the geopolitical stage, they make fantastic allies.

Where 'Company Business' works well is with its sly use of humor. The situation at hand is life and death serious, but the situations Sam and Pyotr find themselves stuck in also has a nice tinge of ironic humor. Hiding out in a drag cabaret because the old homophobic standards of a KGB or CIA agent still applied in 1991. Flash forward 24 years to today and this joke may not play so well. Other bits of humor like trusting an ancient former Nazi document forget for new ID cards, or how the CIA believes Sam would absolutely shave his mustache to change his appearance because that's what spies do, but the thought that he'd keep it for that very reason doesn't even occur to them provides a couple moments of logic-based humor.

This whole movie sticks together because the relationship between Hackman and Baryshnikov is so strong. These guys never try to overshadow each other. They play as equals and their portrayals of men of a dying industry can actually be rather heartfelt. They know the situation at hand is dangerous and threatens their lives, but it's also their last shot at the greater glory they were originally trained for in the first place. As great as Hackman and Baryshnikov are in their respective roles, it's the side performances from guys like Terry O'Quinn and Kurtwood Smith as well as the late great Daniel von Bargen as a CIA agent you don't quite trust are the actors that really add a lot to the film's flavor. These guys are all great and as soon as you hear their very familiar voices, it's hard not to get a little excited when they pop up on screen.

Is 'Company Business' a great spy thriller? Maybe not a great one, but it is a darn good bit of fun. Even though it was very current for its era, it also feels like a bit of a throwback to a time when espionage didn't involve the internet and hacking the bad guy's computer system using overly complicated visuals and techno jargon no one understands or is so goofy that nobody believes. Give this one a spin, it's a solid ride from start to finish.

'Company Business' makes its Blu-ray debut thanks to Kino Lorber and their Studio Classics line pressed on a Region A locked BD25 disc. Housed in a standard case, the disc opens directly to the main menu.

For a film of this vintage I wasn't expecting all that much from the transfer for 'Company Business' but the film's 1.85:1 1080p image is quite pleasing to the eye. Fine film grain has been retained leading to some fantastic detail levels. Print damage is minimal. Shot throughout Paris and Berlin, the film makes great use of its European locations and the sights come through with terrific clarity, as do facial features and clothing details. Colors are bright and vibrant and provide plenty of primary pop while also keeping some of the richer hues in check to maintain that earthy-looking spy thriller vibe. Black levels are spot on here as blacks are appropriately inky and shadows offer enough separation that the image rarely, if ever, dips into crush. There doesn't appear to be any apparent use of DNR or image smoothing technology, nor does there appear to be any problematic compression issues worth mentioning. For a budget release, 'Company Business' looks pretty darn good.

'Company Business' gets a lot of extra oomph out of its English DTS-HD MA 2.0 audio track. For starters, the imaging for this audio track is actually quite strong. Considering the film's age and the fact that this is only a stereo track, the sound effects have a pleasing way of filling up the space within a scene without being too loud or overpowering. The majority of the movie is actually very conversational and contemplative as Sam and Pyotr walk down the vacant streets; their footsteps have a resonate echoing to them that feels like it travels away. Just one of the nice subtleties I noticed while reviewing this film. The film's levels are the only real problem spot here as the track is well balanced for the most part, but when it shifts from a conversation to an action beat, I did have to adjust the volume to adjust for the swing.Without any hiss, pop, or audio breaks, this track is in overall great shape and makes a fine debut to Blu-ray.

Our Country Tis Of We Featurette: (SD 6:35) A nice piece of archive bonus material that is fun in a silly sort of way. Feels very EPK but still good.

Steven-Charles Jaffe Sound Bites: (SD 1:43) Additional interview footage. It's interesting to see his perspective because they were influenced by real life events.

Selected B-Rolls: (SD 4:06) this is mostly on the set footage from various scenes throughout the film.

Company Business Trailer: (SD 2:02) A fun trailer that really sets the Action/Comedy tone of the film.

The Package Trailer: (SD 2:18) A solid trailer for a pretty great thriller. Makes me want to watch this one again.

Before starting up 'Company Business,' I only knew that I would be getting a 1990s Gene Hackman in a spy thriller of some sort. The movie certainly lives up to that expectation, but it also brings some of the better elements of a buddy cop movie to make the film feel lively and fresh. I had a lot of fun with this flick. Kino Lorber has done a great job bringing the film to Blu-ray with a strong A/V presentation and some nice archive extras as well. If you're in need of a solid action flick, 'Company Business' should satisfy your craving. Recommended.