Carol inherits a night club from her weird uncle. She moves into the place, only to find out just how weird her uncle really was. She begins to remember more about her very special relationship with her uncle as she battles her memories and her surroundings in her new home.

Where Superheroes and their evil ultra-villain counterparts seem to be the current dominating cinematic genre, the early 1980s and 1990s seemed to have been defined by the psychological thriller. Dozens of films from the 80s on through the mid-1990s jockeyed for box office dominance. When you have films like 'The Silence of the Lambs' winning the Grand Slam of oscars for Writer, Director, Actor, Actress, and Best Picture, as well as other features like 'Malice' and 'Basic Instinct' drawing in top talent and a cadre of film goers, the psychological thriller was in fine stride. 1989 saw the release of Matthew Chapman's 'Heart of Midnight' as an early entry to the madness that was to come. Starring Jennifer Jason leigh, the film works on most levels while showcasing some incredible talent from its leading lady.

The line between sanity and madness has always been a thin one for poor Carol (Jennifer Jason Leigh). After being released from a hospital for psychological issues, Carol has inherited her late Uncle Fletcher's nightclub called The Midnight. Since the property was already being renovated at the time of her late uncle's passing, Carol has the perfect opportunity on her hands to reboot her life and get things back on track and carve out a future for herself. The Midnight offers Carol a number of great opportunities, not only can she live on the property, but she can also redesign the club to be what she wants. Especially when a hidden wall reveals the darker side of Uncle Fletcher's club; a place where people can get anything and do anything they want, no matter how untoward.

Rather than it being some sort of neon-lit trendy night spot with secret walls and a dark history, Carol envisions the place to be a sultry throwback to the heyday of 1930s jazz, filled with live music and that special kind of close comfort dancing. The only problem Carol seems to have is getting the carpenters to listen to her. No one takes Carol seriously and that becomes especially problematic when some of the men working on the club attack her and nearly rape her. While she narrowly escaped the trauma of such an attack, the police don't really buy her story - at least not 100%. The problem is Carol has a long history of embellishing stories of sexual assaults so it makes proving a case against these men a tad difficult for Detective Ledray (Frank Stallone), but they're going to do their best. In the meantime, another investigator, a man known as Sharpe (Peter Coyote) will be handling her case.

At first Sharpe is somewhat belligerent towards Carol and her plight. After all she's the niece of a man whose club invited a rather unsavory element into the town. Right away Sharpe may not be the best man for the job as he seems to have a specific axe to grind, however, he's also the only one who believes Carol when things start to go bump in the night. At first Carol thinks she's losing her mind when she hears loud thumps and bumps coming from the ceiling and below the floors - but when her friend Mariana (Denise Dumont) as well as Sharpe, hear the noises and experience strange occurrences, it becomes all too clear that the late Uncle Fletcher may have a few skeletons left in his closets. 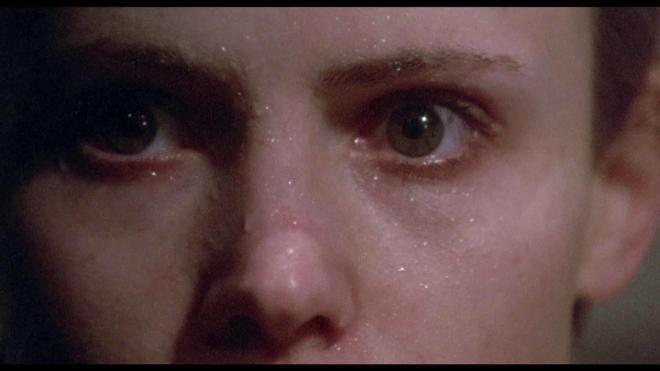 All around 'Heart of Midnight' may not be the best psychological thriller or sexual thriller for that matter, but it's a pretty solid effort. Less of a sexual thriller - even though the film dabbles in those themes - 'Heart of Midnight' works better as a modernized version of 'Gaslight.' The slightly unhinged Carol who has a few demons of her own to pass is tormented into near insanity by an unseen person or force. Are the things happening to her real? Or could the strange thumping sounds be a part of her over-active imagination? By being somewhat vague on these terms, writer and director Matthew Chapman's little flick works fairly well. I've always thought Chapman was a great concept writer, he could cook up the framework for a solid thriller that should entertain, but when it comes to the finer plot details, he needed a better story architect to draw up those blueprints. Movies like 'Color of Night' and 'Consenting Adults' for example fall into that trap where a film was made with a great idea but didn't quite live up to the premise. 'Heart of Midnight' works well enough that it avoids the plot traps those other films fell into.

Where 'Heart of Midnight' rises and falls is based entirely on the commitment of its cast, in particular, lead actress Jennifer Jason Leigh. Since she's in virtually every scene of the film, she carries a lot of the weight of a character whose level of sanity isn't always clearly defined. She's a woman with a sad past that she's trying to move on from, and as much as she tries to convince herself that she's okay, she doesn't exactly believe her own sanity even when the proof if looking her right in the face. To that effect, Peter Coyote deserves a lot of credit as Sharpe. His isn't the most subtle of characters as in his first appearance he all but screams that his character is hiding something, but Coyote manages to infuse the role with some finesse and just enough charisma to make him feel like a comforting presence while also offering up the right amount of potential menace.

Is 'Heart of Midnight' a knock-it-out-of-the-park home run edge of your seat thriller? Not quite. In fact, it's actually a rather languid slow burn, but when the film picks up some second act momentum it chugs along at a nice clip and is never boring. I liked that I never felt like I was ahead of the film, even when the film itself is being less than subtle about what is happening. My only real gripe has to do with some of the side characters, namely Detective Ledray and his fellow cops. They're supposed to be pretty smart guys, but even the most basic questions they should ask aren't asked and if they wanted to do good police work, they should have asked some of those questions. However, if they'd done their due diligence work, one of the films bigger plot reveals wouldn't have worked. All around a decent late 80s thriller that's worth a viewing or two.

'Heart of Midnight' arrives on Blu-ray thanks to Kino Lorber and their Studio Classics line and is pressed on a Region A locked BD25 disc. Housed in a standard case, the disc opens to a static main menu.

Working from a transfer supplied by Fox/MGM, Kino has done a solid job bringing this 1.85:1 1080p transfer of 'Heart of Midnight' to life. Some will look at this as a negative, but I'm actually glad to see that the film's grain structure is pronounced and present throughout most of the film's 93-minute runtime. Detail levels are all around crisp and clean, even when there is an abundance of dream-like haziness being employed. Colors appear bright and even - especially primaries like red and blue. Flesh tones appear accurate and healthy overall, maybe pushed slightly into the pinks, but overall everyone in the film looks fine. Black levels are also richly inky leading to a nice sense of depth. There are a few moments where crush seeps in and others where it feels like contrast has been kicked up a notch where sometimes whites can give off a noticeable bloom that can appear and disappear from shot to shot. Not a horrible effect, but like I said, it's noticeable. For a deep catalogue release, this is a pretty fine transfer that gets the job done.

Working with a DTS-HD MA 2.0 track, 'Heart of Midnight' gets a lot of essential auditory nuance. Audio elements are a critical story aspect here, from the thumps and bumps Carol hears to the nightmarish score by Yanni, the audio always feels alive and present. Even with the score can sound a bit too much like Goblin's score for 'Suspiria,' the audio remains in balance and it's never a struggle to hear the dialogue, or any of the sound effects. Imaging is relatively flat as there just isn't much in the way of channel movement since the geometry of the confined sets regulated sound to come directly at the screen. The most notable moments where any kind of directionality is present is whenever Carol hears a strange sound or starts to dip into her psychosis. It's easy to say that this isn't the best audio track ever to reach Blu-ray, but at the same time it works for this film and this particular release.

Audio Commentary: Writer and Director Matthew Chapman and actor Peter Coyote take a stroll down memory lane with this interesting and informative commentary track. Chapman has clearly recently seen the film so he's a little more active, but it's quite clear that Coyote hasn't seen the film in a number of years. it's still a good listen and offers a lot of background information into the production of the flick.

Heart of Midnight Trailer: (HD 2:21) A solid trailer that sets up the film well enough without giving away the whole show.

Rush Trailer: (HD 2:20) A great piece of early 90s movie marketing, sells that film well. It's all the better that Optimus Prime is narrating it.

'Heart of Midnight' may not be the best or most memorable psychological thriller effort to come out of the late 1980s, but it still stands as a solid effort. With great performances from its lead actors, the movie makes for some fine viewing. Kino Lorber has done a decent enough job bringing the film to Blu-ray with a strong A/V presentation and an informative commentary track. It may not be the first film I would recommend to a friend looking for a good thriller, but I would absolutely say that this release of 'Heart of Midnight' is worth a look.

Sale Price 29.95
Buy Now
3rd Party 25.83
See what people are saying about this story or others
See Comments in Forum
Previous Next
Pre-Orders
Tomorrow's latest releases