3 horror stories based on the writings of Nathaniel Hawthorne. In the 1st story titled "Dr. Heidegger's Experiment", Heidegger attempts to restore the youth of three elderly friends. In "Rappaccini's Daughter", Vincent Price plays a demented father innoculating his daughter with poison so she may never leave her garden of poisonous plants. In the final story "The House of the Seven Gables", The Pyncheon family suffers from a hundred year old curse and while in the midst of arguing over inheritance, the Pyncheon brother kills his sister.

There's nothing quite like a movie that borrows a title from the public domain and runs hog wild with it. When you can attach a name like Poe, or Shakespeare to a film - no matter how low rent or low-budget, all of a sudden the audience has a bit more respect for the work. In the case of 'Twice-Told Tales' directed by Sidney Salkow and starring the legendary Vincent Price, three stories from the works of Nathaniel Hawthorne were used as inspiration for an anthology of horror stories.

This is the story of two old friends, Dr. Carl Heidegger (Sebastian Cabot) and his dear old friend Alex Medbourne (Vincent Price) meet for the former's Birthday. It's a dark and stormy night and their memories invariably take a turn towards darker remembrances. All these long years Carl has lived alone mourning the death of his fiancé Sylvia (Mari Blanchard). On this dreadful and dreary night, Carl insists on visiting her crypt. When the two friends discover that a trickle of water leaked into the coffin and has perfectly preserved her body for nearly 60 years, the two men believe they have found the fountain of youth! But as their dreams of restored youth and vigor overtake them, so do the memories and thoughts of jealousy and betrayal with murderous consequences.

Ever since the death of his wife, Dr. Rappaccini (Vincent Price) has held his daughter Beatrice (Joyce Taylor) close to home. In fact, the young girl has never ventured out beyond the courtyard walls in all of her eighteen years. As the dashing young Giovanni Guasconti (Brett Halsey) discovers the girl's beauty by meeting her through his balcony window, he also learns that the poor girl suffers from a horrible condition. Years before her father had changed her blood to the poisonous fluid that runs through the thorns of a thistle bush. Now whenever Beatrice touches someone or anything living, the plant, animal, insect, or even a human dies a horrible painful death.

The House of the Seven Gables

The Pyncheon family has endured a legacy of pain and death for over a hundred years. As the men of the family sought power, they were ultimately undone by their greed and the curse has been passed onto every man in the family, each meeting an untimely end. For Gerald Pyncheon (Vincent Price) he aims to put an end to the curse and claim what is his. With his new wife Alice (Beverly Garland), his sister Hanna (Jacqueline deWit) and their friend Jonathan Maulle, Gerald seeks to find the hidden fortune that is buried deep within the house. Even if Gerald finds the fortune, Gerald will still have to face the vengeful ghost of Mathew Maulle. 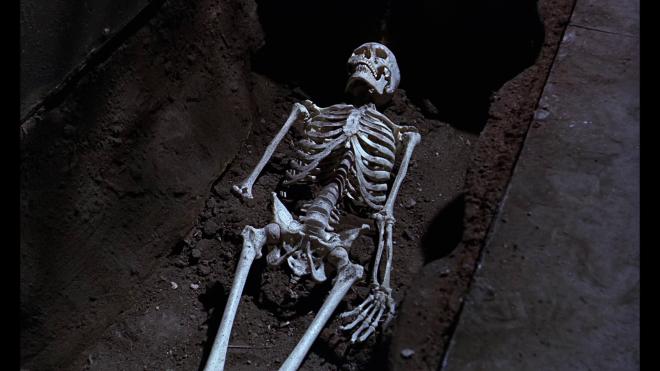 It's difficult to call the stories contained within 'Twice-Told Tales' as horror - or at least not in the modern sense of the word. In the days of Nathanial Hawthorn, a cautionary story of morals and ethics instead of demons, zombies or creatures of the night is what stood for horror. These stories aren't exactly "scary" so much as they are creepy examples of the worst parts of human nature. When faced with permanent youth, the prospect of allowing your child to live a life beyond your control or even a found fortune, the worst is invariably brought out in the people of this film. Or, to be more specific, the characters that Vincent Price plays. Throughout, he takes the role of the villain in each of these stories. Only the third story, The House of the Seven Gables approaches anything resembling a traditional horror film, and even then it borrows some beats from Price's earlier film 1959's 'The House on Haunted Hill.'

Taken as a whole all three stories are an enjoyable watch. It had been better than twenty years since I saw this movie and it was a delight to rediscover this one. The tragic end to Dr. Heidegger's Experiment, in particular, has always stuck with me. I don't want to give away anything and ruin it for anyone who hasn't seen it yet, but I'll say that it is a real gut punch of an ending. For those horror fans who have a love for Vincent Price, the great actor is in fine form here proving once again how an entire genre could become synonymous with his name.

'Twice-Told Tales' arrives on Blu-ray thanks to Kino Lorber and their Studio Classics line and is pressed onto a BD-25 Region A locked disc. Housed in a standard case, the disc opens directly to the film's main menu.

With a strong 1.66:1 1080p transfer, 'Twice-Told Tales' make a beautiful arrival to Blu-ray. With fine film grain retained, detail levels are exquisite. From the set design and scenery to the intricate costuming to the incredibly impressive makeup effects, all of the wonderful details are on display with this transfer. Colors are bright, beautiful and robust allowing greens and reds to have plenty of pop and presence. Sometimes reds can be pushed a bit far resulting in some bright pink flesh tones in some shots. Part of that has to do with the colorful set lighting as well, but there are some scenes that do stand out as potentially not having the correct coloring. Black levels are deep and inky and with plenty of shadow separation creating an image that maintains a strong sense of depth. The print used for this transfer is also in immaculate shape as there was hardly any noticeable wear beyond some slight speckling visible. For a deep catalog title on a second tier release, 'Twice-Told Tales' makes for a better than average Blu-ray debut and one that should please fans of this film.

With a DTS-HD MA 2.0 audio mix, 'Twice-Told Tales' suffers from some issues that can muddy the audio quality quite a bit. For the most part, when the film is quieter and conversational, the track handles the higher and lower registers just fine. It's during the big climax moments during the ends of each segment that things don't fair quite so well. Where one moment dialogue can be cleanly heard, the score can swell and blow everything out creating a distorting effect that can be a bit irritating. There is also an amount of hiss that is present throughout the film's run, but also seems to pick up during the heavier orchestra swells in the score. If you had to compare apples to oranges, this isn't the worst audio track I've heard and had to endure for a catalogue title, I would give that honor to 'The Mountain,' but it is unfortunate given how wonderful the film looks. The audio could use some assistance, but is still a strong presence and a reliable asset to this release.

Audio Commentary: Film historians Richard Harland Smith and Perry Martin provide an interesting and informative commentary for this film. The two are clearly fans of the work so it's nice to hear some of their thought about the film as well as their excitement and appreciation for it.

Trailers From Hell: (HD 3:04) Horror director Mick Garris does a brief interview about the film providing his thoughts and feelings about it. Not much here really and it's entirely too brief to have any weight.

If you find yourself in need of a good classic piece of horror cinema featuring the late great Vincent Price, you have a number of amazing titles to choose from. The man did so many film's it's hard to know which ones to recommend. While it may not be the most amazing work in Price's career, 'Twice-Told Tales' is definitely a film you should keep on your radar. Kino Lorber has brought the film to Blu-ray with a fine video transfer and a serviceable audio presentation. With a few decent extra features, I'm left to call 'Twice-Told Tales' as recommended.

Sale Price 89.74
Buy Now
3rd Party 11.03
In Stock.
See what people are saying about this story or others
See Comments in Forum
Previous Next
Pre-Orders
Tomorrow's latest releases