A group of Mexican revolutionaries murders a town priest and a number of his christian followers. Ten years later, a widow arrives in town intent to take revenge from her husband's killers.

You can defend a movie only just so far before you have to concede the fact that what you're seeing - no matter how cool looking it is - is just a bad, ill-conceived movie. You can have amazing performances from stars like Robert Shaw, Telly Savalas, Martin Landau and even Fernando Rey - and it would still be a bad movie. Sadly the convoluted plotting, odd performances, and the terrible editing of 'A Town Called Hell' makes the film a disappointment.

In the town of Bastard, there is a quiet lonely Priest (Robert Shaw) who mostly keeps to himself when he isn't holding services or presiding over the burial of local bandit Don Carlos's (Telly Savalas) latest victim. With a dark history of raiding and killing innocent people in the name of the Mexican revolution, the Irish Priest capitulates to Don Carlos' every demand. Don Carlos runs the town with his murderous gang at his left side and with a loaded six-shooter in his right hand - and he's quick to use both with little mercy or conscience to hold him back.

The simple lives of the people of Bastard are turned upside down with the arrival of The Black Widow Alvira (Stella Stevens) and her hired deaf/mute gunman Spectre (Dudley Sutton). She comes to town dressed all in black, riding in a black velvet coffin situated inside an ornate black hearse. She has come to Bastard to view the grave of her husband who was murdered ten years earlier at the hands of the tyrannical revolutionary leader, Aquila. Offering a $20,000 bounty, Alvira want's Aguila's head, and Don Carlos is all too ready to oblige the young woman - even if that means offering up a couple of his own men as scapegoats.

Things are further complicated with the arrival of a vindictive military leader known only as The Colonel (Martin Landau). He and The Priest share their own dark personal history. Reluctant to recall the good ol' days, The Colonel simply wants what everyone in town wants - Aguila. The Colonel wants this man so badly that he's ready and willing to kill every man, woman, and child in town one at a time until the mysterious Aguila steps forward. The only man in town able to identify Aguila is an old blind man (Fernando Rey) who can only do so by touching his face. 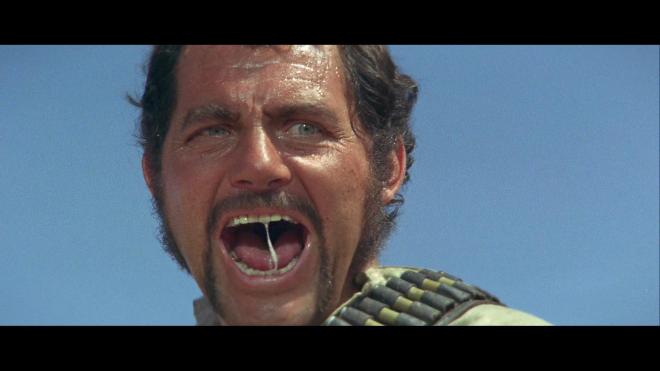 'A Town Called Hell' should have, and easily could have been a great exploitation-style Western. It was trying to crib a lot of Spaghetti Western tropes while also blazing its own trail. Sadly in my point of view, the experiment failed. Story structure within the script as well as how a film is edited is crucial. 'A Town Called Hell' is one of those films that seems hell-bent on breaking all the narrative conventions associated with filmmaking simply because it can, not because the story demands it or for a sense of artistic license. Character motivations are all over the map as well as their interactions. Priest and The Colonel seemingly recognize each other in one scene, but forget each other in the next. How the Colonel doesn't know who Aguila is is confounding when one of the characters he already is familiar with is standing right in front of him. The idea of a blind Fernando Rey literally feeling out the man's identity was really cool - but unnecessary because the person is standing right there. And by the time the big reveal hits, it feels more like a cheat instead of a shocking revelation.

I don't usually mind creative editing so long as there's a reason for jumps in time and place. For the most part, the film follows a traditional A to Z structure that simply skips a few letters every now and again. But then the film goes into a prolonged and confusing flashback. I'd love to explain this in detail, but it'd spoil the central mystery involving the identity of Aguila. For one thing, it's a bit jarring when you hear a cover of "The Battle of New Orleans" playing to a dance hall bar brawl, but then there isn't any clear sense of time and place. Is this flashback ten years ago? Twenty? Or is this a flashforward that takes place in the future and the movie just skipped a reel? It takes a long time to get answers to those questions and by the time they arrive, you may be too mentally exhausted from trying to make any sense out of this movie to care.

'A Town Called Hell' arrives on Blu-ray thanks to Kino Lorber and their Studio Classics line pressed on a BD25 Disc. Housed in a standard case, the disc opens directly to the main movie.

For a film of this vintage, the image quality of this 2.35:1 transfer is actually very impressive. Like 'Navajo Joe,' there is a bit of edge enhancement employed, but not too badly. The image retains the grain structure effectively and offers up some fine detail levels - especially in close-ups and medium shots. Colors are equally well replicated as primaries have just enough pop to them while flesh tones appear accurate. Black levels are also impressive giving rise to a nice sense of three-dimensional depth. There is some expected print wear and tear, but nothing worse than mild speckling. Over all, this is a very pleasing transfer and adds to the style of the film nicely and makes for a nice Blu-ray debut.

This kind of hurts to say, but the English DTS-HD MA 2.0 track for 'A Town Called Hell' has some pretty troublesome issues knocking the score down. On the positive side of things, most of the track is an auditory beauty, as dialogue can be heard clearly, sound effects are prominent, and the film's score is rousing and entertaining. Most of the time this is an outstanding track - except for when it isn't. Now the hard part to discern about the following criticism is whether or not the issue is a problem with this audio track or if it's indicative of the audio elements and a particular actor's performance this track was assembled from. The quiet conversational moments - in particular most of the scenes featuring Martin Landau - are excruciatingly quiet. Things are so quiet that I had to turn the volume of my sound system all the way up to maximum levels and I still could hardly understand anything that was being said. Maybe Landau just decided to mumble all of his lines? But since these scenes seemingly offer some critical story information it becomes frustrating to have to guess at what is being said - especially when these scenes last for several minutes at a stretch. Again, I can't tell if this is a track issue or a problem with the film's original audio recordings. I have no prior experience with this film before this Blu-ray release, so maybe a fan can offer some added insights? As it stands it's a big issue and one I'm grading harshly for.

Navajo Joe Trailer: (HD 1:51) Beyond this film also starring Fernando Rey and Aldo Sambrell, I don't quite understand why this trailer is here and there isn't one for 'A Town Called Hell' itself. Still a cool trailer just the same.

Talk about a weird movie. 'A Town Called Hell' could probably be described as a cinematic disaster, but thankfully the lead performances and the cool premise makes the experience somewhat watchable. The image quality is pretty solid for a catalogue release, but the audio is a bit of a worry. With only a trailer for 'Navajo Joe' as the single extra feature, I'm left to call this one as a rental. There are going to be some viewers out there who will be fascinated by the flick, but it's certainly not for everyone.

Sale Price 17.99
List Price 22.95
Buy Now
3rd Party 19.99
In Stock.
See what people are saying about this story or others
See Comments in Forum
Previous Next
Pre-Orders
Tomorrow's latest releases