Tut is a larger-than-life, action-packed TV event that tells the astounding saga of one of history's most extraordinary rulers, Tutankhamun, his rise to power, and his struggle to lead Egypt to glory. The historical drama also stars Sibylla Deen, Alexander Siddig, Kylie Bunbury, Peter Gadiot, Iddo Goldberg and Nonso Anozie.

Historic people and events can be exciting subjects to adapt and shape into a story that is worth telling cinematically. They may the perfect bait to secure an audience at a movie theater or to ensure that people sit down in front of their television sets for multiple nights of viewing. Most often everything works out well enough and resulting program can be worth the time, even if some dramatic license has been taken. In the case of 2015's presentation of Spike's 'Tut,' dramatic license has been taken to the point that little actual history remains.

For the young Tutankhamun (Kaizer Akhtar), he was supposed to have years to grow and learn to prepare to become Pharaoh of Egypt. But in 1332BC when the heir to the throne is but nine years old, his father Pharaoh Akhenaten (Silas Carson) is poisoned. When his father succumbs to the ravages of the poison, Tutankhamun is thrust into a precarious position of leading an entire country. As but a child, he is unaware that there are people who served his father and who in turn should serve him, actually plot his demise including the High Priest Amun (Alexander Siddig), his closest advisor the Grand Vizier Ay (Ben Kingsley) as well as the General of his armies Horemheb (Nonso Anozle).

Ten years later the small boy has grown into a curious but sheltered young man (Avan Jogia). By the wishes of his late father, Tutankhamun has married to his sister Ankhesenamun (Sibylla Deen). Without an heir, Tutankhamun and his sister/wife are feeling pressures and threats from every corner. While they are certain there are people who conspire against them and their bloodline, Tutankhamun and Ankhesenamun are also faced with the burden of leading a people they do not know or see beyond their palace walls. Ever curious, Tutankhamun ventures out beyond the walls at night to see Egypt for what it really is and begins to learn the stark truth that has been hidden from him.

As his drive to rule honestly and become a true Pharaoh pushes his advisors and those who conspire against him into tight corners, Tutankhamun is able to prove himself a worthy successor by fighting bravely on the fields of battle, staving off a plague, and as a politician when a massive invading Mitanni force is mere miles away from the gates of Thebes. In the process, he learns the malicious designs of those closest to him while also falling in love with the beautiful peasant woman Suhad (Kylie Bunbury). If Tutankhamun dreams to hold the throne and secure his bloodline, he will have to tame his ambitions as well as his heart in order achieve his destiny as Egypt's greatest King. 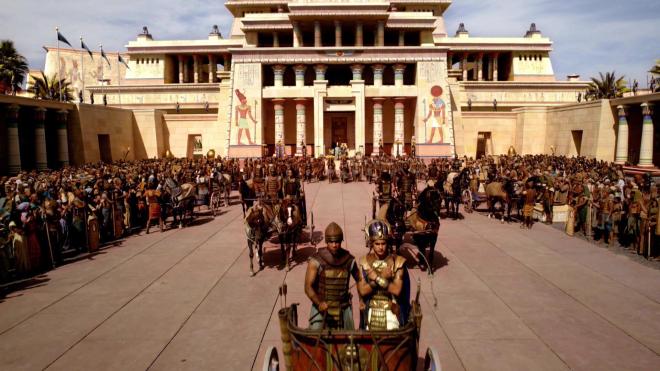 Tut tut, King 'Tut.' This is a three-part series that tries to sit with the adults alongside offerings from the likes of PBS, The History Channel, and HBO but fails to see that it still belongs at the kid's table. It tries to look like a big expensive show with brilliant costuming, but the weight of the forced dramatics makes this show look and sound cheap like a soap opera melodrama. The carboard-looking sets don't help matters much on that end. The most egregious issue with this show is that so much of its purported "history" is made up. While key events are accurate, the finer details reveal it to be a forgery of a better production. King Tut has been an enigmatic historical figure ever since his tomb was discovered in 1922. As much as we know about the boy king, the facts we do have come from conflicting sources and stories. Of those few facts that we do have, few of them actually make it into this mini-series. While there should always be a thin tether between history and entertainment, the strand snaps under the weight of this show's hammy dramatics.

Not helping matters any is the cast. Avan Jogia does what he can to play a convincing King Tutankhamun but his glowering, stern-faced portrayal starts to sound silly after awhile and begins to wear thin after awhile. He just doesn't have the dynamic presence needed to pull off a role of this weight. At his side is the beautiful Sibylia Deen as Ankhesenamun. She handles the role fairly well, but she's given very little to do beyond standing and pouting. Her's is a character we should feel sympathetic towards, but she ends up coming off as more than a little bratty. Then there is poor Ben Kingsley. I imagine that the man thought he was signing up for something grand - either that or 'Tut' was just another "paycheck role." Either way, the man looks bored here and can barely muster much of a performance beyond raising a hand flippantly and sounding disinterested.

'Tut' is a pretty looking mini-series that sadly overstays its welcome very quickly. When you start adding up all of the conspiracies, the politics, the intrigue, the romance, and the big battle sequences, the whole thing becomes very tedious very quickly. This is a shame because I was actually really looking forward to this mini-series. When I was about twelve years old I got to go to England with my family and I got to see the Rosetta Stone at the British Museum. It was an impressive sight to see and that piece of the Egyptian culture has stuck with me for the last twenty years. While I'm far from an expert on Egyptian history, I don't need to be one to see that this show is all surface with little genuine substance. Even on a scale of entertainment, this series is a 90-minute movie stretched over four very long hours.

'Tut' arrives on Blu-ray from Spike and Paramount pressed onto 2 BD50 discs. Housed in an eco-friendly 2 disc case, the discs open directly to the main menu. Included with this set is an Ultraviolet Digital Copy voucher. All extra features are found on disc two.

'Tut' earns some solid marks for its 1.78:1 1080p presentation. Shot in Morocco, the scenery's craggily landscape looks incredible in high definition. The sets, costuming, and makeup effects appear with terrific clarity as detail levels look splendid throughout the show's 270-minute runtime. Colors are bright and vibrant with a pleasing orangish tinge to them. Don't worry, this transfer isn't pushed into teals but allows primaries to truly shine through and flesh tones seem healthy and accurate. Black levels, for the most part, are rich and inky providing a great sense of depth, however, some night shots can suffer from some slight crush effects. A little bit of video noise pops up here and there, mostly during the major Mitanni battle sequence, but doesn't really bring down the look of the show.

With a strong Dolby TrueHD 5.1 audio track, 'Tut' is a richly beautiful sounding series. Dialogue carries most of the film and is clearly heard throughout, but it's the sound effects and music by composer Jeff Russo that really makes this audio track shine. There is plenty of atmospheric space in this track that gives an authentic surrounding fidelity. Imaging is impressive and even during the film's quieter moments the surround channels remain engaged. Levels are well balanced as the various elements keep to the midranges without any spikes or drops ensuring that you shouldn't have to adjust your volume during the entire run of the show.

History Revealed: (HD 6:49) Basically this featurette serves as a free pass for the producers to explain away why the makers of this series made everything up. It's a decent feature in the sense that we actually get a look at his actual tomb. This would have been better had they not tied in material from the show or interviews with the producers.

The Costumes of Tut: (HD 3:31) The costuming is pretty much the best aspect of the show so it's actually pretty cool to see how this stuff was made and the immense amount of work that went into it.

Unmasking The Legend: The Making of Tut: (HD 34:01) It's a pretty standard EPK style bonus feature but does offer some information when it comes to shaping the characters, locations, costuming, and the big battle sequences. Annoyingly, a lot of the material from the costuming feature is repeated here as well as some material from the History Revealed feature. It's an okay extra, but doesn't really go into extensive detail but rather a cursory glance.

'Tut' is one of those mini-series events that I don't think could ever live up to expectations given the subject matter. For such a mysterious figure as King Tut is, there is very little actual history on display and because of that, the dramatics feel hammy and forced. This show just didn't do it for me. If you were a fan of the program you should be happy to know that this Blu-ray release is pretty great. The video presentation is richly detailed and the audio track is impressive and effective. Extra features are a bit scanty and don't provide much insight into the production. While I wasn't a fan, I know some people really got into this one so to that end, this Blu-ray is a rental. A blind buy is a big risk in my book.

Sale Price 7.11
List Price 14.99
Buy Now
3rd Party 15.78
In Stock.
See what people are saying about this story or others
See Comments in Forum
Previous Next
Pre-Orders
Tomorrow's latest releases