A precision-trained military dog, Max serves on the frontlines in Afghanistan alongside his handler, U.S. Marine Kyle Wincott. But when things go terribly wrong on maneuvers, Kyle is mortally wounded and Max, traumatized by the loss of his best friend, is unable to remain in service. Sent stateside, the only human he seems willing to connect with is Kyle's teenage brother, Justin, so Max is saved when he is adopted by Kyle's family. But Justin has issues of his own, including living up to his father's expectations, and he isn't interested in taking responsibility for his brother's troubled dog. However, Max may be Justin's only chance to discover what really happened to his brother that day on the front, and with the help of Carmen, a tough-talking young teen who has a way with dogs, Justin begins to appreciate his canine companion. Justin's growing trust in Max helps the four-legged veteran revert back to his heroic self, and as the pair race to unravel the mystery, they find more excitement—and danger—than they bargained for. But they each might also find an unlikely new best friend… in each other.

From 'Old Yeller' to 'Lassie' to 'Homeward Bound,' Hollywood and movie audiences love a good dog movie. Sometimes we love dog movies so much that we get what happened in 1989 and are rewarded by dual entries in the cinematic sub-genre with 'K-9' and 'Turner & Hooch.' Some of these movies are wonderful entertainment, others not so much. Then there are movies that use the titular dog of the film as a piece of warm-hearted American patriotism like the film 'Max' has. However in this instance, the patriotism is so cliched as to be insultingly disingenuous to the very real-world stories of what happens to military dogs after their terms of service are up.

For Belgian Shepherd Max, life isn't made up of backyards playing fetch and jumping into the family pool. His daily routine is going on a patrol with his handler Kyle Wincott (Robbie Amell) and their unit in Afghanistan. Max is trained to sniff out bombs and caches of weapons effectively putting his life at risk so the soldiers on the ground don't have to. Max is well trained and does whatever Kyle orders him to do and when necessary even puts his life on the line to save his handler. Unfortunately, the dog can only do so much.

After Kyle is killed in action, Max is introduced to the grieving Wincott family at the funeral made up of Gulf War Veteran father Ray (Thomas Haden Church), Kyle's mother Pamela (Lauren Graham), and Kyle's younger rebellious brother Justin (Josh Wiggins). Before that meeting, Max couldn't get along with anyone. He was an angry dog saddened by the loss of his handler, but upon meeting Justin, he becomes noticeably calmer. The dog and the strong-willed young man have a bond. So, when the Wincotts learn that the dog is going to be euthanized since he can't go back into combat, the family hop in their van and takes the dog home.

At first Ray isn't too pleased by the idea and neither is Justin. When Justin starts to turn a corner with the dog after getting some help from his buddy Chuy (Dejon LaQuake) and Chuy's dog-savvy cousin Carmen (Mia Xitlali), Justin has a new friend and starts to own up to some responsibility. Unfortunately, a dark cloud looms on the horizon in the form of Tyler Harne (Luke Kleintank) who served with Kyle in Afghanistan. Max can smell a bad egg from a mile away and Tyler is getting too close for comfort. When no one else will believe Max, it's up to Justin to prove that Tyler is up to no good. 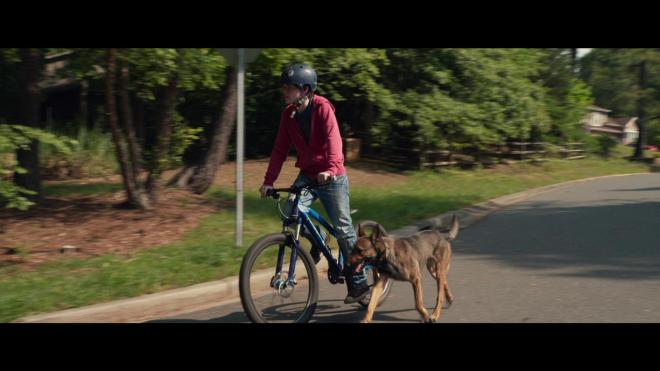 Movies that are designed to pull at the heartstrings of the audience are pretty common place. These are movies that know how to set up scenes and fill them with meaningful characters and events in order to get that little tear to form in the corner of your eye. 'Max' is a movie that is entirely too preoccupied with telling the audience what to feel that it fails to generate any kind of genuine response. By using every hero dog movie cliche in the screenwriting book, 'Max' treats its military service dog framework with a rather unfortunate amount of disrespect. It shows us images of a dog grieving at the coffin of its handler. It shows us the unfortunate conditions that troubled service dogs come home to. The film is so desperate to make us feel something that it almost becomes insulting.

Service dogs and the condition that they come home in is a very real issue facing the country. Effectively these animals are soldiers without homes. So many of them develop a form of K-9 PTSD that they can't handle loud noises, stressful situations, and have an incredibly difficult time adjusting to anyone that wasn't their initial handler. Because these animals can't cope without strenuous and dedicated retraining, they're often euthanized. 'Max' could have been a wonderful movie about redemption and the process of grieving and healing from the wounds of tragedy. Instead, 'Max' tries to be a cliched action movie. If you saw 'Turner & Hooch' and 'K-9,' smash those two films together and add the military service animal aspect and you have a clear idea of what this movie is. Everything is predictable to the point that it becomes angering.

Josh Wiggins as Justin is fine casting, and his work with the dog playing Max shows up on screen very nicely. 'Max' does a solid job of building that relationship, but the action movie cliches undermine the struggle the film went through to build that chemistry. Thomas Haden Church is a fine actor who deserves better than this one note character of the distant rough around the edges veteran father who learns to respect and love the only son he has left. As someone who has watched the entire run of 'Gilmore Girls' and is actually intrigued by the show's future resurgence, I was excited to see what Lauren Graham can do with this role. Sadly because of some notable script limitations and a bad faux southern accent, the actress can't rise very high above the slim material.

All of the potential success and ultimate failures of 'Max' rest entirely on director and writer Boaz Yakin and co-writer Sheldon Lettich. Boaz Yakin is the man behind such greats as 'Fresh' and 'Remember the Titans.' Sure his work fell off after that flick but he's a competent director and knows how to make an audience feel a genuine emotion. Here, his best efforts are wasted. Co-writer Sheldon Lettich should go back to writing and directing movies for Jean-Claude Van Damme, he had a knack for that kind of material. Somehow, 'Max' was material that went over these two filmmaker's collective heads. 'Max' was a movie that I was looking forward to given its unique story hook involving service animals, but ultimately this movie was a disappointment for me. For more forgiving audiences, this film should entertain and it is relatively kids friendly enough that you shouldn't have to worry about the little viewers in your home, just walk into this one with some expectations in check. If you're looking for an earnest war-time drama, 'Max' isn't that movie.

'Max' makes its Blu-ray debut thanks to Warner Brothers pressed onto a BD50 disc. Housed in a standard 2-disc eco-friendly case with identical slipcover, the Blu-ray comes with DVD and Ultraviolet HD Digital Copy voucher. After a couple of trailers, the disc arrives at the main menu.

Where 'Max' scores some solid points is with it's digitally photographed 2.40:1 1080p presentation. This is a beautifully detailed looking film that shows all of the rich amber colors to create a pleasing warm looking film. Detail levels are absolutely immaculate from the fine facial features to costumes to the lush scenery of the film's North Carolina shooting locations to the rough and craggily deserts filling in for Afghanistan, this transfer brings everything to life. Colors skew to warmer golden tones so flesh tones appear a bit more to the orange side of the color wheel, but it also brings out the comfortable browns and greens have a deep richness to them. Black levels are all around pretty solid bringing the film a welcome sense of three-dimensional depth to it. When the film shifts to a few night scenes the picture loses some of the detail and can become a bit flat, but thankfully it doesn't get crushed out completely. Free of any compression artifacts of any notable kind, this is about as good as it gets.

'Max' arrives on Blu-ray with a strong DTS-HD MA 5.1 audio mix. The film itself is largely conversational with only a few bursts of action peppered throughout the film's runtime. To that effect, the dialogue comes through crystal clear and largely keeps to the front/center channels leaving the sides and surrounds to handle the film's score by composer Trevor Rabin and the various background sound elements. All elements have plenty of space to breathe and sound accurate creating a nice sense of direction and presence to the track at all times. Even the quieter moments offer enough ambients to keep the surrounds engaged. Where this track loses a point from me is in the film's big finale. An elaborate chase sequence with bullets and explosions and yet, it just doesn't draw the expected impact to accompany the visuals. The bullet and explosion effects actually sound a bit hollow and can pull you out of the moment. But that is the only issue I have with this otherwise near-perfect audio mix.

Working With Max: (HD 4:49) Animal trainer Mark Forbes along with the film's cast and crew talk about working with the various dogs that were used to portray Max and how they worked to create an authentic look for a service dog.

Hero Dogs: A Journey: (HD 7:43) A very quick look at the history of the Military's use of dogs in combat and the type of dog Max is, a Belgian Malinois, an offshoot of the Belgian Shepard breed that is commonly used for military service.

'Max' was one of those movies I really wanted to like and was genuinely looking forward to seeing when it reached theaters. A busy schedule prevented me from catching a proper theatrical viewing, and that's perhaps for the best. At the end of the day, the film was a disappointment for me. This is a story that had so much potential but for some reason decided to take the easy way out and fill itself with so many cliches that it becomes difficult to take seriously. Warner Brothers has done a decent job pulling this Bu-ray together with a strong A/V presentation. Extra features are very lacking considering the subject matter. I'm calling this one a rent first. Some may be won over by it, I just wasn't one of those people.

Sale Price 9.58
List Price 19.98
Buy Now
3rd Party 2.22
In Stock.
See what people are saying about this story or others
See Comments in Forum
Previous Next
Pre-Orders
Tomorrow's latest releases