The show that revolutionized primetime proves once again why it is television’s most addictive and creative series, as the epic story of LOST twists, turns and spirals through time in its brilliant fifth season. Destiny sends the Oceanic 6 back to the Island and into the heart of the enigmatic Dharma Initiative. The reason they had to return and the fate of all those who were left behind is revealed as the momentum builds toward the much anticipated series finale in 2010.

We're approaching the homestretch now, and things are getting very interesting indeed. After four seasons of slowly, methodically laying out the pieces of television's most elaborate and most confounding mystery, all hell breaks loose on 'Lost' in Season 5. With just one more year left to go, this penultimate season is a time of major revelations. Right from the premiere episode, we're finally let in on one of the island's most important secrets. The show is known for dropping bombshells at the beginning and end of every year. This one is quite a doozy. Season 5, it turns out, is all about time travel.

As we ended Season 4, the island had vanished right in front of our eyes, leaving nothing but a ripple in the middle of the ocean. Our cast of Losties has been split into two major camps: the so-called "Oceanic Six" that made it back to civilization, and those that disappeared with the island. We've already seen some of what happened to those on the mainland in the flash-forwards last year. Life back home hasn't been all sunshine and roses. Jack has a pill addiction. Hurley's back in a mental institution. Sayid is a hit-man. Kate still has legal troubles, and must fight to keep custody of Aaron. Sun is mourning the loss of her husband, and holds quite a grudge about that. Now, these characters must face up to the realization that they need to return to the island. To do that, they'll need the help of Ben Linus, of all people. But first, they need to figure out just where the island went. Or, more appropriately, when it went.

Meanwhile (which is admittedly an odd word to use in this case), Sawyer, Juliet and the rest that were left behind find themselves tripping through time from the past to the future and back. Forget the old flashback episode structure from prior years. Forget the flash-forwards. Now we're jumping uncontrollably forwards, backwards and sideways, visiting events throughout the island's history. Eventually, the characters will settle in at a time and place they couldn't have expected, but we the audience have been desperate to know more about. Yes, it's the DHARMA Initiative in full bloom. Every season of 'Lost' introduces and focuses on a new group of characters. This year, we learn all about DHARMA from within its very ranks.

The genius of 'Lost' is that the show can introduce outlandish concepts like time travel without alienating its audience because it has spent so much time developing its characters. By the fifth season, we're completely invested in the lives of these people and eager to know what happens to them next. All the while, the show's producers have been planting little seeds that inevitably must bloom into such tremendous revelations. Time travel hardly seems like much of a stretch compared to some of the other possible theories that fans have been debating. And yet, as intense and wide-ranging as viewer speculation has gotten, the writers always find a way to pull the rug out from under all of our expectations. I defy anyone watching Season 5 for the first time to predict how the finale will play out.

If 'Lost' isn't the greatest show on television, I don't know what is.

ABC Studios and Buena Vista Home Entertainment have brought 'Lost: The Complete Fifth Season' to Blu-ray in a box set subtitled "The Journey Back – Expanded Edition." The "journey back" part pertains to the season's storyline, but there's no explanation anywhere for the "expanded experience" part. The 'Complete Fourth Season' box set was likewise titled. In that case, one of the episodes in the season was "expanded" by 30 seconds of footage that didn't air during the original broadcast. However, as far as I'm aware, all of the episodes in this fifth season are presented exactly as they aired on American television (minus commercials, of course).

In its overseas broadcasts and DVD editions, the double-length finale 'The Incident' was broken into two separate episodes and had some of its scenes edited or shuffled around. The American video release contains the original American edit that runs 87 minutes straight through. Perhaps that's what the "expanded edition" title is referring to?

Two different Blu-ray packages are available. The standard Blu-ray set (reviewed here) is packaged in a multi-panel keepcase with slipcover, much like Seasons 1, 2, and 4. Season 3, which came in a larger cardboard box, remains the odd man out.

Die-hard fans and those who appreciate overly-elaborate packaging may prefer the more expensive "DHARMA Initiative Orientation Kit." In addition to the five Blu-ray discs, the Orientation Kit includes a Geronimo Jackson CD single, a VHS tape with a special video welcome message from Horace Goodspeed, and several DHARMA patches, pamphlets, maps, and other swag. The whole thing comes in an oversized box that will in no way fit with your other seasons on a standard video shelf.

Regardless of which package you buy, the studio has not bothered to provide a printed episode guide this time. Also, the first Blu-ray disc in the set opens with three annoying trailers before the main menu.

Every season of 'Lost' has looked excellent in 720p broadcast, and even better on Blu-ray. Some seasons are slightly better than others, however. The Season 4 box set, for example, had a light application of artificial sharpening that left the picture with some minor edge ringing artifacts. It still looked great, of course, just a bit imperfect.

Fortunately, Season 5 is pretty much back to perfection, or as close to it as I've seen on the Blu-ray format. The 1080p/AVC MPEG-4 transfers are tack sharp and loaded with extraordinary detail. If anything, the fakeness of Jack's beard is a little too clear in this enhanced resolution. Colors are vibrant and natural. Contrasts are rich and have plenty of discernable shadow detail. There's no evidence of any artificial sharpening or Noise Reduction filtering. Grain is sometimes apparent, especially in night scenes, but looks organic and film-like. This is everything you could want from high definition video.

The audio quality is up to par as well. 'Lost' has excellent sound design even by feature film standards, much less those of a TV show. Dynamic range is broad and engaging. Surround presence, although generally subdued, creates a very good sense of envelopment and makes effective use of directional activity when needed. Some of the sound effects that the audio team for the show comes up with are truly startling.

The Season 5 soundtracks are encoded in lossless DTS-HD Master Audio 5.1 format, much like the Blu-ray editions of Seasons 1 and 2. (Seasons 3 and 4 were issued earlier and used PCM 5.1 instead.) Once again, fidelity is outstanding across the board.

All of the bonus features from the DVD edition also appear the Blu-ray, but most are encoded in High Definition video.

The Best Buy retail chain in North America and the HMV chain in the UK also offer an exclusive bonus disc with extra supplements for shoppers who buy at their stores. The disc contains more deleted scenes, easter eggs, and extensions to the "Lost on Location" documentary.

This season has a few high-def exclusives. 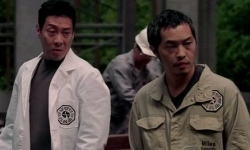 As always, this new season of 'Lost' is loaded with plenty of easter eggs. All are on Disc 5.

I can hardly believe that, as I write this, 'Lost' is on the verge of airing its final run of episodes. Perhaps even more amazing is the fact that the show has maintained such a high standard of quality for so long. Season 5 is, from start to finish, intellectually fascinating and breathlessly exciting.

The Blu-ray set is another winner as well. Its video and audio are the stuff that home theater was made for. The supplements are also pretty interesting, especially the Lost University BD-Live option. This new season comes highly recommended once again, of course.

Sale Price 44.51
List Price 49.99
Buy Now
3rd Party 49.99
In Stock.
See what people are saying about this story or others
See Comments in Forum
Previous Next
Pre-Orders
Tomorrow's latest releases