LA cops Gould and Blake get in over their heads when they don't heed orders from above and go after a big crime boss. While higher ups in the police department want the cop duo to just focus on nabbing petty criminals, the team does so while still going after LA kingpin Rizzo. Various fist fights, chases, shootouts and other carnage occur as the two cops go after Rizzo's crime syndicate.

"I think you men are despicable!"

I've mentioned the importance of tone in other Blu-ray reviews that I have written for High-Def Digest. This idea that a film can be one thing while presenting itself as something else is a perfectly sound notion. Horror films that are Comedies, Thrillers that are Sci-fi flicks, this sort of genre cross-pollination happens all the time and for the most part it works. If a film were a straight thriller or just a straight comedy, that's all fine and good, but adding some extra dimension to it can work to add a little extra flavor. 1974's 'Busting' starring Elliott Gould and Robert Blake is a decent Comedy/Thriller that never quite figures out how to balance its tone.

For LA Vice Squad detectives Keneely (Elliott Gould) and his partner Farrel (Robert Blake) their 9-5 operations busting the city's underbelly of salacious activities involving massage parlors, nightclubs, and even going after high-end call girls is a thankless gig. After one seemingly innocuous call girl ends up with a high-priced lawyer by the name of Weldman (William Sylvester), Keneely and Farrel start putting the pieces together that there is a bigger player at the center of everything that is going on.

While Keneely and Farrel work themselves to the bone to take down low-level operators, the big man at the top of the scum pile Carl Rizzo (Allen Garfield) gets to do whatever he wants without any fear of reprisal. Keneely and Farrel do their due diligence and put the best effort they can to make sure every case they pull together sticks, but somehow everything always unravels right at the bitter end. And with just a cursory glance, it appears that Rizzo and his slick lawyer Weldman are right behind everything.

With department corruption on top of political bureaucracy bogging down every case they bring to court, Keneely and Farrel decide it's time to take the fight right to Rizzo. Operating outside of the law, they're now able to go hard at the man at the top and bring him down one way or the other. With Rizzo's Bouncer (Sid Haig) and other goons out to kill the two intrepid cops, they're going to have to use their years of experience on the force as well as their wits to ensure they catch Rizzo in the act before his next big drug shipment makes it to the streets. 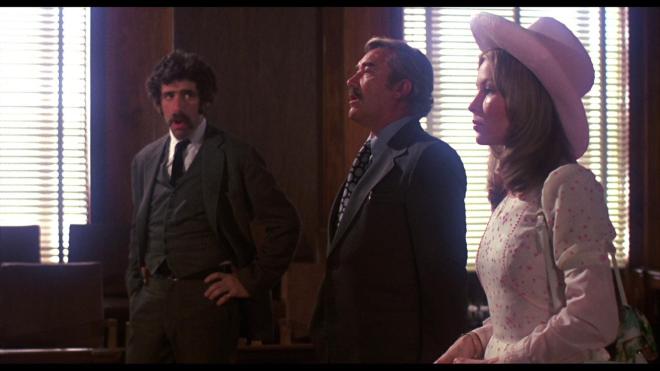 As the debut film of writer and director Peter Hyams, 'Busting' turns out to be a decent little bit of entertainment. As a Crime/Thriller with a message - the film is almost too funny for its own good. This brings me to the point I mentioned at the outset about tone. On one hand, this movie is a taut, well scripted and executed little thriller. On the other hand, it's also a bit too funny for its own good as segues into lighter hijinks tend to throw off the flow of the film. One minute we're watching Elliott Gould shoot for an Oscar nomination and the next it's like we're watching his Trapper John routine from 'M.A.S.H.' all over again. While I appreciate that the film tries to have a sense of humor, considering the cases these two have to work, 'Busting' seems to have a hard time reining in the gags.

As for performances, Elliott Gould is at his 1970s best here, providing a nuanced depiction of a beaten down cop who signed up to do some good for society, but society seems to be rejecting his efforts. At his right side is the ever reliable Robert Blake in his pre-'Baretta' days. Blake isn't given a whole lot to do other than to act beside Gould who manages most of the heavy dramatic as well as comedic lifting the film requires. At the center of the film is Allen Garfield as Carl Rizzo who does a fantastic job playing a sleazeball crime kingpin who knows the score and how the game is played. As great as Garfield is for this part, it unfortunately, feels like he's a better villain for a different movie. Again, this goes back to tone. While Keneely and Farrell are pulling pranks, harassing, and even burning Rizzo's car, Garfield plays the part straight as an arrow and with enough menace to constantly feel threatening.

Adding to the thrills but not helping to balance the film's tone are a pair of extremely tense and incredibly well-executed shootout sequences in a grocery store and at a hospital. The editing is fantastic as the men circle each other, stealthily attempting to gain the upper hand in the fight while there are innocent civilians caught in the middle. These moments feel like big scenes without becoming too over the top and there is a great sense that everyone including our heroes is in danger. But then we catch up with Keneely and Farrel's Sargent Kenefick (John Lawrence) and we're right back to some comedic bits. While the movie may not be all "yuk yuk yuk" and obvious setups for humor, it can be a bit distracting to jump around. I understand this is supposed to be a cynical movie but in the end it's more sarcastic than anything.

At the end of the day, 'Busting' is another 70s era cop thriller at heart. It plays off that time period's sense of distrust and paranoia as well as the sense that nothing anyone can do will be worth a damn. To that effect, 'Busting' works and the film offers up some solid serviceable entertainment. I just wish it had been a bit more tightly knit together so this story could have fired on all cylinders. As it stands, it's fun, but if you're new to the film don't expect to have your hair blown back. Just let the ride happen and you should be okay.

'Busting' arrives on Blu-ray from Kino Lorber through their Studio Classics line. Pressed on a Region A locked BD25 disc, the disc comes housed in a standard case with reversible artwork. The disc opens directly to the main menu.

With a fresh HD remaster, 'Busting' makes a clean and neat transition to Blu-ray with this 1.85:1 1080p transfer. With fine film grain retained detail levels are all around very strong. Some middle shots and long shots have that typical 70s softness to them, but otherwise the film looks pretty fantastic and the grain structure is never very intrusive. Colors have plenty of primary pop - blues and reds in particular. Flesh tones can skew slightly pink but still stable looking. Black levels are intermittently very strong allowing for a nice three-dimensional looking image, and then some sequences, in particular right after the grocery store shootout, that can look absolutely crushed to the point that it can be very difficult to see anything at all. On the opposite side of the spectrum are the numerous visible lights, the bare bulbs can create a hazy, haloing effect that can be off-putting. To that effect the image - while a very clear improvement on Blu-ray - isn't quite a home run. It's still very good, but age and perhaps some inherent faults in the elements keep this one from looking truly amazing.

'Busting' earns some strong marks for its English DTS-HD MA 2.0 audio track. From the solid score from Billy Goldenberg to the film's use of atmospherics and ambient sounds to the crystal clear dialogue, it's very difficult to find much fault against this track. Imaging offers plenty of stereo channel movement, especially during the film's action beats. While the track keeps to the midranges, there is plenty of extra oomph coming through to give the audio a nice life-like presence. Levels are nicely balanced even through the quieter conversational moments and the shootout action beats so you shouldn't have to adjust your volume any. All around this is a fantastic audio track that fits the film's Blu-ray presentation nicely.

Audio Commentary: Elliot Gould and film critic Kim Morgan do a great job together at keeping the track lively and informative. It's really fun to hear Gould's thoughts on the casting and the production process of the film all these years removed. Note: This is a selected scenes commentary - it's not 100% complete and totals about 50 minutes of the film's runtime.

Audio Commentary: Directer Peter Hyams flies solo here and does a pretty good job keeping the information coming throughout the movie. It would have been great if he had someone to work off of, as there are several spaces in the commentary, but just the same it's a solid informative listen.

Busting Trailer: (HD 2:45) This is an awesome trailer that makes the movie look like a piece of 70s exploitation genre filmmaking.

The Long Goodbye Trailer: (2:31) A strong trailer that feels like it can give a bit too much of the movie away.

Making a good movie is harder than it looks. One wants to entertain, but at the same time there is a need to tell an interesting story that feels fresh and new. 'Busting' plays to the strengths of a Buddy Cop/Action movie while also pushing some Crime/Thriller buttons. The results may be a bit inconsistent, but at the same time, there is no denying the entertainment value with this Peter Hyams directed flick. Kino Lorber has done a solid job putting this disc together, offering a pretty decent A/V presentation with two extensive and interesting audio commentary tracks in addition to a couple of fun trailers. 'Busting' is a solid release that I am calling recommended.

Sale Price 74.99
List Price 85.81
Buy Now
3rd Party 74.99
In Stock.
See what people are saying about this story or others
See Comments in Forum
Previous Next
Pre-Orders
Tomorrow's latest releases