Young surfer Nick (Josh Hutcherson) thinks all his dreams have come true when he goes to visit his brother in Colombia. Against an idyllic backdrop of blue lagoons and white beaches, he falls madly in love with Maria (Claudia Traisac,"Cuentame"). It all seems perfect until he meets her uncle, the famous drug kingpin Pablo Escobar (Benicio Del Toro) and he finds his life is on the line when he's pulled into the dangerous world of the family business.

The central idea of getting "in too deep" has proven to be the foundation for countless thrillers throughout the ages. Whether it's someone falling for the wrong person, or making a bad business deal with the wrong type of people - the crux of the plot usually revolves around someone making just one bad decision. When you look back through the film, that single decision, that inciting incident is the entire reason for the film to exist at all, so when a character makes that decision it had better be pretty darn important. With Andrea Di Stefano's 'Escobar: Paradise Lost' that big decision actually is a series of small bad turns of events that puts the film's leading character face to face with one of the most notorious drug kingpins in the world.

For Nick (Josh Hutcherson), life is all about surfing. Not only does he want to catch some waves, he wants to open up his own shop. Along with his brother Dylan (Brady Corbet), Nick is in search of the best beaches and the great waves that come with them. Apparently after skipping over Malibu, California and the entire coast of Australia, Nick and Dylan have decided that Columbia is the place to be to ride the waves - in spite of the rampant corruption or the drug wars. After catching a wave or two, Nick meets the beautiful Maria (Claudia Traisac) and it doesn't take long for the two to become lovers.

As Nick and Maria's relationship grows, the requirement to meet the young woman's family. Who Nick doesn't expect to meet face to face is the world's most notorious drug kingpins who controls nearly all of the cocaine produced in the world, Pablo Escobar (Benicio Del Toro). Escobar just happens to be Maria's Uncle and the man is exceedingly protective of his family and is understandably cautious around outsiders. While Uncle Escobar has his reservations about Maria dating Nick, the two become fast friends. Nick sees in Escobar a sort of father figure, a man of honor and respect that once earned you dare not betray.

When troubles start to mount for Escobar, he has no other choice but to turn to Nick for a little bit of help. Since Nick is an outsider, Escobar knows there isn't any chance of betrayal - the only problem for Nick is that this mission could cost him his relationship with Maria. By taking this task, Nick risks his life and freedom but ensures he can still see Maria. If he doesn't take this task, Nick loses Maria but saves his soul and life. How he weighs this decision and the path he takes could have disastrous outcomes. 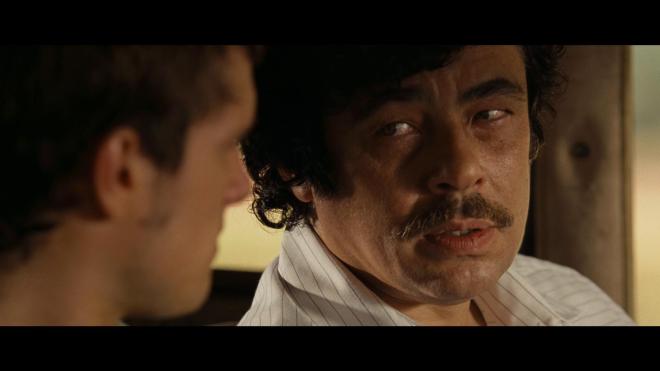 Expectations are certainly something viewers going into 'Escobar: Paradise Lost' are absolutely going to have to keep in check. Is the film bad? Not really, it's actually pretty suspenseful in places and the performances from the leads Josh Hutcherson and Benicio Del Toro are spot on. Is it an accurate retelling of events that lead to the downfall of one of the most nefarious international criminals? Nope. This movie is not at all about Pablo Escobar. He's there, sure, and some of the plot points revolve around actual events, they're not the main thrust of the film. His presence is really only a tangent involvement. In point of fact, Benicio Del Toro's character could have been named anything but "Pablo Escobar" and the film would have worked just fine. By involving such a polarizing real-life international figure, the film adds a lot of extra weight and plot baggage that it didn't need to be saddled with.

This is where the film ultimately fails me. I wanted a biopic about Escobar himself. I didn't want to see a love story about a guy from Canada meeting a girl in Columbia. While it's a nice story and the added danger element of the girl's family being tied up in the drug trade is tantalizing, it isn't nearly as interesting as the titular character. Escobar was a man who controlled 80% or more of the world wide cocaine distribution through his Medellin Cartel. It's also worth noting that he was worth upwards of $30,000,000,000 and even made it into Forbes Magazine! For my money, that is a far more interesting story and would do Benicio Del Toro's acting efforts some justice.

I will say that 'Escobar: Paradise Lost' was a good movie, it just wasn't the movie I wanted to actually see. I enjoyed the dynamic between Benicio Del Toro and Josh Hutcherson, it was a sinister cat and mouse type game where every exchange between the two features the right amount of menace. As a sort of criminal fantasy movie, it works. As a biographical account, it doesn't make the grade. Like I said earlier, expectations need to be in check before heading into this one. It is certainly a film I don't regret seeing in any way, but I am having the hardest time shaking that I could have seen a different movie that would have left my movie viewing needs a bit more fulfilled.

'Escobar: Paradise Lost' arrives on Blu-ray thanks to Anchor Bay pressed onto a Region A locked BD50 disc. Housed in a standard case, the disc opens to a couple of trailers before reaching the main menu with basic navigational options.

For the most part, 'Escobar: Paradise Lost' features a beautifully detailed and colorful 2.35:1 1080p transfer. Details are fairly strong, but the film itself maintains a sort of dream-like softness to it that keeps it from being as fully detailed as it probably could. That isn't to say you don't get to see the finer facial features or architecture. Colors are rich and vibrant and offer plenty of primary pop, especially the green Panamanian scenery that doubled for Columbia. Flesh tones can skew slightly pink, but not too severe. My only real gripes with this transfer rest with some slightly unstable black levels that dip into some crush territories and doesn't offer much in the way of depth or dimensional pop. Also, there are a couple of notable instances of banding, they're infrequent, but when they pop up it's visibly obvious. All around this isn't a terrible transfer by any stretch, it just has a couple of issues keeping it from being a true knockout.

'Escobar: Paradise Lost' enjoys a fairly robust DTS-HD MA 5.1 audio track. The film is largely a very conversational work with sparse active moments, so the surrounds are never truly as engaged as they could be. While the dialogue comes through crisp and clear, the rest of the track is dedicated to accommodating some subtle atmospheric elements that add some character to various scenes. The beautiful score from composer Max Richter is pleasing and compliments the track nicely and doesn't overpower the rest of the audio elements. The track is well balanced and keeps to the midranges, gunshots and some of the last act action beats spice things up a bit, but there shouldn't be any need to adjust your volume. All around this is a fantastic track that complements this film nicely.

Catching Pablo - The Making of Escobar: Paradise Lost: (HD 31:23) Much better than your standard EPK making of feature featuring writer and director Andrea Di Stefano as well as some cast and crew interviews talking about the making of the film, where he drew inspiration from and the production process. You get a lot worthwhile information here.

'Escobar: Paradise Lost' is an all around pretty good movie, it just wasn't the movie I wish that I had seen. It's hard to blend a fictional story with a real life character, but the filmmakers and the cast handle the material well enough to create a nice family drama/thriller. Anchor Bay brings the film to Blu-ray with a strong but flawed video presentation and a robust audio track. Extras a slim, but the single making of feature is well worth a watch. At the end of the day, I'm calling this one as being worth a look. It was good, but it didn't amaze me. Fans of the film should be very happy with this Blu-ray release.

Sale Price 11
List Price 17.99
Buy Now
3rd Party 17.99
In Stock.
See what people are saying about this story or others
See Comments in Forum
Previous Next
Pre-Orders
Tomorrow's latest releases